One of the best things to come out of the COP21: Brandalism, exposing the corporate sponsors of the climate summit with huge fake ads at bus stops!

Arctic Indigenous at COP21 'Our world is melting'


Indigenous warn: COP21 green schemes could be crimes against humanity

Indigenous Peoples in Paris at the United Climate Summit COP21, are exposing the facts of the polluters destroying their homelands, and the green schemes designed for the rich to get richer.
“Our world is melting,” said Allison Akootchook Warden from Alaska Arctic village Kaktovik. “Climate change and global warming is a reality in my home.”
Indigenous Peoples joined a human chain around Paris on Sunday, and offered prayers at the site of the recent tragedy in Paris. They were joined with support by France's Committee in Solidarity with American Indians in Paris.
Warden is among the Indigenous Peoples here from Alaska and around the world who live every day with the impacts of the destruction of this planet.
“The failure of the United States, Canada and world leaders to take real action to address the climate crisis violates our rights. The draft Paris Accord is full of carbon market mechanisms that are already causing harm to the Indigenous Peoples of the Arctic Circle.”
Arriving in Paris from the north was Crystal Lameman of the Beaver Lake Cree Nation, Alberta, Canada.
“After 21 years of these climate conferences, our First Nation wants to be hopeful this agreement truly stops a history of CO2lonialism and business-as-usual with expansion of fossil fuel exploitation on and near indigenous territories,” she said in a statement by the Indigenous Environmental Network.

“We are here to protect, defend and renew our Mother Earth, not to rubber stamp an agreement that allows polluters to continue to burn the planet. False solutions such as carbon trading, carbon offsets, agrofuels and nuclear energy will probably be the basis of the Paris Accord and the so-called decarbonization of the global economy.”
“False solutions to climate change instead of solving the climate crisis, are resulting in land grabs, human rights violations and will allow global warming to spiral out of control," said Lameman, featured in the film, “This Changes Everything” directed by Avi Lewis and based on the book by Naomi Klein.
Tom Goldtooth, executive director of the Indigenous Environmental Network, warns COP 21 could turn out to be a crime against humanity.
“We are here in Paris to tell the world that not only will the anticipated Paris Accord not address climate change, it will make it worst because it will promote false solutions and not keep fossil fuels from being extracted and burned.”
" 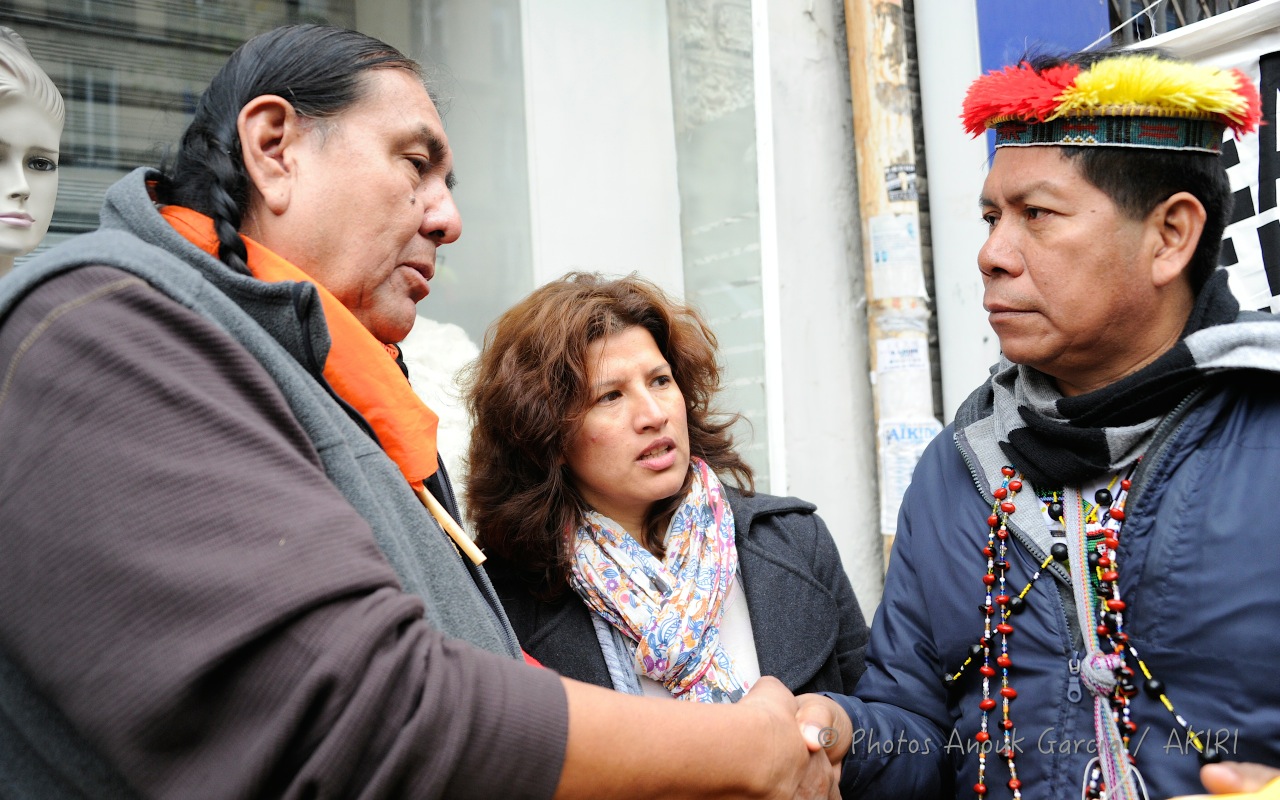 The Paris COP21 is not about reaching a legally binding agreement on cutting greenhouse gases. In fact, the Paris Accord may turn out to be a crime against humanity and Mother Earth,” according to Goldtooth. IEN is based in Minnesota on Turtle Island also known as the United States. Goldtooth recently won the Gandhi Peace Award.
Indigenous leaders throughout the world are particularly concerned about REDD (Reducing Emissions from Deforestation and forest Degradation), a United Nations carbon offset mechanism that uses forests, agriculture and many other ecosystems as sponges for northern industrialized countries pollution instead of reducing emissions at source.
Kandi Mossett, Mandan, Hidatsa, Arikara Nations in North Dakota, is  a campaigner with the Indigenous Environmental Network. Mossett’s home is surrounded by coal-fired power plants and inundated with fracking and flaring of natural gas.
“The current US Clean Power Plan allows the US to continue with carbon trading schemes such as REDD+ designed to allow more extraction and combustion of fossil fuels for a profit." 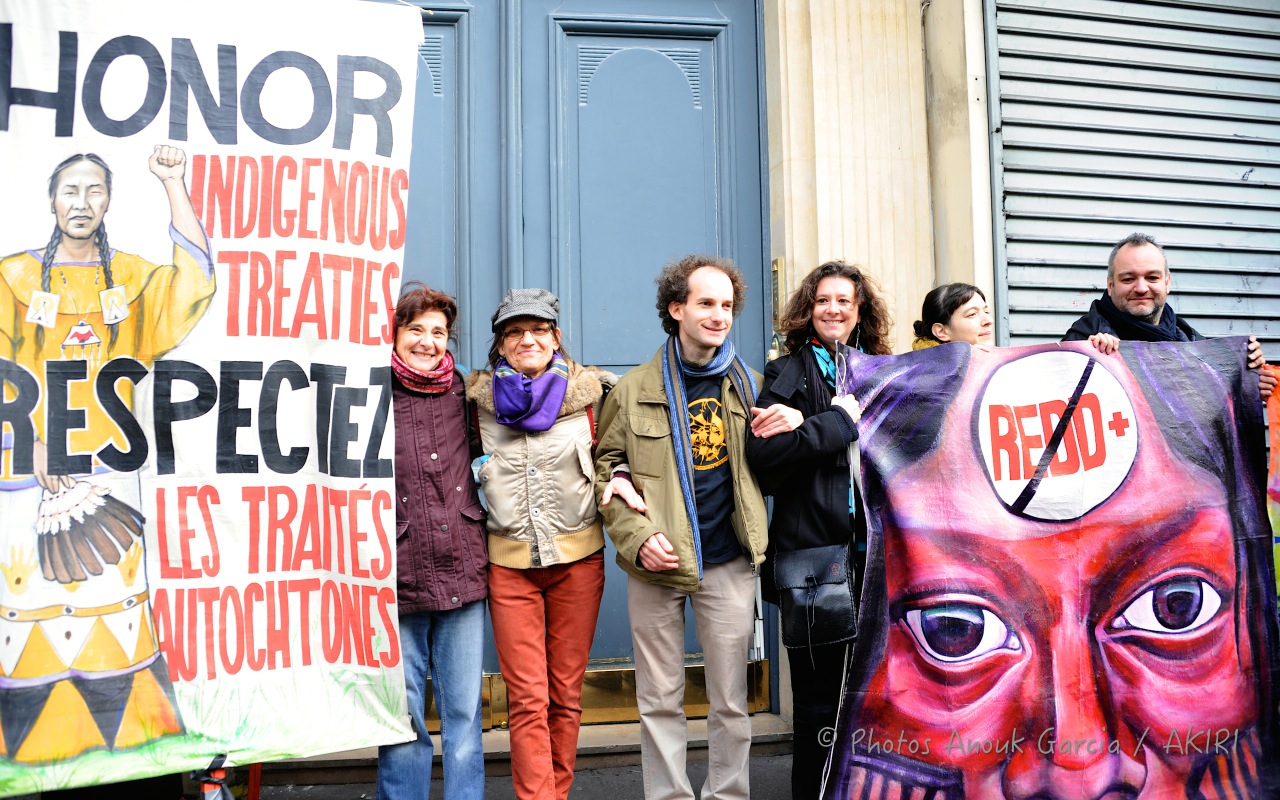 “The whole concept is a false solution to the climate crisis because it allows the US to buy up ‘carbon credits’ often on Indigenous lands in other countries while simultaneously destroying Indigenous homelands in the US essentially making us sacrifice zones for the good of the economy; Indigenous peoples are not expendable and will not sit idly by and allow this desecration to continue without a fight.”
The Global Alliance against REDD identifies it as a false solution.
“Instead of cutting CO2 and greenhouse gas emissions, the UN, the US, the EU, China, Norway and climate criminals like BP, Total, Shell, Chevron, Air France and BHP Billiton are pushing a false solution to climate change called REDD.”
Nnimmo Bassey, co-coordinator of the No REDD in Africa Network, said the REDD scheme is another land grab.
“REDD may result in the largest land grab in history. It steals your future, lets polluters off the hook and is new form of colonialism. We demand that states and corporations stop privatizing nature!”