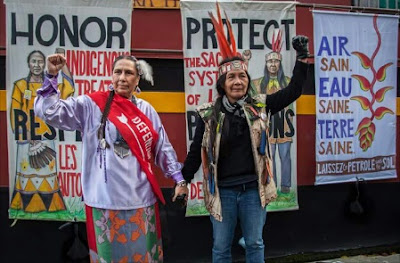 Mohawk Nation News
Please post & distribute.
MNN. Dec. 5, 2015. Imperial Tobacco initially set up the “contraband” market in the early 1990s taking advantage of our sovereignty and tax-exempt rights. Brand name “cigarets” were shipped to Buffalo and Syracuse in New York State, supposedly for sale there. No taxes were paid to Canada. Then the product was sold to middlemen, brought back to Canada for sale at very low prices. Sales rose from $800 million a year to $6 billion by 1993. Policing agencies – NYS Troopers, SQ, OPP, army, politicians, corporations and all CROWN entities – were part of the the plan to attack. Judges, lawyers, stores, cigarette companies and others were involved. They didn’t want any competition.

Gallant Piper & Scorpion Saxon, 1996, all dressed up!”
Tobacco is an onkwe’hon:weh plant. We have every right to use it to achieve economic sustainability in anyway that we deem necessary. Our businesses are legitimate based on the law of the land. We could purchase and sell anything to whoever without charging taxes, as reflected by the Jay Treaty 1794, the treaty of trade and commerce. Then we set up our own manufacturing and marketing of our own tobacco products. Big tobacco and everyone else were by-passed.

They tried to destroy Iroquois sovereignty and put us out of business to bolster their monopoly on that trade. US, Canada and big tobacco are still pressing this economic button. Corporate by-laws were passed overriding our sovereignty and international law. Prices are manipulated. All taxation is  remitted to the City of London. To force our compliance to their rules, military operations were mounted. Our legitimate businesses are falsely called “organized crime”. We are threatened with criminalization and death. We will always defend our sovereignty to the end of time.
In 1996 fully armed military death squads were set up to invade our unarmed communities. 1800s American genocide policies were invoked [Wounded Knee, Sand Creek, etc.]. In the US it was operation “Gallant Piper” and in Canada it was operation “Scorpion Saxon”.  Then in 1997 New York State Troopers attacked us in Onondaga, for which they will be standing trial in January 2016.
Big tobacco – Rothmans, Imperial and R.J. Reynolds – Canada and US are still trying to interrupt our economic process to eliminate competition to their exorbitant prices. NYS continues to stall the trial, which is now almost 20 years old.

Read how CANADA DECLARES WAR ON THE MOHAWKS.
Roger Miller sings about the economic predicament the bankers try to put the Mohawks in: “Third box car, midnight train, destination Bangor Maine. Old worn out clothes and shoes. I don’t pay no union dues. I smoke old stogies I have found. Short, but not too big a’round. I am a man of means, by no means, king of the road!” [King of the Road].
MNN Mohawk Nation News kahentinetha2@yahoo.com or more news, to donate and sign up for MNN newsletters, go to www.mohawknationnews.com More stories at MNN Archives. Address: Box 991, Kahnawake [Quebec, Canada] J0L 1B0thahoketoteh@ntk.com or original Mohawk music visithttps://soundcloud.com/thahoketoteh
San Bernadino media hoax.

COP21 in Paris is very quiet about coal-fired power plants poisoning the world.
Navajos remain poisoned by Peabody Coal and the Navajo Generating Station, while Phoenix and Tucson reap the benefits of electricity.
"The Navajo Generating Station is the nation's third largest emitter of carbon dioxide, climate warming gases, of any power facility in the country. In addition to the carbon dioxide, it has historically emitted enormous amounts of nitrogen oxide, mercury, going back some years, sulfur dioxide and a slew of other pollutants that have essentially blanketed that part of the country in a fog of haze and smog," NPR reported in 2015.
Navajo Generating Station is responsible for the dirty brown smog you see when you fly over the Grand Canyon.
The profiteers behind Peabody Coal and this power plant are responsible for the relocation of 14,000 Navajos and forcing the resisters into harsh lives of survival.
Navajo Generating Station is one of three coal-fired power plants located on the Navajo Nation, with the electricity primarily going to non-Navajos in the Southwest.
The media in the region has failed the people, and failed to expose it, resulting in more misery and death.
At COP21 in Paris, the corporate sponsors include some of the world's top financiers of coal-fired power plants.

"Sponsored by the likes of dirty energy giant Engie (formerly GDF Suez, also an official sponsor of COP21) alongside fracking enthusiast Suez Environment and agrofuels giant Avril-Sofiproteol, the event at the Grand Palais will also welcome Vinci, the company behind the proposed airport at Notre-Dame-des-Landes, coal financiers HSBC and BNP Paribas, and Coca-Cola, among many others."
at December 07, 2015 No comments: 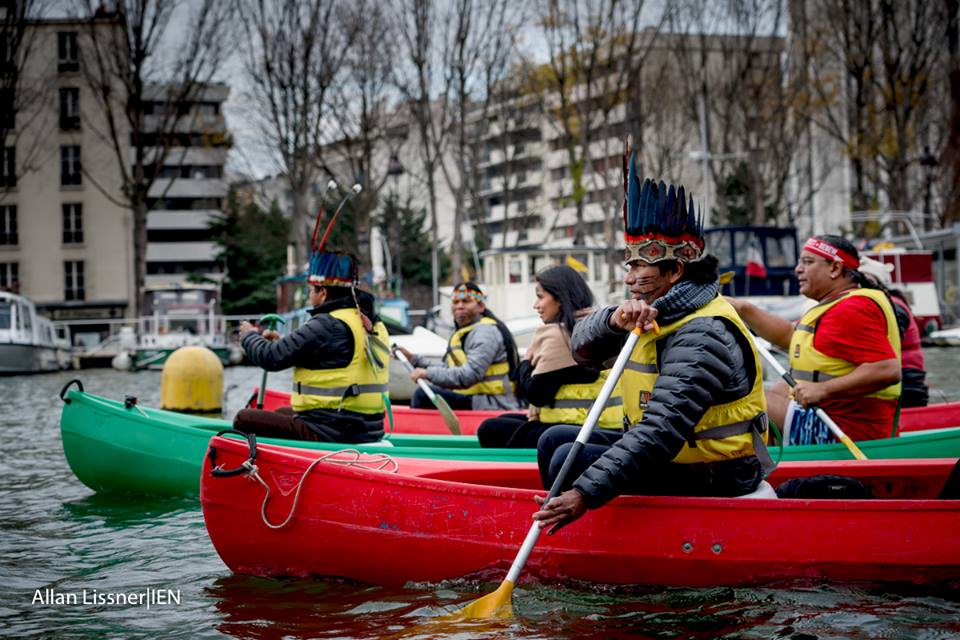 Indigenous Peoples in canoes and kayaks from the Americas delivered powerful messages of “Leave fossil fuels in the ground,” and “Protect sacred water,” as the United Nations COP21 negotiations in Paris continued to exclude Indigenous rights, while promoting “greenwashers” and corporate profiteers.
During today’s Canoes 2 Paris Flotilla, Indigenous Peoples warned of the worst consequences of climate change, and offered solutions to protect Mother Earth. The event was proposed by the Kichwa community of the Sarayaku in the Amazon, and included Indigenous Peoples from as far away as the Arctic.
Today’s Flotilla served as a platform to reject false climate solutions, and to deliver key documents designed as a means to address climate change.
The Indigenous Environmental Network and Amazon Watch launched the event calling on world leaders to keep fossil fuels in the ground, which was signed by over 150 organizations. 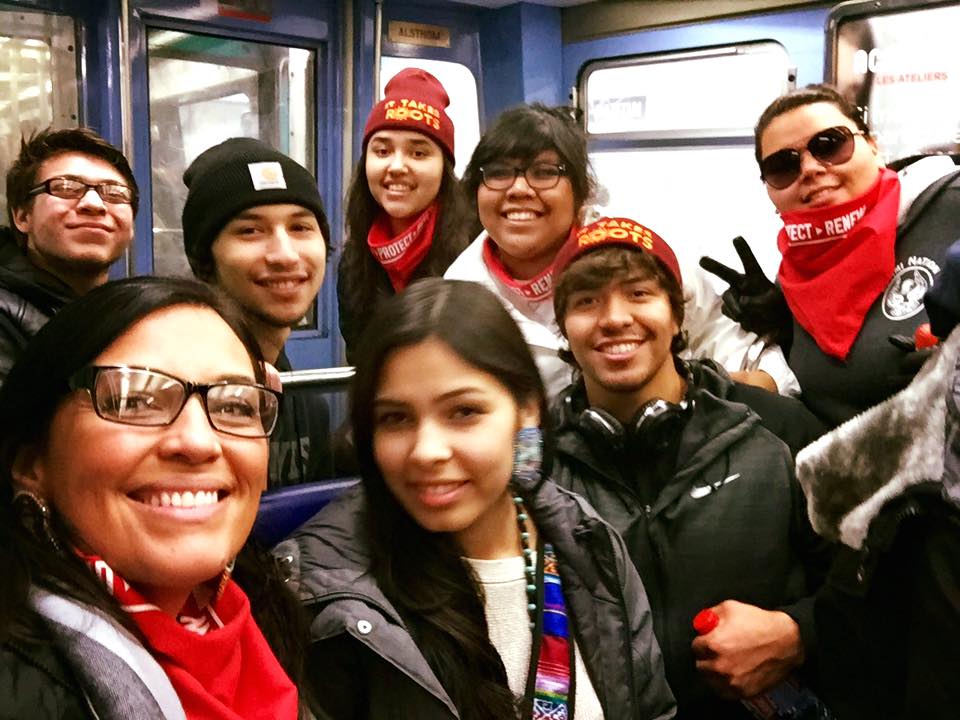 Lummi youths from the Pacific Northwest, were among those from the Americas journeying to Paris for the Flotilla. (Photo right by Deborah Parker.)
Felix Santi, Sarayaku, said, “We’re here to present our proposal of kawsak-sacha: the living rainforest, the living Amazon. This proposal respects all living beings and helps achieve a balance of our planet, our Mother Earth. Indigenous peoples live with this wisdom – live in harmony with these living beings, and we’re here to protect the lagoons and the water, the trees and the mountains. We are the balance, we live the balance and this is our contribution here in Paris.”
“Only if our proposal is heeded will we be able to ensure the future, ensure the planet for future generations – so we present this proposal to the governments of the world and we declare indigenous peoples’ territories of vital and crucial importance to the future of our planet. There must be no more oil drilling, no more mining, no more logging on our lands and territories, and we must embrace this indigenous proposal of the living forest.”
The Kawsak Sacha “Living Forest” proposal was presented from the Amazon rainforest by the Kichwa Indigenous people of Sarayaku. The Indigenous flotilla on the Bassin de la Villette, included  Sarayaku’s “Canoe of Life,” which has traveled 6000 miles to Paris with a message from the Amazon.
During this week’s events, Kandi Mossett, Mandan, Hidatsa and Arikara from North Dakota, challenged the corporate profiteers at COP21.
“You are killing our people,” Mossett told Suez, among the oil and gas industries in COP21’s corporate side event. As Mossett spoke out against the false solutions, undercover police rushed in and arrested two of the activists. The dramatic call-out of corporate profiteers, as police rushed in, was caught on video by the New Internationalist.
Mossett, who was not arrested, brought the passionate truth of her people who are dying from the disease and destruction, crime and violence, of oil and gas drilling, and fracking, in North Dakota.
Today, Indigenous women leaders of the North and South Americas signed a first ever treaty agreement, declaring solidarity in the movement to protect Mother Earth from extractive industries. (Photo below by Ayse Gursoz.)
Indigenous Peoples protested this week as official negotiations threatened to exclude Indigenous rights. 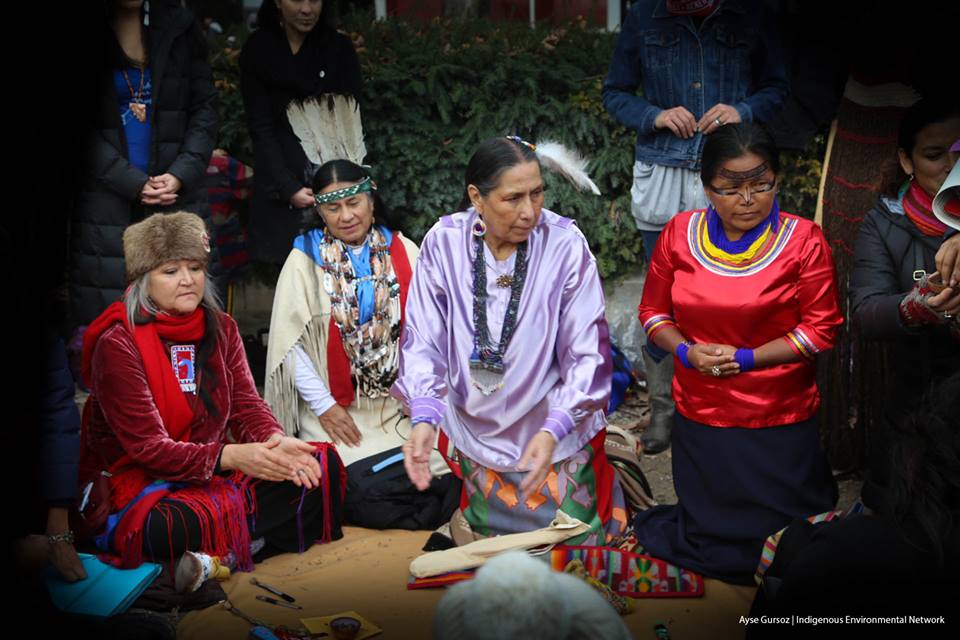 “The flotilla action this afternoon was made all the more poignant and necessary, following the first week of negotiations at COP21, where – despite vocal objections and protestations by Indigenous Peoples and their allies – the operative text of the Paris Accord has had the language concerning the rights of Indigenous Peoples ‘annexed’ (meaning it’s not totally in the draft agreement, nor is it being fully excluded), rendering it’s future inclusion questionable.”
Indigenous Peoples from the Amazon to the Arctic and their allies said in a statement that they will continue to gather to demand real climate solutions, including bottom-up initiatives originating in Indigenous knowledge, culture, and spirituality.
For the second week of negotiations in Paris, Indigenous delegates are calling on their allies to push the parties involved in direct negotiations to reverse this damaging decision, thereby taking the climate change movement forwards, not backwards.
D 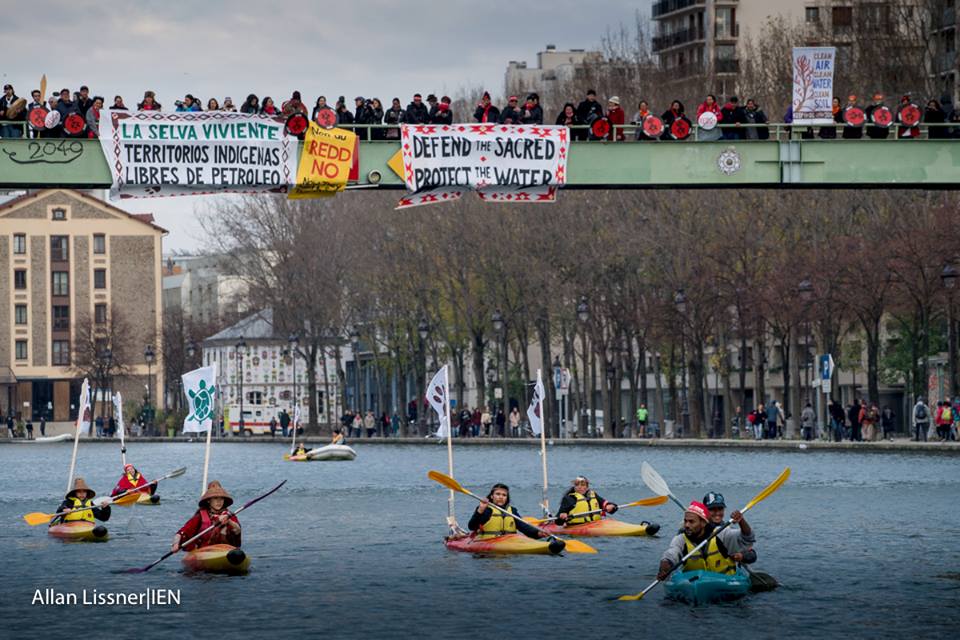 uring today's Flotilla, delegations from the Arctic spoke out. They recently fought Shell’s drilling in the Arctic and now are fighting to defend the Arctic National Wildlife Refuge.
“The ground we walk on is literally melting beneath us. Indigenous peoples of the world are being affected by this climate chaos first, and our issues are compounded by the assault on our traditional territories by the fossil fuel extractive industries,” said Faith Gemmill, executive director REDOIL.
“We kicked Shell out of the Arctic but immediately following that, the state and our congressional representatives called for drilling in the last 5 percent of America’s only Arctic coast: the Arctic National Wildlife Refuge, which is sacred to my people. This is our home, these are our sacred places, and it is our belief that the destruction of humanity begins if/when the oil companies gain access to these sacred places. We’re here to call upon the governments of the world to recognize the rights of Indigenous Peoples within the operative, legally binding text. No more business as usual – we don’t have the luxury of time. Humanity’s survival is on the line.  We need a just transition to sustainable energy, economies and communities.”