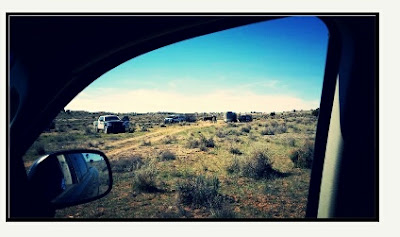 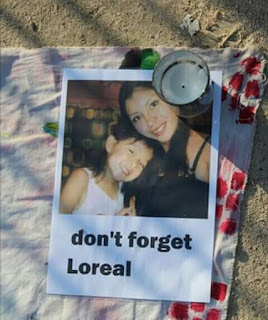 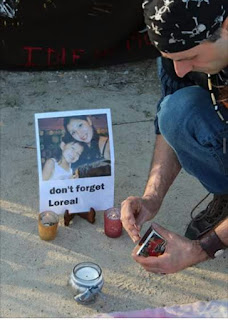 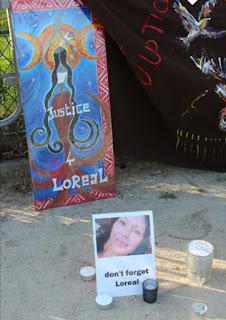 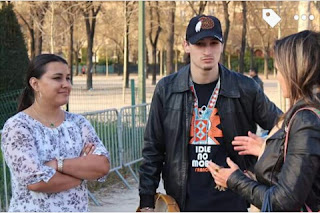 Vigil in Paris France for Loreal Tsingine, Dineh (Navajo) 27, murdered by Winslow Arizona Police Officer. The officer had a history of misconduct and is linked to right wing extremists.
More at Censored News
http://bsnorrell.blogspot.com/2016/04/winslow-police-protest-justice-for.html?m=1 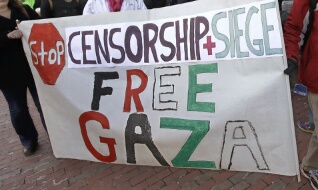 Why was the Nakba Tour Canceled at Stanford?

Last night, Mariam Fathalla and Amena Elashkar were scheduled to speak at Stanford University, sponsored by Students for Justice in Palestine. The previous day, I had asked Alison Weir, who has been giving talks on Palestine for 15 years all over the country, to meet with Amena and give her advice on reaching American audiences since this is Amena's first trip to the U.S. It was an excellent, fruitful meeting.
I then said it would be valuable if Alison could hear Amena's presentation to see if she would have any suggestions. Alison is extremely busy but agreed to come down to Stanford with us for that purpose.
When Alison learned we did not yet have any written materials along to provide the audience, she brought some along with her for us to use and also gave us some of her books that we could sell to help raise money for the tour. We had already discussed that IAK would supply their excellent written materials for the tour.
We had no idea that Alison would turn out to be an issue, or that some members of the Stanford SJP would object to what Amena might wish to say.  We view Alison as an extremely committed and popular antiracist writer, speaker, and activist, and people even follow her work in refugee camps in Lebanon.  We know that some groups oppose her and If Americans Knew, but we also think that most do not, and that in any case this should not be an issue in the Nakba Tour.  Alison, however, is not not one of the national organizers of the tour, and she was not intended to be one of the speakers or to have any role in the presentation at Stanford. She was simply there as a favor to us, as described above.
However, some members of the SJP immediately objected to Alison's presence, perhaps assuming she was going to speak, and also to the presence of her book and the If Americans Knew materials. We immediately explained that Alison was not to be a speaker and was just there to sit in the audience and that we had invited her to come with us. We also agreed to remove the books, but said we were disturbed that they also wished to censor the materials we could make available on our own tour. In all my years of activism, I've never heard of such a thing.

Amena then began discussing the situation with the students, and was extremely upset when they told her that she could not speak truthfully about her feelings and the feelings of the thousands of dispossessed Palestinian refugees living in camps about their situation, about the Nakba, and about whether or not Israel has "the right to exist" that Israel partisans claim.  This was not an issue at the two previous talks.
When it became clear that they wished Amena to censor her excellent talk, she refused to do so and the event was canceled.
We think it is extremely important that people hear from Amena and Mariam. They represent millions of Palestinian refugees whose rights and views have been trampled upon and who are often ignored. Thank you for helping us bring their voice to the discussion. It is long past time that they are heard.
If you have any questions, please feel free to contact me.
Paul Larudee, Tour Coordinator


To unsubscribe from this list send a blank email to fpm.news-unsubscribe@lists.riseup.net.

For more options or help visit https://help.riseup.net/en/lists/list-user/subscribing.
at April 07, 2016 No comments: