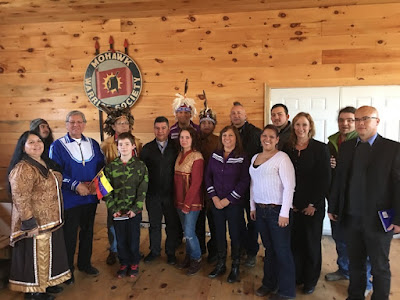 A Condor Lands on Eagle Hill

THE VENEZUELAN AMBASSADOR COMES TO TYENDINAGA

TYENDINAGA – On Friday March 11th, 2016, His Excellency Wilmer Omar Barrientos Fernandez, the Venezuelan Ambassador to Canada, arrived in Tyendinaga Mohawk Territory to build greater relations between the Onkwehon:we and the Venezuelan people. Tyendinaga is the home of Deganawida, the Peacemaker who brought the Kayenere:kowa or Great Peace to the Haudenosaunee people. The ambassador paid a visit to Eagle Hill, the birthplace of the Peacemaker, and the place where the thinking behind the Kayenere:kowa emerged.
In Tyendinaga, the ambassador met with representatives of the Kanyenkehaka, Onondaga, and Cayuga Rotiskanegethe from Akwesasne, Tyendinaga and Six Nations. Rotiskanegethe are men belonging to the 49 clan families that make up the Haudenosaunee Confederacy, and who hold the responsibility of ensuring the safety of the people and the security of the territory. 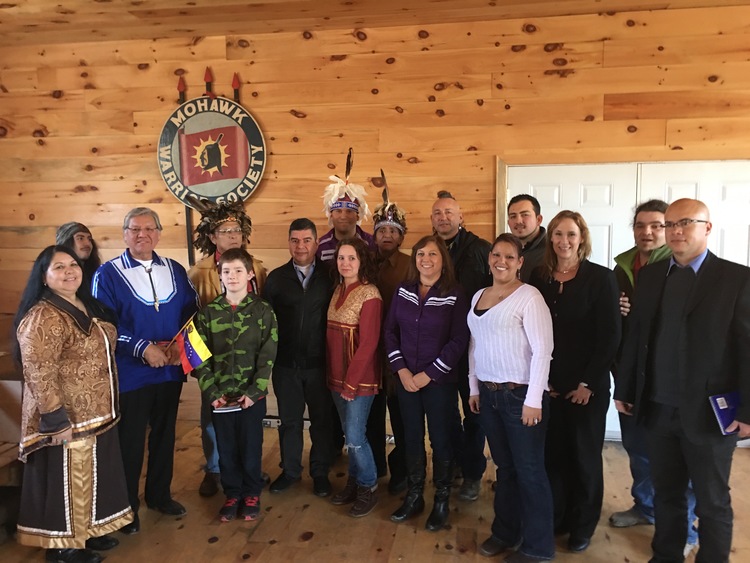 The Venezuelan delegation and the Onkwehon:we poses for group picture.
Since his arrival in Canada, Ambassador Barrientos has expressed an interest in getting to know the original peoples of this land. He has met with the Algonquin people, attended a social and engaged in a diplomatic visit at the Mohawk Longhouse in Six Nations, built relationships with the Oneidas of the Thames, and in his remarks at the Tyendinaga longhouse on Friday, the ambassador mentioned that Mohawk people in Montreal had made him aware of the Kayenere:kowa, and had provided him with a written version of the Constitution of the Five Nations, which he has been examining.
Upon arrival in Tyendinaga, the ambassador was welcomed with the performing of the Edge of the Woods ceremony, and the Venezuelan delegation was provided with a drink of water to quench their thirst and clear their throats so that they could speak clearly. The meeting was opened with the Thanksgiving Address – the words that come before all else.
Ateronhiatakon, the spokesperson for the Rotiskanegethe, welcomed the ambassador and stated that “we did not have too much time to contemplate what it would be that would rest in your mind easily to discuss. We simply say to you that although we have spoken briefly about it, we would like to hear what is in your mind, as you travel here to our humble territory, our humble lands. We offer you water to comfort you and allow you time to catch your breath so that you can find the words that you would like to share with us.” 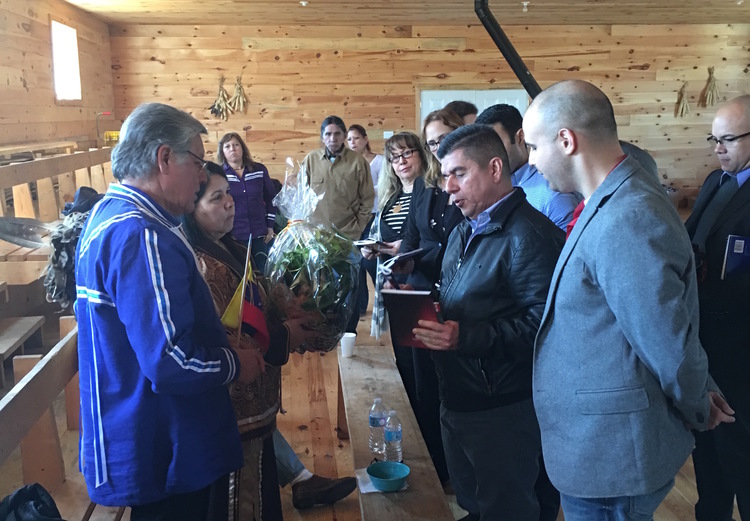 Gifts are exchanged between the Onkwehon:we and the Ambassador.
The Ambassador began his address to the gathering by stating that “all the way from my country, we salute you and we greet you on behalf of our government, and especially on behalf of our Indigenous communities.”
The Ambassador remarked that it had been one year since his reception at the Mohawk Longhouse in Six Nations and that he was still greatly moved by that experience.
The Ambassador reflected on the way in which Indigenous peoples and their way of thinking have affected him. Once the overall commander in charge of the armed forces of Venezuela, the Ambassador spoke about how he used to eat meals and stay the night in indigenous people’s homes while visiting their communities. “And you start to realize their connection to the Mother Earth. And also their communal organization that they have, in which everyone owns everything, and not a single person is the owner.” Ambassador Barrientos praised the approach of the Indigenous. “They lead a perfect example against the selfishness that our current society has inflicted upon us. They have been creating a selfish man. Individualist man. Mercantilist man. A consumerist man who doesn’t appreciate their environment.”
The Ambassador spoke of the practices of thanksgiving in other Indigenous communities that he has witnessed. “When I was sharing experiences with my Indigenous brothers in the south of Venezuela, whenever they would hunt or whenever they would gather any fruit, they would thank Mother Earth, and they would ask for forgiveness.”

This approach is in marked opposition to the way of life in modern capitalist societies. As the Ambassador put it, “Our modern societies, we do great harm, and we don’t care about it. And the result we can see. We can see the temperature has been changing, many systems have been changing. It’s been affecting our production, and the agriculture. And this is why the message that we find a common element, all the way from the Patagonia until here, in the north, where our Indigenous brothers talk about their relationship and the love for Mother Earth, that has to be a message that cannot be stopped. We must keep going and we must multiply their message.”
According to the Ambassador, the indigenous people are “speaking the language that modern society has started to forget. The language of love, the language of brotherhood, and the language of peace.” 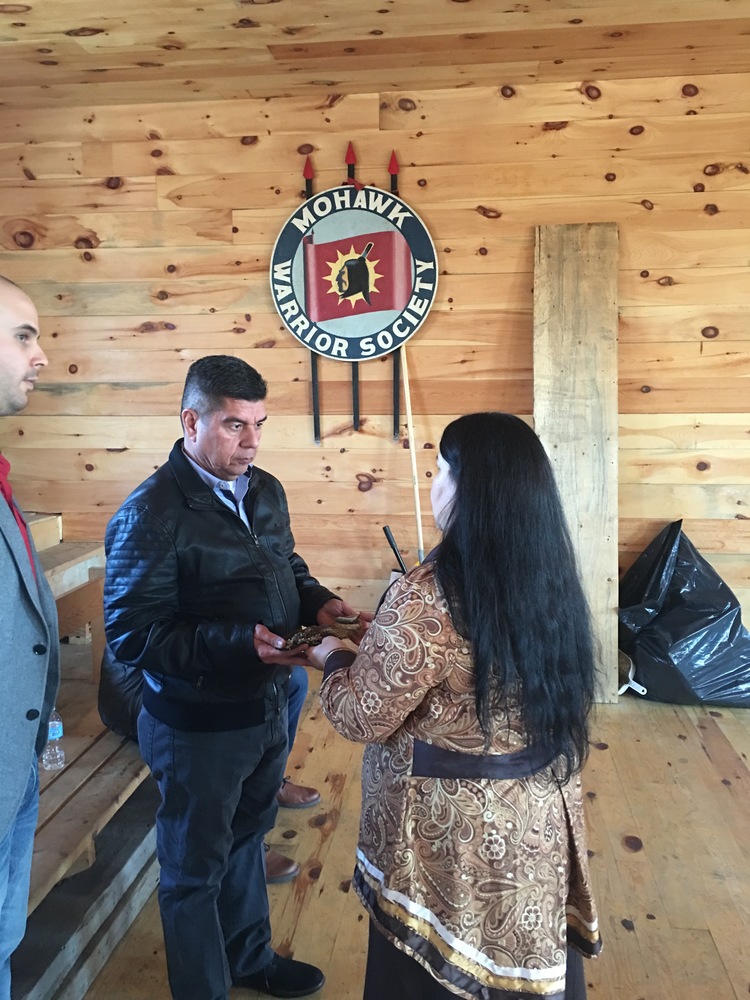 The Ambassador’s intent of seeking to amplify Indigenous voices speaking this language of love, brotherhood and peace resonated with the Onkwehon:we people who were present, and it is clear that they saw his speech as sincere, as they expressed their approval with much that the Ambassador said.
In response to the Ambassador’s speech, Kariwanoron of the Wolf Clan spoke on behalf of the women of the community and welcomed the Ambassador to “the land of the Peacemaker.” She added that “it seems very appropriate to me that you have found your way to us here, and that we have so many similar connections.”
Kariwanoron pointed out that among the Kanyenkehaka people, it was “the women that were in control when the white people came and women are still in those positions to this day. With so much happening in this world, and so many people thinking in different ways, it puts a lot of pressure on keeping it grounded to where we need to be and where we need to start and build from. It is a pleasure to have you here on our land, and we would also like to express to you that the feelings that you’re explaining about your indigenous population are very heartfelt.”
Kariwanoron concluded her remarks to the ambassador saying that “I hope that you get to spend more time meeting with different First Nations people, the original people from this country, to help strengthen your mind on your understanding of our people.”
Other representatives of the Rotiskanegethe also spoke, and the ambassador followed up with a concluding speech indicating his wishes to continue building relationships with the Onkwehonwe. Following the exchange of speeches, the Ambassador and guests were treated to a delicious meal. Strawberry juice sweetened with maple sap from the trees that had just started running was served as a drink, and lunch consisted of Buffalo stew and fry bread.
The ambassador was elated to have eaten buffalo for the first time. He exchanged gifts, receiving an eagle feather from the Rotiskanegethe, and gave a basket of flowers, a Venezuelan flag, and some books in return.
After lunch, members of the delegation gathered for a group photo.
After the visit, the ambassador visited Eagle Hill, the birthplace of Dekaniwidah, the peacemaker who brought the Kayenere:kowa, the founding principles of modern day democracy to the world. On eagle hill the ambassador tasted maple sap for the first time, and learned the story of how the Onkwehon:we discovered how to make maple syrup.
The entire unedited audio of the Ambassador’s visit to the Tyendinaga longhouse is available to Real People’s Media Patreon supporters. Become a Real Peoples Mediasupporter, and you’ll automatically get access to a variety of premium content. Further content from the Ambassador’s visit to Tyendinaga will soon be available on Real Peopels Media.

Note: The emblem hanging on the wall of the Tyendinaga longhouse bearing the words "Mohawk Warrior Society" in front of which the Venezuelan and Onkwehonwe delegations posed, is the original and first drawing of the Unity flag, or warriors flag which was created by Louis Hall in Ganienkeh and which became world famous after the Oka crisis of 1990. The original image hangs in this Tyendinaga longhouse in recognition of the contribution that the community played in helping to support Ganienkeh, the 4000 acre Independent Indian Republic which was established in 1973 in traditional Mohawk Territory in the Mohawk Valley. After a four year standoff with the New York State and Governor Cuomo, Ganienkeh’s autonomy was recognized by the state, and the community continues to operate independently to the present time.

MNN. APR. 9, 2016. The Cuban diplomats came to see the kanion’ke:haka in kahnawake to exchange thoughts . It reminds us of the ancient Incan prophecy about the condor and the eagle joining again to rule the skies.

The Cubans, Venezuelans and Bolivians have recently visited our territories in northern ono’ware:geh, great turtle island, to reestablish or learn about our connection with the great peace and our clan based law. We all want to return to our family based system of governance. It is the natural system that protects our people. Women worldwide will be tracing the white roots of peace to take their natural place in the decision making process or their people.

Thankfully the Cuban 5 recently walked out alive from the US prison after unjustly serving 16 years.

The Cuban delegation that came to Kahnawake reminds us of the late great Merle Haggard singing his death song: “The warden let a prisoner down the hallway to his doom. So I stood up to say goodbye like all the rest. I heard him tell the warden just before he reached my cell, let my guitar playing friend do my request. Let him sing me back home with a song I used to hear. Make my old memories come alive. Take me away and turn back the years. Sing me back home before I die”. The corporatists pretend to run the world. We are not hoodwinked. We are all finding our way to the great peace.
Cuban 5.
Crimea for dummies