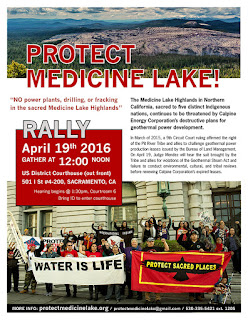 Come to a rally and court hearing on April 19, 2016 at the US District Courthouse at 501 I Street #4, 200, Sacramento, California.
People will gather at 12:00 noon in front of the Courthouse. The hearing begins at 1:30 pm in Courtroom 6. Please bring ID to enter the Courthouse.
The Medicine Lake Highlands continue to be threatened by Calpine Energy Corporation's destructive plans for geothermal power development, according to Morning Star Gali of the Pit River Tribe.
In March of 2015, a 9th Circuit Court ruling affirmed the right of the Pit River Tribe and allies to challenge geothermal power production leases issued by the Bureau of Land Management.
On April 19, Judge Mendez will hear the suit brought by the Tribe and allies for violations of the Geothermal Steam Act and failure to conduct environmental, cultural, and tribal reviews before renewing Calpine Corporation's expired leases.
For more information, go to:
protectmedicinelake.org
gmail.com
530-335-5421 ext. 1205
Email pitrivertribe.org for a printable PDF of the rally poster
at April 19, 2016 No comments: