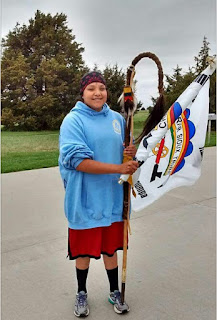 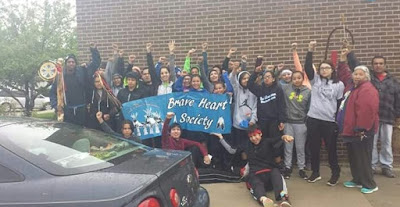 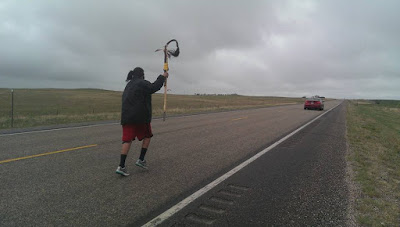 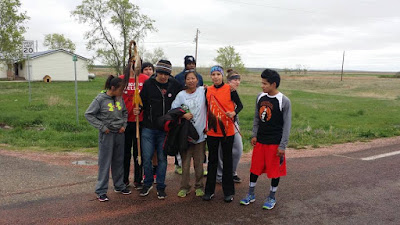 Run For Your Life: NO DAPL

A Relay Run In Opposition of Dakota Access Pipeline

By Run for Your Life
Censored News

Update: 'Run for Your Life' runners departed from Marty, South Dakota, after lunch, after a great meal and a warm sendoff! (Thursday, April 28, 2016)

OMAHA, Nebraska -- In solidarity with the ongoing fight against the Dakota Access pipeline, a group of Native and Non-native youth have organized a 500-mile spiritual relay run from Cannonball, ND to the district office of the United States Army Corps of Engineers (USACE) in Omaha, NE. The run is titled “Run For Your Life: No DAPL.” It departed the Cannonball community on April 24th, 2016 and plans to arrive in Omaha on May 3rd, 2016. The intention of the run is to deliver a unified statement to the USACE in resistance to the oil pipeline that proposed to cross beneath sacred water needed for life. The runners will will also turn over a petition calling for a full EIS to be conducted on the Bakken pipeline.

The running group is currently in Lake Andes, SD and plans for one day of rest, departing for Santee, NE on Thursday, April 28th.The participating runners are comprised of concerned citizens from across North Dakota, South Dakota, Nebraska and Iowa.

For the past several months, Native and non-Native peoples in the Midwest have been battling the construction of the Dakota Access/Bakken pipeline, a project that will go from North Dakota into South Dakota, Iowa and southern Illinois. If constructed, this large-scale pipeline will cross the 12,000 year-old Missouri River, one of the largest water resources in the United States that supports millions of people with drinking and irrigation water. The U.S. Army Corps of Engineers has stated that they will make the final decision on Dakota Access, LLC’s final permit needed to construct the Dakota Access/Bakken Pipeline no later than May 6th, 2016 .

Dakota Access Pipeline (DAPL), owned by Energy Transfer Partners, L.P., is proposed to transport 450,000 barrels per day of Bakken crude oil from the lands of  North Dakota to Patoka, Illinois. Dakota Access Pipeline is proposed to cross under the Missouri River twice, and poses as a threat to the sacred waters that the entire breadbasket of America depends on.  . The construction of Dakota Access will threaten everything from farming and drinking water to entire ecosystems, wildlife and food sources surrounding the Missouri.

QUOTES FROM INDIVIDUAL RUNNERS AND SUPPORTERS::

Bobbi Jean Three Legs, Standing Rock Member, Lead Run Coordinator states: “I am doing Run For Your Life: No DAPL because I want the younger generations to know what they are looking forward to in the future if this pipeline comes through. I am running for the whole Oceti Sakowin. I am carrying all their prayers on the road with us. Water is essential to everyday life. Why hasn't someone even given a thought about the 3 to 4million people who use our Missouri River water? It is 2016, and here we are fighting our battles, running across the state of South Dakota  to show our statement.”

Waniya Locke (Ahtna Dene, Dakota, Lakota, Anishinaabe) Standing Rock Descendent, Logistics Coordinator states: “We do not need oil to live, but we do need water, and water is a human right and not a privilege.”

Roni Starlin, Santee Nebraska  tribal citizen, Santee Segment Run Coordinator states:
“We as a tribe here in Santee, NE are running to oppose the DAPL to ensure our future generations are well and taken care of. We are borrowing this land from our grandchildren so we need to take care of our main life source: water. Without clean water we will cease to survive, thus exterminating our own existence.  We are running for our future generations.”

Melvin Young Bear (Eagle Butte CRST): “I am happy to be here and I am doing this for the generations way down the line. It’s them that we’re doing this for.

Chris Walton (Washington DC, Maryland): “I’m happy to be running and supporting my significant other Bobbi Jean. I'm running for everyone, we deserve clean water. We all deserve a future. Without water there is no future.”

Jasilyn Charger (Eagle Butte CRST): “I'm representing the two spirit oyate. I'm running for my brothers and my sisters across the world who stand in resistance. I run for every man, woman, and child that was, that is, and for those who will come to be. I run for my life, because I want to live.

Joseph White Eyes (eagle butte SD CRST): "I'm running against the Dakota Access pipeline not just to stop it, but to create strong unity within the Oceti Sakowin again."

Please post & distribute.
MNN. April 27, 2016. The “house of torture”, Indian Affairs, is a criminal organization. Back in 1969 the Liberal government of Canada decided to do away with Indian Affairs by removing their obligations, budget, protections and liability. Rather than freeing us and returning all our possessions, we going were to be pushed out onto the streets to die out, like the disastrous 1950s US Termination Policy. Our Indian Trust Fund is the club used to try to kill us off.

Nobody’s home at Indian Affairs.
Before the house goes down, a total forensic audit of Indian Affairs and its entire gangsta’ apparatus must be done. The “Don” of this “Mafia” is the “prime minister”. His henchmen are called “provinces”, “ministers”, “judges” and “armed forces”. They divide up our territories where the enforce their rules and collect “protection” money. “Blood” oaths are made to their “Queenie”. The corporate band and tribal councils strive to become full patch members to terrorize us.

Hey, why don’t we move into the “Tower of Power”?
A lot of lawyers and consultants are getting big career boosts and money out of fake inquiries into the criminal acts committed by Canada like the Truth and Reconciliation Commission TRC. They are designed to never solve any issues.

The corporate band and tribal councils strive to become full patch members so they can terrorize us. Once the Indian Act and Indian Affairs are dissolved, there will be a proper teio’hateh relationship. They will stay in their ship and not pull our canoe.

Does he mean Lovely Lorraine Laurendeau, the Deputy Minister of Indian Affairs?
Once the Indian Act and Indian Affairs are dissolved, and everything is returned, there will be a proper teio’hateh relationship between us and the occupiers. They will stay in their ship and not pull our canoe.

The ‘war room’ in the Tower of Terror in Ottawa must be shut down. The colonial settlers will right the wrongs by living up to all the human rights covenants Canada pretends to support internationally.
kaia’nere:kowa, our original instructions, will govern our land and everybody on it. Our mother will be taken care of. The heritage of our children not yet born will be restored. All of great turtle island will become beautiful again.
Guns & Roses sang about subjugators: “You just better start sniffin’ your own rank subjugation jack. Cause it’s just you against your tattered libido. The bank and the mortician. Forever man and it wouldn’t be luck if you could get out of life alive.” [Knocking on heaven’s door].

By Frontera NorteSur
Republished with permission at Censored News

A network of environmental and human rights activists from the Americas and Europe is appealing on Canada's new prime minister to promote legislative and administrative reforms aimed at Canadian mining companies operating across the globe.

In an April 25 letter to Canadian Prime Minister Justin Trudeau, more than 190 non-governmental organizations, including Mexico's Tlachinollan Human Rights Center of the Mountain, Bios Iguana, the Mexican Network of Persons Affected by Mining and other civil society groups, urged the Canadian leader to push reforms that will ensure mining firms from his country abide by international treaties, respect human rights standards and conform to transparent, good government practices in the public and private financing of mining investments.

The activists further called on Trudeau to not support influence peddling around regulatory policies in countries where mining takes place, uphold the right of self-determination of Indigenous communities, refrain from backing free trade agreements and international arbitration mechanisms that shield corporations from accountability, and allow international victims of human rights violations access to the Canadian justice system.

Besides environmental damages, some Canadian-owned mining projects have been linked to violence against environmentalists and community leaders, political corruption and organized crime throughout Mexico and Latin America, according to numerous press reports and a new report from European-headquartered researchers.

The lure of new gold mines has also created lucrative opportunities for thieves, such as the 2015 robbery of 7,000 ounces of gold from the Canadian-owned El Gallo mine in Sonora, Mexico.

Mohawk Nation News
Please post and distribute.
MNN. April 27. 2016. When bar lawyer Aaron Detler was physically removed from Six Nations by the men as per the kaia’nere:kowa, it signaled the beginning of the end of colonialism. The ball will roll from Six Nations to every onkwe’hon:weh community on ono’ware:keh. Nobody can stop it! Colonialism is a ‘corporate dictatorship’ backed by the military to privatize all land and resources for a select few.

Is this the local or the express?

Society must be based on families in the communities to deal with all issues, based on equality and everyone having a voice. All will live by the principles of the original instructions or leave great turtle island.
Our Indian Trust Funds – their weapon to club us to death – will be taken from the corporatists. Our tie to our mother will be nurtured. Our goal is a safe and healthy environment.
US, Canada and other colonial companies will be irrelevant. Corporations based on the exploitation of our resources will be dissolved. All ventures will adhere to the original instructions. Corporate artificial entities will no longer be tolerated. All businesses will be transparent.
The true terrorist called “Indian Affairs” has to go. All people shall be free when this is done.

Temporary selections of local officials, the economy, finance, banking, transportation, security, public safety and policies related to energy are answerable to the original instructions of our mother. As long as they carrying out her will to survive and coexist with all nature, they are welcome to remain.
Social justice and economic independence will be based on equitable distribution of all of our mother’s resources as per the original instructions. Science and technology has to benefit everyone. So must education, health, the environment, biodiversity, industry, quality of life and security. Financial sectors including banking and insurance, will conform to the original instructions.
We will conduct all relations with other countries. Colonial settlers like Trudeau and Obama will no longer pretend to represent the onkwe’hon:weh to the world at large.
No one can own our mother. We were placed here to carry out the original instructions on our beautiful istah.