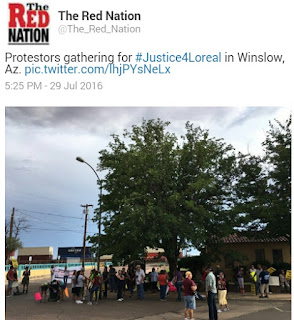 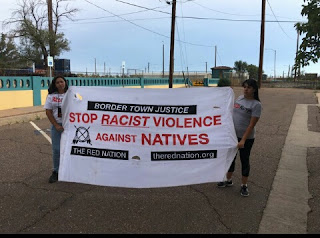 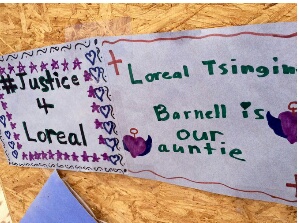 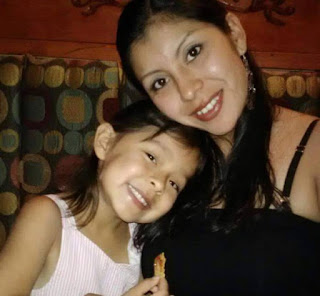 In Winslow, Arizona, there is a long history of racist whites murdering Navajos. Maricopa County has refused to prosecute a killer cop who murdered Dineh mom Loreal Tsingine.

Maricopa County Attorney Bill Montgomery’s decision is the most recent continuation of injustice that began on March 27 when Tsingine was killed by Winslow Officer Austin Shipley after shooting her five times at point-blank range. Winslow Police Chief Stephen Garnett and Lt. Ken Arrend, along with the City of Winslow, continue to fail all who seek justice for the family and community of Loreal Tsingine by allowing killer cop Austin Shipley to roam their streets.

Join us and make sure the Winslow Police Department and the City of Winslow, a bordertown settlement, are held accountable for their inhuman crimes towards Indigenous people and other people of color.

Starting at 5 PM (local Winslow time), we will march from Winslow City Hall towards Winslow Police Department., where we will pause and give the family of Loreal Tsingine, Winslow Community, and general public a chance to speak out and be heard.
Map to Winslow City Hall - https://goo.gl/maps/2z7Dr1ZtFgq

1. An independent review, which must include Navajo Nation government representation, of Loreal Tsingine’s murder. The independent review must not include another Arizona state­entity.
2. For the safety of the Winslow community and Indigenous people, the immediate termination and arrest of killer cop Austin Shipley, and the immediate termination of disgraced Winslow Police Chief Stephen Garnett and Lt. Ken Arrend.
3. AZ DPS’ full report as well as any and all evidence, including Shipley’s body­cam recordings, be made publicly available immediately.
4. An U.S. Department of Justice inquiry into the systemic and pervasive racial profiling and harassment of Arizona police against Indigenous peoples.
5. An official public apology from the City of Winslow to the family and community of Loreal Tsingine for her murder by Austin Shipley. The apology must be made
in Teesto, AZ, with State and National news media present.
6. The City of Winslow must compensate the Tsingine family for all expenses related to Loreal’s murder by Austin Shipley.
7. Any and all income paid to Austin Shipley by the City of Winslow during his administrative leave be immediately returned to the City of Winslow.
8. The Navajo Nation file a complaint to the U.N. Committee on the Elimination of Racial Discrimination (UN CERD) and U.N. Permanent Forum on the Rights of
Indigenous Peoples for rampant abuse, harassment, and treaty violations in U.S. policing of indigenous peoples
at July 29, 2016 No comments:

Today, the Hoopa Valley Tribe (HVT) filed its lawsuit against the federal government for violations of Endangered Species Act (ESA) regarding its management actions on the Klamath River, California's second largest river system.
"The harm caused by the Bureau of Reclamation's  and National Marine Fisheries Service's failure to protect the Coho is driving this federally protected fish and our Tribe to extinction," said Chairman Ryan Jackson. "These fish have been essential to our culture, religion and economy since time immemorial," added Jackson.
Federal irrigation project and private dam operators on the Klamath River divert and store water, leaving less for fish. The water that remains is warmer than tolerable for salmon and polluted with nutrients and chemicals. Under those conditions, fish are vulnerable to diseases they ordinarily could survive. In 2002, thousands of migrating adult salmon died under those same conditions. Moreover, literally hundreds of thousands of juvenile salmon have been infected with disease pathogens that have severely reduced the survival Klamath River Coho salmon.
To help prevent another die off, federal agencies set ESA standards for Klamath fish health and Klamath Project operations were bound to meet standards in the 2013 Biological Opinion issued by NMFS.  Multi-year drought and project operation changes have contributed to juvenile fish infection rates in 2014 and again in 2015 that have soared past the limits established in the Biological Opinion. "Instead of reacting to the impacts on fish health caused by unforeseen circumstances, the federal agencies have proposed to lower the standards for fishery protection (e.g. increase numbers of fish that can be killed) so that damaging irrigation diversions and dam operations can continue," said Hoopa Fisheries Director Michael Orcutt.
"The effect of these actions stands the law on its head," said tribal attorney Thomas Schlosser.  "The Hoopa Valley Tribe's fishery, not irrigation and dam operations, has priority for Klamath River water under both federal Indian law and reclamation law," said Schlosser.
In its suit, the Tribe is charging that the failure by federal agencies to re-consult on the 2013 Biological Opinion in light of new information is a direct violation of the ESA.  "It is unfortunate that it will take this lawsuit to gain the attention of the federal agencies", summarized Jackson.  "However, this action is unavoidable if we are to protect our fishery resources for future generations".
"This ESA suit is not the warning of a miner's canary; it is the tsunami siren alerting North Coast communities of impending environmental catastrophe and cultural devastation for the Hoopa Valley Tribe,"  concluded Jackson.

The comment period deadline for the “Invitation for Public Comment to Inform the Design of a Consent-Based Siting Process for Nuclear Waste Storage and Disposal Facilities” is July 31, 2016.

Email: Responses may be provided by email to consentbasedsiting@hq.doe.gov. Please include “Response to IPC” in the subject line.

Please post and distribute.
MNN. July 28, 2016. Elections, stock exchange, casinos and game shows all use the same corporate rules for their operation. They take advantage of people’s lust for money and craving for 15 minutes of fame. It lures people out of their boring lives. People make fun of those making fools of themselves.

Believe the lies and reject the truth!
Both the Republican and Democratic national conventions illustrated the conditioned mindset of Americans who have been nurtured on game shows since the 1930s. The American phenomenon is to win prizes and get money without working, while putting on a made-for-tv spectacle.
In Canada white people can become incorporated INDIANS.

US election game show!
The candidates and the audience are all in on the game. They scream, holler, cry, smile or boo on cue. They run and jump in their seats as if they had just won money or a prize. They vote for the one who promises them the most money.
The convention feels like a casino. Lights flashing. Music blaring. Audience in silly hats rattling noise makers. Oxygen is probably being pumped into the audience. The speakers yell at them to vote for them. All politicians orchestrate these shows. “Everything will be better for you”, without offering them anything. Everybody knows that only one contestant is going to win. They are alright with it. They are there as set decorations.
Bob Barker of “The Price is Right” promises, “We are going to win a lot of money today” suggesting one of you might win some money, but the rest will get nothing.

The “house always wins”. Elections and game shows are big businesses. They have to turn a profit to stay in the game. The end goal is to take people’s votes, money and minds.
Elections are based on 51% majority rules the same as corporations. The game show winner gets the prizes and the rest get nothing.
As Blood Sweat and Tears says: “What goes up must come down. spinning wheels got to go round”.

ALERT: PayPal has taken all of MNN’s funds [$165] without explanation. They are asking for payment to close down account. MNN Mohawk Nation News kahentinetha2@yahoo.com for more news, to donate and sign up for MNN newsletters, go to mohawknationnews.com More stories at MNN Archives. thahoketoteh@ntk.com Address: Box 991, Kahnawake [Quebec, Canada] J0L 1B0 or original Mohawk music visit https://soundcloud.com/thahoketoteh
Trump on INDIAN casinos.
These are the 10 most popular game shows in tv history.
http://opl.apa.org/Experiments/About/AboutMontyHall.aspx