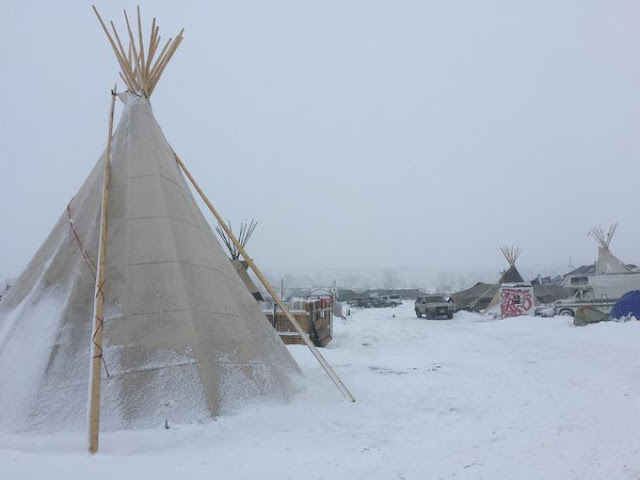 Lakota, Dakota and Nakota at Standing Rock Camp call for mass civil disobedience where you are, and welcome people who are mobile and self-sufficient to the camp

We are putting a call out immediately for allies and people to stand up where they are, mass civil disobedience as a showing of solidarity for Standing Rock, the fire exists within them and now is the time to let them reignite. The heart of standing rock beats everywhere, the fire has been taken by 10,000 potential organizers nationwide and we need you to hit the ground immediately. Demand people Divest from big banks and help us Defund DAPL! We are the revolution and the resistance continues."
-Oceti Sakowin Camp Leadership
Received just now from Dakota, Nakota and Lakota in camp: So they ask that people take the cry of Mni Wiconi to their backyards, to resist and be creative in their resistance using NVDA (non violence civil disobedience.) We trained thousands.
Shield the people, the KXL camp in Rosebud, is planning to re-open. So is Pte Ospaye, the frontlines camp against KXL in Bridger.The call has been put out to return to Cannonball River. However, people must understand we are in transition at the camps.If they come, they should first come knowing -- absolutely no alcohol or drugs, including no drinking at the casino.No weapons.This is indigenous led, and ALL actions and daily life will be led through prayer, and be indigenous led.Prayer first and foremost in all things.They should be self sufficient. Be able to take care of yourself or bring helpers to help you do that, these are harsh living conditions.We will live by the Lakota values, under traditional law, which can seem archaic and harsh to some, but it must be done. Living as a Lakota, Dakota  Nakota and going back to traditional ways is important.We are moving on to higher ground.Some people undoubtedly will remain in the flood zone, we hope they reconsider but cannot force people to move.The Cheyenne River Sioux Tribe has leased land for a winter camp.
The grassroots group has been given use of private land to use for a winter camp.
Sacred Stone is open.All of these camps stand in unity with regards to no tolerance for alcohol or drugs, non violence, prayer first and foremost, and no weapons.Traditionally camps moved, especially during winter. Do not think in terms of permanent camping.Anyone caught agitating or creating situations that are harmful to the movement, the people or the camps, will be asked to leave.
at January 26, 2017

Thank you! Needed to know.

I must have misunderstood I thought it was in prayer that this would be won not mass disobedience. Wow I'm not proud of that stand at all. I won't be supporting that stand

"to resist and be creative in their resistance using NVDA (non violence civil disobedience.) We trained thousands." This translates to resist in prayer, in song in peaceful protest, in holding mirrors rather than tossing curses or snowballs. This translates to exactly what you are missing the translation of and what you apparently do actually support <3

https://www.facebook.com/groups/AllCampMigration/
****URGENT PLEASE GET THIS AROUND*** WE NEED ALL HANDS ON DECK RIGHT NOW! We currently have two camps asking for help moving as well as need in dispersing todays wood load and reloading trucks with redistribution items going to Rosebud, (Rapid City) SD.
If you are in camp please UNIFY in the work , if you NEED HELP PLEASE LET US KNOW SO WE CAN GET YOU HELP!! Rosebud and a few other have taken the charge in camp trying to coordinate a more efficient move to be pro active TODAY to make sure no-one gets left behind and ends up in the garbage sweep. So here's the pep talk and rally Lets do This! 200+ in the group we badly need way more than that to join. Pass this link around!!

Thank You! I shared but cannot copy any of the text to quote! I have found that quoting a small part of the text helps people get motivated to click the link and read. Why can't I copy? Thanks! #NODAPL #SDP #WATERISLIFE

Hi Margaret, If you email me, I will send text block with link to share. Copy and paste is turned off because of the profiteers who are stealing our unpaid work, copyrighted news, for advertising and clicbait revenues and refuse to stop. This includes Free Thought Project and Counter Current News on Facebook. Contact me at brendanorrell@gmail.com

“Protest beyond the law is not a departure from democracy; it is absolutely essential to it.”
― Howard Zinn