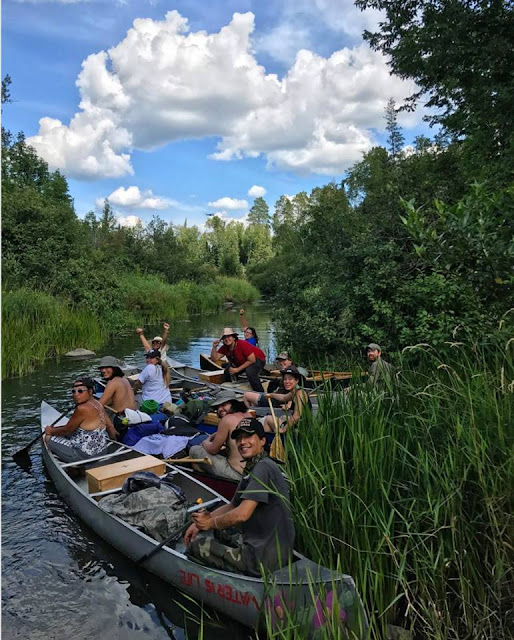 Paddle to Protect: A 250 Mile Canoe Journey to #StopLine3 "kicked off at the headwaters of the Mississippi. We're so thankful to everyone that came to share time in the water, offer their support, prayers, and good medicine with us before the journey began. The net that we cast when we first reached out for support reached so many people and we want to say chi miigwech to everyone helping us sound the alarm. Catch us on the water between now and our final arrival date on September 2nd in Big Sandy Lake! We hope to see you on the river." -- Paddle to Protect

Video below Aug. 14, 2017: Enbridge began work in Minnesota without permits.

While the British Columbia provincial government yesterday was prohibiting Kinder Morgan from starting work on its Trans Mountain Expansion pipeline and tanker project on public land until First Nations rights are respected, Alberta Premier Rachel Notley was on site celebrating the start of construction of Enbridge’s “Line 3” project, a tar sands pipeline also mired in Indigenous opposition – including from the 150 First Nations and Tribes who have signed the Treaty Alliance Against Tar Sands Expansion. That opposition to Line 3 is growing all along its route but its epicenter remains in Minnesota where Tribes and water protectors are promising to stand in its path, like the group of young water protectors who will be embarking starting Saturday August 12 on a 3 – week, 250- mile canoe journey across northern Minnesota called the “Paddle to Protect” – to stand for the lakes, the manoomin (wild rice) beds and the 1855 treaty territories of the Ojibwe people.“There’s not going to be a Kinder Morgan tar sands pipeline out West jeopardizing our coasts, there’s not going to be a TransCanada contaminating the Ogallala aquifer, nor is there going to be an Enbridge one poisoning the lakes and wild rice beds in Minnesota,” said Grand Chief Stewart Phillip, President of the Union of BC Indian Chiefs, on behalf of the Treaty Alliance Against Tar Sands Expansion. “We commend the new BC government for standing up for BC, especially for appointing Thomas Berger as their external counsel, and for wanting to be on the right side of history regarding these climate – killing tar sands pipelines.”“Our people were at Standing Rock and all the ingredients for another Standing Rock -style stand in defence of our water are there. And the youth are leading the way again, including raising awareness about the dangers of Line 3 with the ‘Paddle to Protect’, a3-week 250-mile canoe journey across northern Minnesota” said Winona Laduke, Executive Director of Honor the Earth, an Indigenous Environmental organization based on the White Earth reservation in Minnesota. “We don’t need this pipeline, we don’t want this pipeline and we’re going to stop it.”Enbridge’s Line 3 and Kinder Morgan’s Trans Mountain Expansion were both approved by the Trudeau government on the same day on November 29 despite the strong opposition of First Nations across the country. Construction on Line 3 has begun in Canada despite the fact that many Treaty Alliance member First Nations along the route have not given their consent and firmly oppose the work. Meanwhile, the regulatory process is not even finished yet in Minnesota.“Anyone out there celebrating the start of construction better realize that the opposition to this Line 3 tar sands pipeline is only getting bigger. Do you think our Indigenous people and our allies all over North America are going to let Tribal peoples in Minnesota fight this alone –do you think our young people will let that happen?” Added Kevin Hart, Assembly of First Nations Regional Chief for Manitoba on behalf of the Treaty Alliance Against Tar Sands Expansion. “Enbridge, the company behind the Line 3 pipeline,is hated in Indian country: our people will never forget that Enbridge tried unsuccessfully to ram through the Northern Gateway pipeline in BC, that they ran roughshod over the rights of the Chippewas of the Thames with their Line 9 pipeline and that they are one quarter owners of the criminal Dakota Access pipeline.”Enbridge is replacing its old Line 3 pipeline that has a current effective capacity of 390,000 bpd with a new expanded pipeline with the capacity to transport 915,000 barrels of tar sands oil a day–a difference of 525,000 barrels (the same amount of tar sands oil that would have been transported by the now defunct Northern Gateway pipeline). The 150 First Nations and Tribes who have signed the Treaty Alliance Against Tar Sands Expansion have committed to standing together to collectively stop Line 3, the Trans Mountain Expansion, Keystone XL and Energy East.For more information, please contact:Grand Chief Stewart Phillip, President of the Union of BC Indian ChiefsCell: 250-490-5314Winona Laduke, Executive Director,Honor the EarthCell: (218) 280-1720winonaladuke1@gmail.comKevin Hart, AFN Regional Chief for ManitobaCell: 613-290-6283KHart@afn.ca
at August 16, 2017 1 comment:

Mohawk Nation News
Please post and distribute.
MNN. Aug. 15, 2017. Living in cities did not work for us. Society became large unmanageable and exhausted our resources. City dwellers sent others out to get the resources they needed, which dwindled. Classes, selfishness, greed, crime, corruption and chaos crept in.

IT ALREADY HAS!
People became less willing to share, causing divisions. Crime festered inside the cities.
Smaller groups of onkwe-hon-weh left and returned to the land. They used smaller parcels of land and did not have to travel far from their homes to feed and take care of their families.  Every one was equal. People could live in peace and harmony once again.

When the invaders arrived on great turtle island, they found remnants of abandoned great cities. The descendants told them it didn’t work out and people went back to their smaller sustainable communities.
Today in North American cities classes of haves and have-nots have created desperation and chaos. Police forces and prisons are big private businesses. Crime, drug dealers, sex parties, human trafficking, pedophilia and perversions from the European mentality are being glorified.
Crime is a big private business for politicians, lawyers, judges, courts, governments to cage people mostly for stupid reasons. The rich get richer and make the rules.

The young and old want a piece of the American pie. A few profit. The majority live in constant fear and poverty.
The rulers spout that everyone has become evil and demand more policing, standing armies and punishment to control or foment wars between races, gangs and desperate people. Those who disagree are targeted.

Natural guidance to protect ourselves has been almost erased. We walk around like strangers in filthy and dangerous cities and towns on our own land. A veil of concrete has been put over our mother’s face so we can’t recognize her.
It’s one thing to survive but another to live in the natural way. Soon we might exploit our mother too.

HEY, WHERE’S THE ‘INDIAN’ SECTION?
We condemn logging, oil drilling, fracking, pipelines, logging, dams, pollution. In the next breath we want to be like them. The corpo band and tribal councils and their cohorts want profit from our resources and to sit in offices trying to scare and control us. They strive to be like their wrongdoing handlers. The almighty dollar is their salvation.

GREAT PEACE TOWER IN OTTAWA.
Awareness is the first step. The young are angry. They know they’ve been lied to and cheated. The very essence of who they are has been stolen from them. Those seniors who are near the end should not prevent them from doing what is necessary. It is their time with a whole life ahead of them.
Whoever thought ‘motor city’ Detroit, one of the greatest US cities, would lose its glory. Eminem sings about losing yourself. [Eminem ‘lose yourself’ with lyrics]