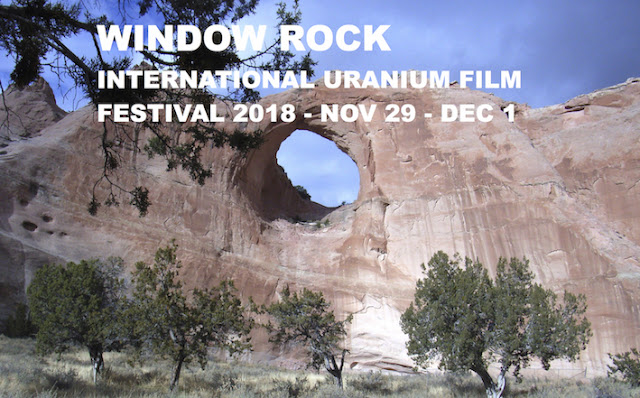 Window Rock / Rio de Janeiro - Since 2011 the International Uranium Film Festival travels around the world showing documentaries and movies about the risks of nuclear power and uranium. November 2013 the in the world unique film festival was hosted for the first time by the Navajo Nation / Dine Nation. Now in 2018 the Uranium Film Festival will return to Window Rock and screen new "atomic“ documentaries and movies from all over the world in the Navajo Nation Museum.The festival is scheduled for November 29th to December 1st and it will remember the legendary Indigenous World Uranium Summit (IWUS) that happened exactly 12 years before at the same location. In addition to the film screenings discussions and round tables about the question of uranium mining and nuclear power are planned.The Uranium Film Festival encourages especially native american and women filmmakers to send their films about uranium mining or any nuclear issue to the festival. The selected films will be shown not only in the Navajo Nation Museum but also in venues in Flagstaff, Albuquerque and Santa Fe. The best productions will receive the Uranium Film Festival´s award in Window Rock.The festival will not only be in the Navajo Nation Museum but also in venues in Flagstaff, Albuquerque and Santa Fe in the following week.However the exact number of films screened and the number of screening days still depend on the support we can get. "It is a great honour for us to have the opportunity to return to Window Rock," says Uranium Film Festival’s director Norbert G. Suchanek. "The question of nuclear power is not only an issue of the navajo nation who suffered for decades because of uranium mining. All people should be informed about the risks of uranium, nuclear weapons and the whole nuclear fuel chain.“Partners and supporters of the International Uranium Film Festival in Window Rock and the US Southwest are the New Mexico Social Justice and Equity Institute, the SW Indigenous Uranium Forum, the Seventh Generation Fund for Indigenous Peoples, the Guild Cinema in ABQ and the Center for Contemporary Arts Cinematheque in Santa Fe.http://uraniumfilmfestival.org/en/window-rock-the-return-of-the-uranium-film-festivalWe welcome any support.Further information ContactNorbert G. Suchanek, General Director International Uranium Film Festivalinfo@uraniumfilmfestival.org(link sends e-mail)www.uraniumfilmfestival.org Anna Marie Rondon, Executive Director New Mexico Social Justice and Equity Institute505-906-2671 (c)nmsjei@gmail.com _____________________ Thanks for your attention. NorbertInternational Uranium Film Festival Rua Monte Alegre, 356 / 301Santa TeresaRio de Janeiro / RJCEP 20240-194Brasil www.uraniumfilmfestival.orginfo@uraniumfilmfestival.org0055 - 21 - 2507 67040055 - 21 - 97207 6704 www.facebook.com/uraniumfilmfestwww.facebook.com/uranioemmovimentowww.facebook.com/aboutnukeshttps://twitter.com/URANIUMFESTIVAL
at March 07, 2018 No comments: