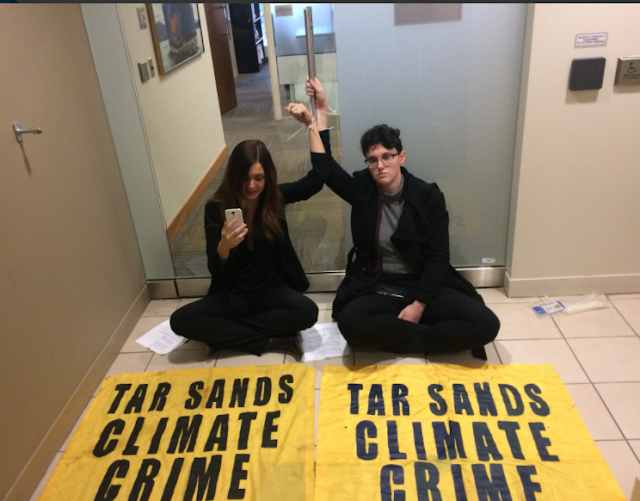 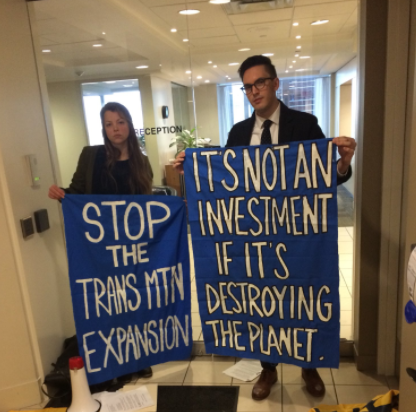 For the fifth time in 5 days, land and water protectors head out to take bold action against Kinder Morgan, including two federal Members of Parliament, a former federal Liberal candidate, and an actor.
French translation by Christine Prat at:
http://www.chrisp.lautre.net/wpblog/?p=4488 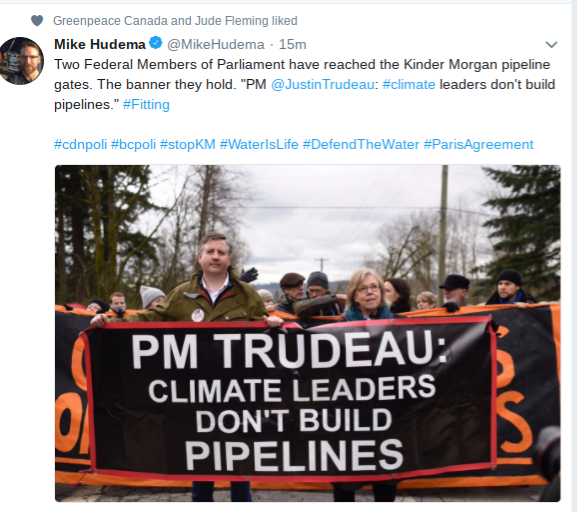 Autumn Peltier, 13, Speaks out for Water at U.N., Sends Message to Trudeau on Pipelines

Addressing the United Nations General Assembly, Indigenous Youth Autumn Peltier has message for Prime Minister Trudeau on pipelinesTreaty Alliance Against Tar Sands Expansion
Mar 22, 2018, 09:48 ETWINNIPEG, March 22, 2018 /CNW/ - Autumn Peltier, a 13-year old water advocate from the Wikwemikong First Nation in northern Ontario, is addressing world leaders today at the United Nations General Assembly in New York City on World Water Day. Autumn is part of the official launch of the United Nations International Decade for Action on Water for Sustainable Development project but she also has a special message for Canada's Prime Minister Justin Trudeau."Prime Minister Trudeau personally told me he would protect our water just like he promised everyone that he would be a climate leader – instead, he continues to push for three oil sands pipelines: Kinder Morgan, Line 3 and Keystone XL," said Autumn Peltier. "As politicians fail us, so many people are standing up to support the right of Indigenous Peoples to say NO to these pipelines, like the 150 Nations all along the pipeline routes who have signed the Treaty Alliance Against Tar Sands Expansion."Autumn Peltier has travelled the world as a celebrated ambassador for 'Nibi' (water) and was the only child from Canada to be nominated for the 2017 International Children's Peace Prize. On March 10, Autumn Peltier led a delegation of Treaty Alliance Chiefs from across Canada to BC to support, along with thousands of Coast Protectors, the "Kwekwecnewtxw - Protect the Inlet" project by Coast Salish water protectors who built a traditional Watch House in the path of the Kinder Morgan pipeline. The Treaty Alliance Against Tar Sands Expansion, launched on September 22, 2016, opposes the expansion of the Alberta Tar Sands, including the proposed Teck "Frontier" mine (which would be the largest ever open-pit tar sands mine), and bars the passage of proposed tar sands pipeline and rail projects, including their associated tanker traffic, which projects threaten our water and coasts and would fuel catastrophic climate change. The 150 First Nations and US Tribes who have signed the Indigenous treaty have committed to work collectively to enforce the ban, including against Kinder Morgan's Trans Mountain Expansion, TransCanada's Keystone XL and Enbridge's Line 3.Full release: http://www.treatyalliance.org/wp-content/uploads/2018/03/Treaty-Alliance-PR-March-22.pdfSOURCE Treaty Alliance Against Tar Sands ExpansionFor further information: Media inquiries: info@treatyalliance.org, Manitoba AFN Regional Chief Kevin Hart, Cell: 613-290-6283
at March 23, 2018 No comments:


Censored NewsThe Salt Lake Tribune reports that an "obscure company called Ayers Energy bought a bunch of controversial public-lands leases in Utah’s San Juan County — but who’s actually behind it?"
The Monticello area received some of the highest bids, with Context Energy LLC bidding $145,600 for a 1,600-acre parcel, according to the BLM. Other bidders included Ayers Energy LLC, Wasatch Energy LLC and Kirkwood Oil and Gas Inc, according to the data.Read more:https://www.sltrib.com/news/environment/2018/03/22/obscure-company-called-ayers-energy-bought-a-bunch-of-controversial-public-lands-leases-in-utahs-san-juan-county-but-who-are-they/
at March 23, 2018 No comments: