Update six and one-half years later. The original article below was posted on Nov. 18, 2012.
Censored News came under attack by trolls who wanted to discredit the facts this weekend in June of 2019, so we have reposted it, with our current Facebook comment added:
"Aleut Concentration Camps -- It took a long time to find this link, which Google buried, of Aleut  concentration camps during World War II in Alaska. Aleuts were placed in these camps and left to starve and die of diseases without medicine. We posted this article after PBS covered this atrocity. Entire families suffered and many died. Today, migrant children, alone, frightened, sick and abused are being placed in these concentration camps. The U.S. has a history of this torture, genocide and violation of international human rights. Most Americans are too busy shopping at WalMart and distracting themselves." -- Brenda Norrell 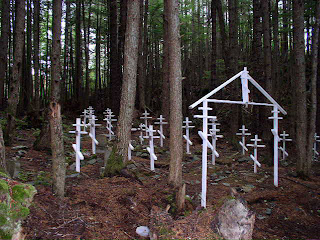 The horrible and untold story of Aleuts who were forcibly taken from their homes in Alaska and placed in US internment camps during World War II, is told in the Aleut Story.

The film, showing this week on public television, reveals the ever-present death in these camps, where disease was rampant, from boils, to tuberculosis. Aleut were placed in damp and rotting buildings for years, with little food or medicine.

Aleut survivor Mary Bourdukofsky, interned at Funter Bay Duration Camp said, "We really didn’t know where they were going to take us."

Aleut waited for weeks, then months, then years to return to their home islands. The survivors spent decades seeking justice.

The Aleut Story reveals the inherent racism of the US government. During this time, the Aleut men were forced into slave labor as seal hunters, with the US threat of never being able to return to their homes if they did not. 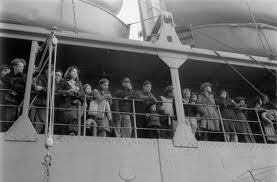 When Aleut return to the camps later as adults, they visit the graves of those who died there.

Aleut Story
From isolated internment camps in Southeast Alaska to Congress and the White House, this is the incredible, untold story of Aleut Americans’ decades-long struggle for human and civil rights.
In 1942, as World War II invaded Alaska, Aleut Americans were taken from their homes and removed to abysmal government camps 1,500 miles away. Death was ever-present in the camps. An estimated 10 percent of the men, women and children sent to the camps would die there—a death rate comparable to that suffered by Americans in foreign prisoner of war camps. As the Aleuts prayed for deliverance, "friendly forces" looted their homes and churches in the Aleutian and Pribilof islands.
Those who survived would fight for their rights—in the nation’s courts and on Capitol Hill. In a historic action—one that continues to influence our lives and our nation’s ideals—Aleuts joined Japanese Americans in seeking wartime reparations from the federal government.
Aleut Americans ultimately prevailed.
Richly textured with all the elements of great human drama—war, suffering, sacrifice, faith, self-discovery and renewal—Aleut Story is a poignant and timely film about the least known chapters of the American civil rights experience.
Filmed on location in Alaska and Washington, DC on 35mm and S16mm, Aleut Story moves viewers through a distant landscape with mesmerizing cinematography, presents rare archival images and contemporary interviews. Narrated by Emmy® winner Martin Sheen, historical readings by John O’Hurley, vocals and flute by Grammy® winner Mary Youngblood.

Aleut Story was developed, researched, filmed and edited for national television over five years. Thousands of pages of historical documents, public testimony, congressional debate, personal memoirs, photographs and scholarly texts were reviewed. Filmed entirely on location, the project took the film crew to the Aleutian Islands, the Pribilof Islands, the historic sites of federal duration camps at Funter Bay and Killisnoo, to Anchorage, Juneau, Seattle and Washington, D.C. But the real strength of this film is the chorus of first person voices.

To order this film:
https://www.visionmakermedia.org/films/aleut-story
at June 23, 2019 No comments: