GENEVA -- The United Nations Human Rights Council in Geneva will hear of the excessive force by police at Standing Rock during September, as it also delves into the crimes of mercenaries, private military and private security agents hired by extractive industries.
These agents of deaths are killing Indigenous Peoples around the world that are protecting their land, air and water. The United States is also listed in human rights violations for its inhumane migrant detention centers operated by private security.
The Human Rights Council, in its 42nd session, Sept. 9 -- 27, will hear the report of its Working Group on the relationship between extractive industries and private military and private security from a human rights perspective. The report also documents the use of mercenaries to impede self-determination.
The excessive use of force on Water Protectors at Standing Rock, and the use of infiltrators to "sow discord and monitor protesters," is cited in these global atrocities. The use of dogs used against protesters at Standing Rock is among those atrocities. 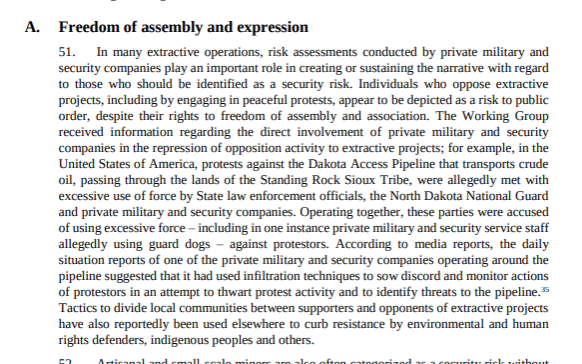 The news reports referred to in the report, describe the private security firms at Standing Rock. According to a Morton County report, the private security firm TigerSwan took the lead in advising a joint task force of police and military at Standing Rock.
Dakota Access Pipeline hired a large number of private security firms, including Silverton. Among the infiltrators in camp was Landon Steele, working for private security. Steele's small white dog was a bomb detection dog.
Reporter Will Parrish at The Intercept exposed the FBI paid informant Heath Harmon of Three Affiliated Tribes, responsible for the arrest and imprisonment of Red Fawn.
In its report, the Working Group points out to the U.N. Human Rights Council the rights of Indigenous Peoples:

Migrant detention centers in the United States and Australia are among the worst global human rights atrocities:

Private security is deadly for environmentalists, the Working Group reports.

During May of 2019, in Jamaica, four Native women delivered powerful, extremely focused testimony before the Inter-American Commission on Human Rights. Ponca Councilwoman Casey Camp-Horinek was one of them. Casey's riveting testimony on the arrests of elders in ceremony at Standing Rock, and imprisonment in dog cages by Morton County, startled those in the hearing room.
Casey's testimony was followed by the lackluster, difficult to comprehend, rambling response of U.S. State Dept. officials, who could provide no intelligent excuse for the excessive force or the widespread violations of human rights and civil rights at Standing Rock.
In case you missed our coverage from Jamaica, we share it again, with links to the testimony of Michelle Cook, Dine' and organizer of the delegation, describing the criminalization of Water Protectors; Leoyla Cowboy, Dine', honoring her husband Little Feather Giron and the other NO DAPL political prisoners; and Ofelia Rivas, Tohono O'odham testifying on the militarization and abuse of O'odham at the border. After testifying, Ofelia was slapped with an SSSS status on her boarding pass, and searched constantly, resulting in two days of delays in transit.
https://bsnorrell.blogspot.com/2019/05/brutalized-at-standing-rock-and.html

Zapatistas: Images from the Breaking of the Siege II 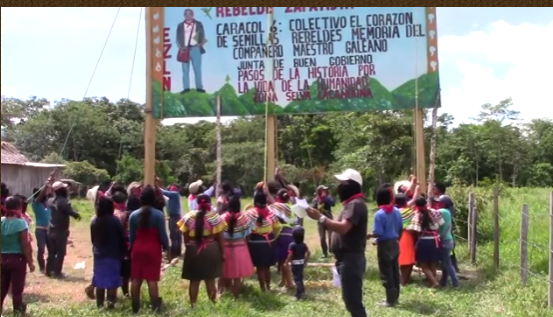 Images from the Breaking of the Siege II (and last)From August 17, 2019