ALI JEGK, Tohono O'odham Nation -- The destruction of sacred land is underway here in Ali Jegk (Little Clearing) community on the Tohono Oodham Nation, as the land and plants are being destroyed for the integrated fixed towers, spy towers, that were authorized by the U.S. Homeland Security and Tohono O'odham Nation elected government.

Ofelia Rivas, Tohono O'odham said today, "The destruction of our mountain is yet another deliberate attempt to dismantle the hundreds of thousands of cultural connections to our lands. Indigenous peoples throughout the world have survived as the O'odham have."

"The mountains scape and landscape is forever altered to continue to try and erase who we are as a people. They have cut down trees and plants to show their destructive cultureless society. The powerful mountain is bearing this painful wound for the unnecessary erratic whims of deranged spoiled elitists that so-called americans have set loose upon Turtle Island. We, the people of understanding, people of wisdom, people of conscious request your support and prayer offerings," Rivas said.

"Ve'jup'an our little brother will survive."

"The mountain holds human remains of our people and also places of our cultural practices (medicine bundles) home and home of the ceremonial deer and bighorn sheep and mountain tortoises that are protected under the Endangered Species Act," Gu Vo District said in its resolution opposing the spy towers.

The Gu-Vo District opposed this destruction of their ceremonial place and burial places from the beginning.

Gu-Vo, in the westernmost district of the Tohono O'odham Nation, told the U.S., "The Gu-Vo District opposes these proposed tower sites to protect cultural sites on the holy mountain now called the Ajo Mountain Range. The mountain holds human remains of our people and also places of our cultural practices (medicine bundles) home and home of the ceremonial deer and bighorn sheep and mountain tortoises that are protected under the Endangered Species Act."

"The Gu-Vo District communities landscape have already been greatly impacted by numerous unauthorized roads and destruction of our mountains and hills of great significance to the O'odham way of life. Our future generations will face more restrictions to live on our original lands as our rights as original Indigenous peoples continue to deteriorate." 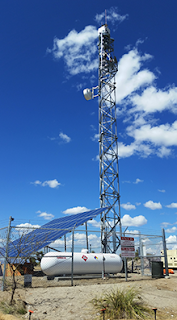 The Trump administration has waived all environmental laws, and laws protecting sacred places. The waivers cast aside these laws: