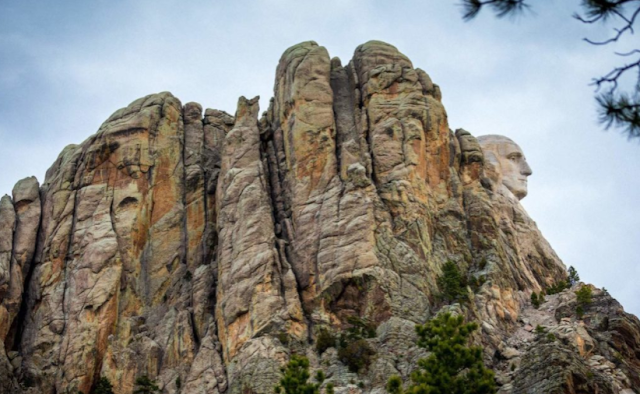 TRUMP’S PLANNED TRIP TO MOUNT RUSHMORE PUTS LIVES AND A FRAGILE ECOSYSTEM AT RISK
The July 4th event will only serve to endanger the Black Hills National Forest, spread contagion, and continue the president’s pattern of sowing hatred and division.

This piece is a commentary, part of The Appeal’s collection of opinion and analysis.

By Ruth Hopkins, Lakota/Dakota, Sisseton Wahpeton
The Appeal
On Friday, President Trump plans to attend a fireworks display at Mount Rushmore, located in the majestic Black Hills of South Dakota.
He was invited there by the state legislature, although Governor Kristi Noem, a vociferous Trump devotee, almost certainly played a role in organizing the much-hyped event. Before the legislature passed the resolution to welcome him, Trump said Noem had asked him to lift environmental restrictions meant to protect the Black Hills from the potential devastation an exorbitant pyrotechnics show could cause.

During an interview, the president said he could not believe environmental harm could be caused by fireworks because “it’s all stone.” In his typical fashion, characterized by an irrational, pernicious level of arrogance commingled with obliviousness and indifference, Trump fails to grasp or care that Mount Rushmore is in the middle of the Black Hills National Forest.

The last fireworks display at the monument was in 2009. The Trump administration’s Department of the Interior claims that an environmental assessment they performed concluded that such a show held this year would have “no significant impact.” Here’s hoping they’re right, lest Trump’s slash-and-burn politics manifest literally.

Even if a midsummer fireworks display in the middle of a national forest doesn’t spiral out of control and cause irreparable damage to a fragile, beloved ecosystem, the event’s organizers are holding this gathering in the midst of a pandemic unlike any humanity has experienced in over a century, in close proximity to Native communities who have been vocal about being vulnerable to the novel coronavirus that causes COVID-19.

Read the full article at The Appeal:

Ruth Hopkins is a Dakota/Lakota Sioux writer and enrolled member of the Sisseton Wahpeton Sioux Tribe. She is also a biologist, tribal attorney, former judge, and co-founder of Lastrealindians.com. Hopkins resides on the Lake Traverse Reservation in South Dakota.
Posted by Censored News, publisher Brenda Norrell at June 30, 2020