GALLUP, New Mexico -- The volunteers at McKinley Mutual Aid are an inspiration, delivering care packages this week with fresh homemade banana bread. The weekly care packages are reaching those most devastated by the coronavirus here, the elderly.

Christopher Hudson said, "We got a call last week from McKinley Mutual Aid that they had some bananas that might be of use to some awesome baker out there. They must of know my mom makes the best banana bread and had been ready to help her community. After a couple of hot nights, she was able to turn some of those bananas into her amazing bread. This week those tasty breads will be an added treat going out in some care packages to our community in need. She says, "They are ABC delicious and yummy for your tummy, enjoy."


McKinley Mutual Aid said it is able to increase its efforts this week, thanks to the Community Organized Relief Effort.

"We are very excited to be supported by CORE! They have helped McKinley Mutual Aid scale up the last several weeks by renting vans for delivery, strengthening our supply chain, and procuring equipment to speed up our packaging process. Starting next week they will be producing hygiene kits to add to all 500 food boxes! Thank you so much for your support!" McKinley Mutual Aid said.
Donate at https://ourindigenouslifeways.org/

The inspiring work of volunteers at McKinley Mutual Aid continues this week as McKinley County is experiencing the highest rate of elderly deaths from the coronavirus in State of New Mexico.

New Mexico reports there were ten deaths in the past two days in McKinley County. There were five deaths on Thursday and another five deaths on Wednesday. All were ages 60 to 90, except for one person who was forty-years-old. McKinley County includes Gallup, portions of the eastern Navajo Nation and Zuni Pueblo.

To the north of here, there were two deaths in San Juan County yesterday, ages 50 and 80-years-old. Three more deaths were reported on Wednesday, of elderly, 60 to 80 years old. One of these was a female resident at Life Care Center in Farmington, which has one of the highest rates of deaths from coronavirus in the State of New Mexico.

An investigation by Target 7 news found that the federal government had put seven nursing homes in the state on notice in recent years because they have not been following procedures to prevent the spread of disease.

The investigation showed the lack of care and unsanitary conditions contributing to the spread of disease. During the coronavirus spread, one of these nursing homes had healthy people using the same bathroom as those with the virus, the news channel reported.

Elsewhere in New Mexico, Otero County Prison Facility accounted for just more than half of those cases, with 66 new cases on Thursday.

Meanwhile, on the Navajo Nation in Arizona, New Mexico, and Utah, there were 69 new cases, and five more deaths reported on Thursday. The total number of deaths reached 264 as of Thursday. The number of cases reached 5,730.

The Navajo Nation received $600 million in federal CARES Act funding on May 6. However, the tribal government has not yet allocated the funds to meet the needs of those affected by the virus.

Volunteer relief organizations like McKinley Mutal Aid are providing the only home deliveries to many high-risk Navajos, Zunis and others in the region. 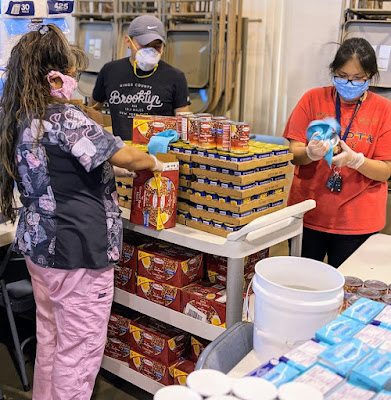 McKinley Mutual Aid thanked T&R Pawn - Market for supplying canned meats for the past month and a half! Since many in the area do not have electricity or refrigeration, and many of those sick with the virus are too weak to cook, the canned meats are helping meet an urgent need. The volunteers said, "These are definitely some of the favorite items in our food boxes, and they have been difficult to get in bulk from other sources. Thank you for your continued support." 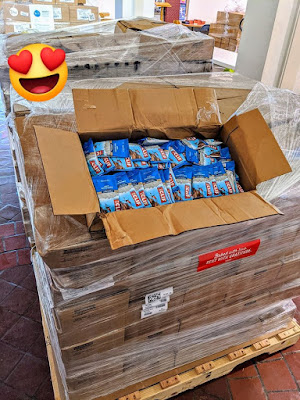 McKinley Mutual Aid said, "Big thank you to Clif Athlete and former World Tour rider Peter Stetina for donating 20,000 Clif Bar to Mckinley Mutual Aid! You will now see 10 of these in every box for the next two months. Thank you Silver Stallion Bicycle & Coffee Works for the connection. We look forward to continued collaboration."
Posted by Censored News, publisher Brenda Norrell at June 05, 2020