SANTA ROSA, California -- On the evening of Sunday, May 31st, Marqus Miles "Red Bear" Martinez was hospitalized due to being shot at point-blank range with a sting-ball grenade by police in Santa Rosa, California.

Martinez was on the corner of College and Mendocino at the time of the incident. He was helping protect a group of youth that were being harassed with tear gas. Moments after the tear gas was shot, Martinez was shot in the face with a sting-ball grenade.


The impact knocked out four of his front teeth, lodging three of the teeth into the roof of his mouth and one in his tongue. His lip was split into three, his jaw was fractured and required reconstructive surgery at Stanford Hospital in Palo Alto, California.
The Santa Rosa Police Department did not give aid after shooting directly at Martinez. It has been verified by Martinez and other protestors that the officer that shot Mr. Martinez was less than 10-15 feet away. Additional injuries have been reported in the community but not reported in the press. 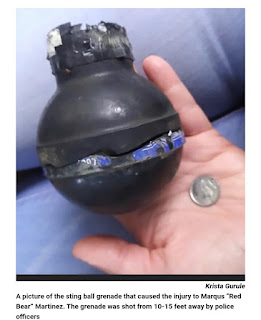 “It seems to me like I was singled out, they saw me with my phone recording and then they shot directly at my face with a plastic-type of grenade. After that I ran, I didn't understand why they were meeting us with such force, we were only trying to talk with the police, we were being peaceful,” said Martinez.

On the night of the violent incident Martinez was a part of a peaceful protest in downtown Santa Rosa. The intent of that night for Martinez was to address the major worldwide issue of police violence, the killing of George Floyd, and to show his solidarity to this movement of police reform. Marqus is a human rights activist, he has been committed and has stood on the front lines of ending police brutality since his youth. 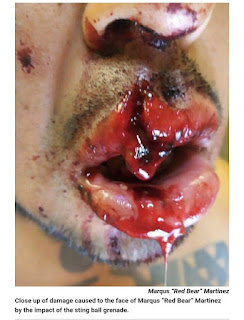