There is a suppression of the facts about the current spread of coronavirus in the United States. The spread of the virus within the U.S. Border Patrol is hidden in the statistics. The total numbers of those with the virus and dying from the virus in each prison and nursing home are hard to find, if they exist at all for the public.

The tragedies continue on the Navajo Nation.

One Navajo family burying their loved one said the Silvercreek Mortuary in Tse Bonito, New Mexico, was full of deceased. Their loved one was being kept outside in an unrefrigerated gurney, the family told Censored News. The mortuary is located at the boundary of the Navajo Nation near Window Rock.

One of our readers in Lukachukai said the cemetery was full and they have started a new graveyard. He said last week that there was a funeral every day. Lukachukai is one of the 110 local chapters on the Navajo Nation.

The Navajo Nation government currently has more than 500 burial assistance applications, according to a tribal source.

The Navajo Nation reports there have been 308 deaths from the coronavirus, as of Saturday, June 13.

Suppression in Florida, and exposures of the virus in grocery stores

As the Trump administration pushes states to open up, in an attempt to rescue the economy, the Florida woman who built the state's database said she was fired after an order to suppress the numbers of people with the coronavirus in Florida.

Where else are the numbers being suppressed, or kept out of sight? If you want to find out the grocery stores or WalMarts in your state where workers have coronavirus, you likely will not find those facts.

Why aren't other states letting people know which grocery stores have workers with the virus?

Nationwide 482 Border Patrol agents and staff have coronavirus and five have died.

The Border Patrol isn't warning Tohono O'odham, or anyone else on the Arizona border, about the agents with the virus. The agents are not wearing masks, and are breathing in people's faces when the agents harass them at checkpoints and in isolated areas of the Tohono O'odham Nation, during unwarranted traffic stops based on racial profiling.

What else is being suppressed: Each day last week, elderly residents of San Juan and McKinley County nursing homes in Farmington and Gallup, New Mexico, died from coronavirus. How many have died? Where are the totals? A large number of elderly have died at Life Care nursing home in Farmington. Where is the total number?

These elderly are dying sad and alone. The nursing homes in New Mexico were already cited in previous years for failed care and unsanitary conditions. Now these elders, the wisdom keepers, are ending their rich and vibrant lives in these horrible conditions.

What about the prisons full of migrant children?

Where are those statistics for Arizona and New Mexico? How many migrant children illegally imprisoned in violation of international law have the virus? How many have died?

Search for these numbers and you will discover what I have discovered: It is very difficult to find those numbers, if they exist in public at all.

Terry Smith, Dine', said, "Systematic genocide and depopulation that is continuing from the time they passed out blankets laced with smallpox?"

"They now want the Native American, minorities, poor, aged, those with pre-existing conditions to all die off? Remembering what Hitler said to a U.S. president, ”We learned it from you,” when he (Hitler) was referring to genocide," Smith said.

On the Navajo Nation, the continuing tragedy

Below: Current number of coronavirus cases on the Navajo Nation. June 12, 2020 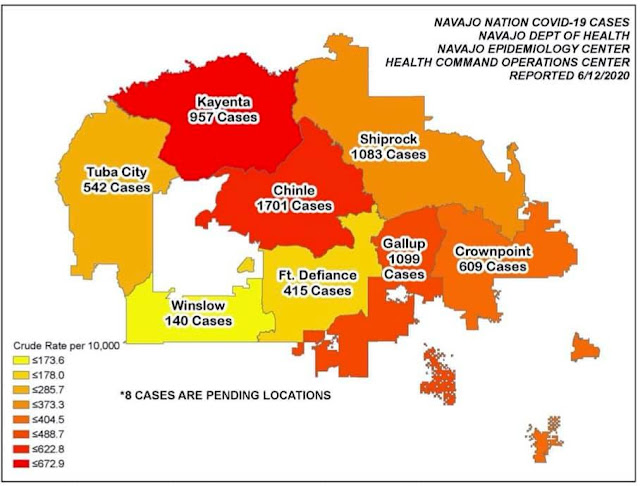 The total number of positive COVID-19 cases for the Navajo Nation has reached 6,554.


Arizona politicians are trying to suppress the fact of the spike in cases currently in Arizona, one of the most dangerous states in the nation now for the spread of the virus, along with Texas.

On May 5, President Trump came to Arizona to push for opening the state up with new jobs. Trump met with Native leaders at the Native Roundtable in Phoenix and promoted the rapid Abbott test, giving some of those tests to the Navajo Nation. The FDA said the Abbott tests are faulty, with up to a 50 percent fail rate.

It was later exposed that Trump's personal valet had the coronavirus at the time of the Native Roundtable in Phoenix. In the weeks that followed, it was revealed that Trump's former White House aide had created a scam mask selling operation and sold defective masks, made in China, to the Indian Health Service for the Navajo Nation. The masks are now the focus of a U.S. Congressional probe.

The deaths reported from the virus on Saturday in New Mexico, show the alarming new pattern of the virus claiming the lives of those in their 40s and 50s in San Juan and McKinley Counties.

McKinley County -- which includes Gallup, portions of the eastern Navajo Nation, and Zuni Pueblo -- has the largest number of new cases currently in the state.

Brenda, I was unable to share this article on Twitter. They say the article may be "harmful". Please take care & Be Safe. Peace.
Bonnie Walker

Censored News links have been blocked by Twitter since 2016, when we exposed the security and off duty police officers responsible for the attack with dogs at Standing Rock. Thanks for your concern.

I'm so sorry Brenda. Somehow I was able to post your June 8th article related to the increased spread of #COVID19 in the Navajo Nation & elsewhere. I don't have a lot of followers on Twitter, but hopefully a few people may have read your article. Pease.

Bonnie, thank you. In some of the articles on Twitter, I used a shortened link to get around the censorship. Some of the other links are from Indybay, where I also post. Thanks, Brenda

Miigwech for all you do Brenda!!