Supporting an Enemy of the People during the Pandemic: Navajo Vice President attends Trump megachurch rally in Phoenix

PHOENIX -- Many Navajos were horrified to hear that Navajo Vice President Myron Lizer attended the Trump rally at the megachurch, Dream City Church, in Phoenix on Tuesday, as the coronavirus was increasing at an alarming rate in Phoenix, hospitals were in emergency mode in Arizona, and Dine' families were fighting to both stay alive and recover from the loss of their loved ones during this pandemic.

It is a harsh reminder of the history of the elected Navajo Nation government -- which signed the leases for the coal mining, power plants and oil and gas fields between corporations and the Navajo Nation -- and then failed to use revenues for water and electricity for the people.


For 50 years, Dine' at Big Mountain and Black Mesa suffered because of the failure of the elected tribal government. The water and coal went to produce power for southern Arizona, and elsewhere in the Southwest, while the people suffered. All across the Navajo Nation, Dine' need running water, especially now in times of the coronavirus pandemic.

"I have no words for this," was one person's response to Lizer attending the Trump rally.

"I can't believe that Navajo Nation Vice President Myron Lizer would attend and disregard all the things they've put in place and mandated across the Navajo Nation. (Navajo President) Jonathan Nez how could you allow him to be so reckless?"

"This is disrespecting your own people. After all we've lost, you guys think Myron supporting Trump is okay? Talk about a betrayal to your own people. We demand a public announcement that Myron Lizer will be in quarantine for two weeks after attending this rally, when there is record-breaking Covid-19 numbers, and it was held indoors."

Another person responded, "Navajo Nation Vice President Lizer shows us who he really is, even after all the intentional neglect of Navajo by the Trump administration during the ongoing COVID-19 pandemic issue, and even after the continued mistreatment of Natives and people of color by Trump and MAGA. He's really screwed up. Sad."

Expressing disappointment in Lizer for both supporting Trump, and traveling to a large gathering during the pandemic, Dine' pointed out that it was a church pastor of the Nazarene Church that initially brought the coronavirus to the Navajo Nation at a church rally on March 7.  Now, the virus has claimed the lives of 347 Navajos.

Dine' said the current tribal administration is misusing its elected office of the presidency and attempting to 'Christianize' the Dine'.

One Dine' said of Lizer's recent radio broadcast promoting Trump: "Lies and more racism. Get off Lizer, it's 'unclean;' Stop the colonization, stop trying to christianize us, you do not represent our Dine culture. We are indigenous. Just stop; you do not know what we are about."

As of Wednesday, the Navajo Nation reported another 69 new cases of the coronavirus, bringing the total number of positive coronavirus cases to 7,157.

There were 11 more deaths reported on Wednesday. There have been 347 deaths of Navajos from the virus.

As the coronavirus continues to spread on the Navajo Nation, the Office of the President and Vice President has repeatedly total Dine' to stay home, and instituted curfews.


Censored News asked the Navajo Nation press officer to respond to these questions:  'Was Vice President Lizer present at the megachurch rally, what was his purpose for being there, was this a Navajo Nation sponsored event, and whether tribal funds were used.'

As of Thursday, Censored News has not received a response from the Navajo press officer.

The Navajo Times has a news story on this online today. Vice President Lizer makes excuses for his attendance at the megachurch rally. It is basically a coverup story of his support for Trump and attendance at the rally.

The Navajo Times continues to employ a non-Indian reporter to write these important stories, instead of hiring Navajos and Native Americans, as the Navajo Preference in Employment Act requires.

The Navajo Times article is more of a press release for Lizer than a news article since it is one-sided and does not include any criticisms or comments from Dine' regarding Lizer's support for Trump, or criticisms for his attendance at the Phoenix megachurch rally during this pandemic.

As Arizona hospitals struggled to meet the needs of the surge in coronavirus cases this week, toppling previous records of the virus spread, the coronavirus claimed more lives across the state.

The Cocopah Nation mourned the loss of Vice-Chairman J. Deal Begay, Jr., 53, who passed away in the early hours of Sunday, June 21, at the Yuma Regional Medical Center in Yuma, Arizona.

“It is with great sadness that we announce the death of Cocopah Tribal Vice-Chairman J. Deal Begay Jr. We are shocked and devastated with this unexpected news,” Cocopah Tribe Chairwoman Sherry Cordova said in a statement released on Monday, confirming that the Vice-Chairman had tested positive for COVID-19.

At the Native Roundtable in Phoenix on May 5, which Vice President Lizer also attended, Trump promoted the Abbott rapid coronavirus test, which the FDA says has a 50 percent fail rate. Trump gave some of the Abbott tests to Lizer.

At that time, Trump's personal valet, a member of the U.S. Navy, had the virus. Trump was not wearing a mask. https://bsnorrell.blogspot.com/2020/05/coronavirus-spreads-to-white-house.html

Now, it has also been exposed that a former White House aide of Trump sold defective masks to the Indian Health Service for the Navajo Nation. This is now the subject of a Congressional probe.

While Navajo Vice President Lizer was pandering to Trump on Tuesday, the Cheyenne River Lakota in South Dakota were filing a lawsuit against Trump.

The Cheyenne River Sioux Tribe filed a lawsuit in the fight over coronavirus checkpoints on its land. The tribe filed a federal lawsuit that names President Donald Trump and White House officials for “threatening to take unlawful actions to shut down the Tribe’s Health Safety Checkpoints.”

The complaint argues the defendants abused “the power of the federal government, to coerce the Tribe to dismantle” its checkpoints and when that failed, threatened the tribe’s law enforcement contract.

The reckless actions by Navajo leaders do not honor the lives of those dying.

Almost every day, elderly die from the coronavirus in the counties bordering the Navajo Nation in New Mexico. Those are San Juan County (Shiprock and Farmington area) and McKinley County (Gallup, a portion of eastern Navajo Nation and Zuni Pueblo) in northwest New Mexico. There is very little news coverage of this.

Censored News has asked New Mexico State for a total of all those who have died from the virus in each nursing home, and has not received a response. Life Care Center in Farmington and Red Rocks in Gallup are among the nursing homes reporting ongoing continuous deaths from the coronavirus.

U.S. Border Patrol silent about spread of virus in agents on Arizona border

Elsewhere in Arizona, the U.S. Border Patrol reports 70 agents and staff on the Arizona border have coronavirus. This is a rapid increase over the past two weeks.

However, the U.S. Border Patrol statistics for Arizona remain hidden away on its website. The Border Patrol has not advised anyone as to where the agents have been, or who they have infected.

The U.S. Border Patrol agents continue to breathe in the faces of Tohono O'odham during harassment stops, based on racial profiling, on the Tohono O'odham Nation. The agents are not wearing masks.

Nationwide, 710 U.S. Border Patrol agents and staff have coronavirus and five have  died. The media has failed to alert the public to this danger.

On Wednesday, the Navajo Nation reported: 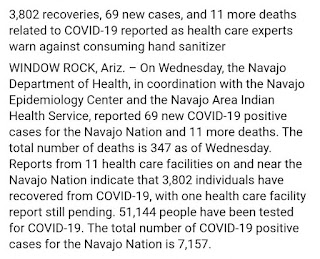 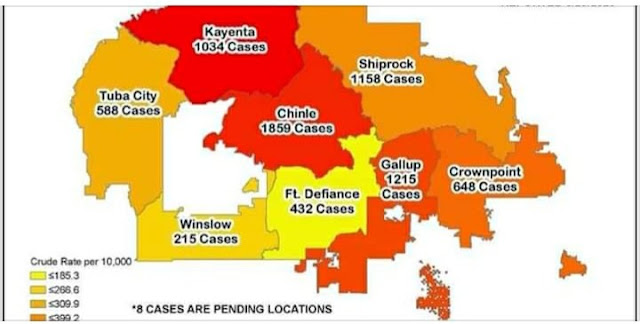 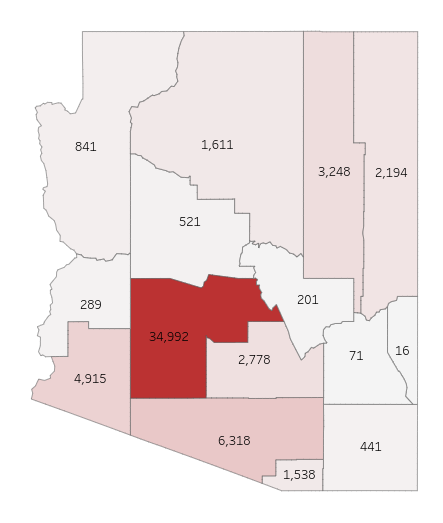 Arizona reported 79 deaths, the highest single day of deaths today, Wednesday.
The largest number of cases is in Phoenix, Maricopa County.
About one-half of the cases are under the age of 45.
The highest rate of death is for those over 65. Health officials said the virus is rapidly spreading as young people go to eateries, bars and social events, and then infect their families.
Among the closures in Arizona are the Gila River Indian casinos, following one death from the virus, and closure of the Tohono O'odham Nation casino at Ajo.
https://www.azdhs.gov/preparedness/epidemiology-disease-control/infectious-disease-epidemiology/index.php#novel-coronavirus-home


The names of some of those commenting on Lizer attending the Trump rally have not been used here, due to the pattern of Navajo Nation government officials seeking to retaliate against those who speak out.
at June 24, 2020