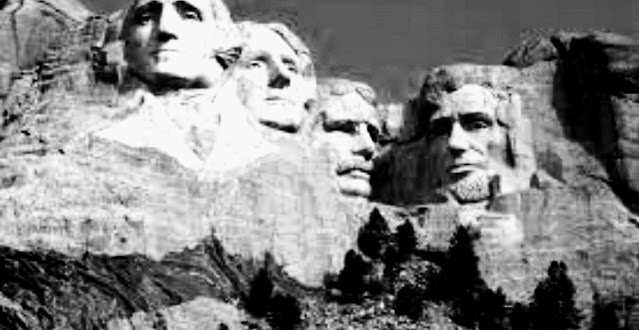 The hypocrisy of these presidents who gaze down from the Black Hills as though they are the champions of law and order is a veritable witch’s caldron of hate. -- Steve Melendez, President, American Indian Genocide Museum

The Homestake Gold Mine, in Lead, South Dakota, operated for 125 years and produced 41 million troy ounces of gold ( $72.6 billion dollars at today’s gold prices of over $1771 dollars an ounce). As George Hearst and his partners consolidated his ownership of the mine and surrounding claims, he bought newspapers in nearby Deadwood. To further influence public opinion concerning the seizure of reservation gold, they sold shares of the mine and listed it on the New York Stock Exchange. From its public offering in 1879, It became one of the longest-listed stocks in the history of the New York Stock Exchange. George’s son, William Randolph Hearst, would later buy the San Francisco Examiner on his way to becoming a newspaper mogul and one of the richest men in America. This son of the man who stole a gold mine, had his life of influence and affluence exposed in the film Citizen Kane.

In the summer of 1874, Lt. Col. George Armstrong Custer was sent into the Black Hills by Gen. Phillip Sheridan to search for gold. This was in direct violation of the Treaty of Fort Laramie of 1868. Today, there is a large photograph at the mine of Custer and his entourage entering the Black Hills. The caption information tells us that after gold was discovered, many miners came into the Black Hills in defiance of the army and the Indians but fails to mention that Custer’s army was violating the 1868 Treaty. Neither does the caption information remind the visitors to the mine that article 6 of the U.S. Constitution calls a treaty the supreme law of the land.

Custer came into the Black Hills with 1,000 soldiers, over 100 covered wagons, 2 or 3 gatling guns, a cannon, a 16 piece brass band mounted on white horses, and two prospectors who were the experts on gold. On July 30th, 1874, Custer sent a dispatch to Ft. Laramie which read, “Gold has been found in paying quantities. I have upon my table 40 or 50 small particles of pure gold. In size averaging that of a small pinhead. And most of it found today from one pan full of earth.” Today, the area where the placer gold (gold carried by mountain streams) was found, is the town of Custer, South Dakota. Probably the most significant bit of information absent from the Custer photograph at the mine is what the President of the United States said to Congress the following year. “…The Discovery of gold in the Black Hills, a portion of the Sioux Reservation, has had the effect to induce a large immigration of miners to that point. Thus far the effort to protect the treaty rights of the Indians to that section has been successful, but the next year will certainly witness a large increase of such immigration. The negotiations for the relinquishment of the gold fields having failed, it will be necessary for Congress to adopt some measures to relieve the embarrassment growing out of the causes named. The Secretary of the Interior suggests that the supplies now appropriated for the sustenance of that people, Being no longer obligatory under the Treaty of 1868, but simply a gratuity, may be issued or withheld at his discretion.” President Ulysses S. Grant’s entire message can be found in Messages and Papers of the Presidents Vol. 9 Pg. 4306.

The fact that President Grant would suggest that a starvation policy should be implemented may be difficult for most Americans to believe but the attitude of that day can be found in the words of another President whose image is carved 40 miles south of the Homestake Mine on Mt. Rushmore.

“The Most ultimately righteous of all wars is a war with savages. The rude, fierce settler who drives the savage from the land lays all civilized mankind under a debt to him. American and Indian, Boer and Zulu, Cossack and Tartar, New Zealander and Maori,--in each case the victor, horrible though many of his deeds are, has laid deep the foundations for the future greatness of a mighty people. The consequences of struggles for territory between civilized nations seem small by comparison. Looked at from the standpoint of the ages, it is of little moment whether Lorraine is part of Germany or of France, whether the northern Adriatic cities pay homage to Austrian Kaiser or Italian King; but it is of incalculable importance that America, Australia, and Siberia should pass out of the hands of their red, black, and yellow aboriginal owners, and become the heritage of the dominant world races.” The Winning of the West Vol. 4, The Indian Wars, Pg. 56 by Theodore (Teddy) Roosevelt.

If you ever have the opportunity to visit the mass gravesite of the Wounded Knee Massacre, you must reflect on why such a thing happened. It was the 7th Cavalry that did it, so the average American is led to believe that it was revenge for Custer’s Last Stand at the Little Big Horn. But knowing President Grant’s words to Congress is to know that the gold was on the Sioux Reservation and that Custer was there in violation of the Treaty of Ft. Laramie of 1868. And to know President Grant’s words to Congress is to know that he called on America to starve the Indians off their land. When the President of the United States openly calls for the deliberate and systematic destruction of a people, what other conclusions can be reached? If you ever visit the mass grave site at Wounded Knee on the Pine Ridge Reservation in South Dakota, you can know, beyond a doubt, that the men, women and children who were thrown into this trench, were the victims of genocide.

The attitude of genocide continues to this day. It exists in the form of the secret foundation of American law. In legalese it is called the 1823 Supreme Court decision of Johnson v. M’Intosh. In 1990 it was written in plain English. It makes so little sense that it does not stand up in the light of day but that is why it was kept secret for such a long time. In commemoration of Christopher Columbus’ 500 year anniversary of his “discovery” of America, Black’s Law Dictionary printed the legal definition of the “Doctrine of Discovery”. This racist colonial law is the fulfillment of Teddy Roosevelt’s desire that, “...America, Australia, and Siberia should pass out of the hands of their red, black, and yellow aboriginal owners, and become the heritage of the dominant world races.”

The definition that Black’s Law Dictionary printed in 1990 does not appear in subsequent editions. It reads:

“Discovery. International law. As the foundation for a claim of national ownership or sovereignty, discovery is the finding of a country, continent, or island previously unknown, or previously known only to its uncivilized inhabitants.”

This is the injustice that the native people live under every day in South Dakota. Even though they have lived on the land from time immemorial, the white man’s law says they lost the title to their land when Columbus discovered it. The hypocrisy of these presidents who gaze down from the Black Hills as though they are the champions of law and order is a veritable witch’s caldron of hate.

Some of this is new information for me. Thank you for helping to expose the "Lie", The "myth".
As statues (myths) are being toppled the truth is revealed. Face the truth or turn away from it—turn away face it --face it turn away... (Note: Face it turn away is not a question; it is a decision).

Respectfully and in Unity we can learn and know the true history—truth. And with courage we can "DISRESPECT" All such monuments and there true nature, there true intent; Simultaneously DISCREDITING the "man" that is placed upon a pedestal.