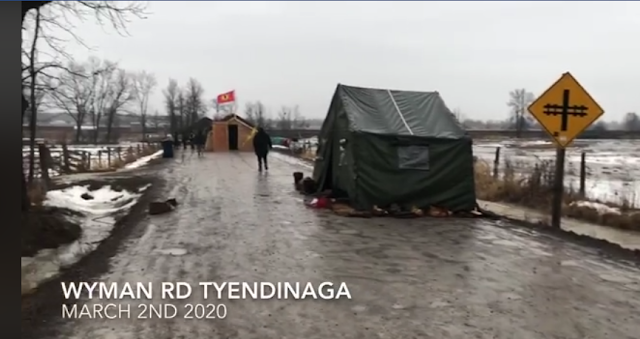 Mohawks at Tyendinaga continue to build their camp in support of the Wet'suwet'en alongside the rail tracks.
Video by Real Peoples Media
Article by Brenda Norrell
Censored News
March 3, 2020

Although the mainstream media falsely led people to believe that an agreement had been reached between the Wet'suet'en and governments of Canada and BC, this was not the case. A tenative draft agreement, which must be considered by the people, was created which deals with land and title -- but not with the issue of the pipeline, Coastal GasLink on Wet'suwet'en land.

Wet'suwet'en Hereditary Chief Smogelgem said on Twitter, today, March 3, "BC was supposed to try and get dialogue going with the proponent CGL to consider a different approach. It truly looks like they completely ignored our biggest concerns with the project to date - 1 super sensitive ecosystems and - 2 zero consultation with the actual title holders."

Chief Smogelgem said, referring to a news article, today, "Premier maintains Wet'suwet'en deal marks no change for Coastal GasLink - This might be the deal-breaker. Fraser promised to work in this. His arrogant boss let his ego guide his mouth again." https://vancouversun.com/news/premier-maintains-wetsuweten-deal-marks-no-change-for-coastal-gaslink

In support of the Wet'suet'en, Mohawks at Kahnawake continued alongside the tracks south of Montreal and commuter trains there remain halted. Rallies and blockades continue today elsewhere in Canada. Listen to the Kahnawake voices on the frontline at Coffee with My Ma.