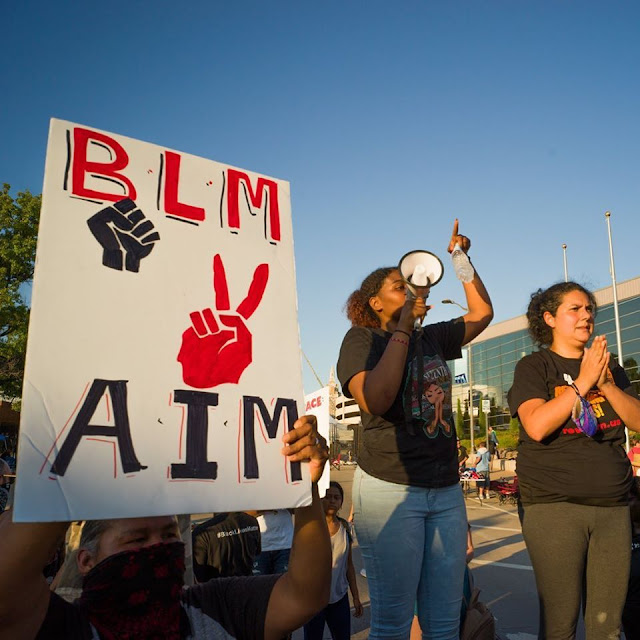 Indigenous Rising Media said, "The ugliness of the hate Donald Trump represents will never compare to the beauty of when we show up for one another to protect the sacred. We will keep showing up in defense of Black lives. We are connected. As Auntie Assata said: "It is our duty to fight for our freedom. It is our duty to win. We must love each other and support each other. We have nothing to lose but our chains.” No one’s free until we are all free.

Indigenous People and Veterans Arrested in Tulsa at Trump Rally

TULSA, Oklahoma -- Indigenous freedom fighters and veterans were arrested outside of the Trump Rally in Tulsa, after trying to raise “Defund The Police” and “End The War On Black People” flags and express their resistance to this administration and demand an end to state violence, defunding of police forces, and investment in healthy sustainable communities.

This action was in direct response to Trump coming into Tulsa by a collective group of Indigenous and veteran organizations including About Face: Veterans Against the War, Indigenous Environmental Network, Climate Justice Alliance, It Takes Roots, Grassroots Global Justice, Veterans For Peace, BlackOut Collective, Ruckus Society and Rising Tide.

“The soil of so-called Oklahoma is still soaked with the tears and blood from the pain white supremacy has inflicted on our Indigenous and Black ancestors” said Ashley McCray, Organizer for Indigenous Environmental Network and Unify Tulsa who was arrested outside the rally. “I will continue to show up in defense of Black life and demand Oklahoma invest in creating communities of compassion to heal from the trauma we are still forced to endure.”

Tulsa is home to the historic Greenwood district, the birthplace and the site where Black Wall Street, a flourishing Black community, was destroyed, and its residents killed by a racist white mob in June 1921. It is also the location where the current occupant of the White House, who has continuously expressed and stoked racism, will hold his first rally since the onset of the COVID-19 pandemic.

“As an Afro-Latina combat veteran, I’ve seen first hand the way police and military are leveraged against Black, Brown and poor communities for the benefit of the rich,” said Brittany Ramos DeBarros from About Face and Veterans for Peace. “I deployed to war based on lies believing I was fighting for freedom and safety, only to realize I was used in endless wars for profit. I’m proud now to actually get the chance to fight for the freedom and justice we were all promised.

Update:
UNIFY TULSA
Jail support update: 8 comrades were arrested last night, including 3 of the Unify Tulsa coalition. All have been bailed out and set up with legal support. THANKS TO ALL WHO CONTRIBUTED TO OUR COMMUNITY DEFENSE EFFORTS. #TulsaProtest #NoTrumpInTulsa #Greenwood #BlackWallStreet
Saturday evening:
. 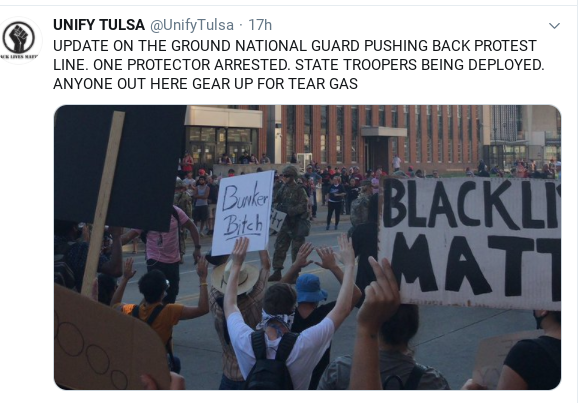