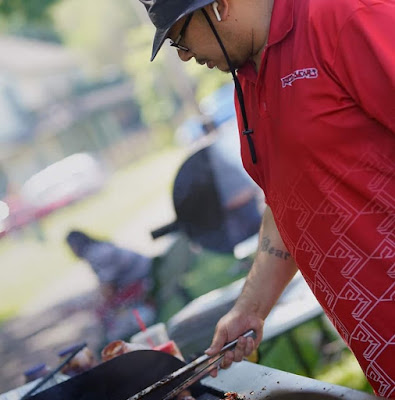 Article by Brenda Norrell
Censored News
MINNEAPOLIS -- The family of Muck-Wa Roberts, Sr., said he was shot protecting Little Earth housing. Roberts is the athletic director at Little Earth Red Bears.
Rose Marie Roberts said, "Please prayers are needed. My husband Muck-Wa Roberts Sr. has been shot protecting Little Earth."
Tatanka Banks said, "I would like to ask for prayers for my nephew. He was shot while protecting Little Earth housing."
"My nephew is a great warrior. I know his grandpa Dennis Banks would be proud. Muck-Wa Roberts Sr. is a great man not only is he my nephew, brother, father and husband to Rose Marie Roberts, but he's also a coach. He coaches Little Earth kids for basketball and baseball and cooks a heck of a good meal for these kids. He coached the basketball and won the city championship."
"This kid, my nephew, did exactly what his granda told him. Sometimes you have to take a bullet. I'm very proud of him also. The project is in south Minneapolis."
Update: Roberts was in stable condition and was at home and resting at noon today, Monday.
Update on Tuesday:
RoseMarie Roberts, wife of Muck-Wa Roberts, who was shot protecting Little Earth housing, said she is in need of sterile pads. Please go to her Facebook page for more information.
Rose Marie said Muck-Wa is resting now.
If you are in Minneapolis and can help out, please Facebook message her.
Update on Wednesday:
"We would like to thank the community and everyone that has helped with the medical supplies for coach Muck-Wa Roberts Sr. They were very much needed we got a lot again Miigwetch to all," RoseMarie said today.

Our community is not a reservation. Instead, we are a united people of 39 different tribes, hoping to share our sense of togetherness with others.

Today, Little Earth is comprised of four organizations with a unified management structure. Each organization has a separate function, however all work cooperatively to build our community and create opportunities for Indian people to achieve self-determination.

MNN. June 21, 2020. We have always and continue to duck the bullets of the invaders to our land, from pole to pole, ocean to ocean. This writer realized he had done little so far to help solve the ongoing pandemic facing indigenous people. He sent this letter to New York State Governor Cuomo, CNN, the New York Times and Mohawk Nation News: