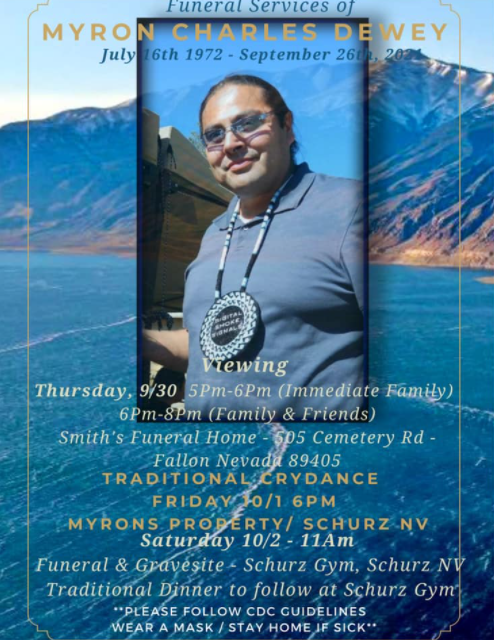 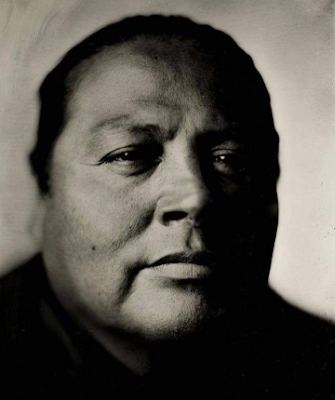 Myron is a citizen of the Walker River Paiute Tribe. His numunanea (Indian Name) is Ahu-auh-bud-shoe-knaw-me "Strong Thinker".

Myron was born on July 16, 1972, to Herbert Dini Jr. of Schurz and Cynthia Dewey of Bishop, CA in Schurz, Nevada. Myron attended Gabbs K-12 Schools. Myron joined the BIA Western Nevada One Firefighting crew out of Carson City. Shortly after, he joined the Black Mountain Hotshot Crew fighting fires throughout the Western United States. During this time Myron received his GED, later attending Haskell Indian Nations University in Lawrence Kansas receiving an Associate of Arts in Computer Information Systems and a Bachelor of Science in Business Administration in 2002 and 2003 respectively.

Myron returned to Schurz with the goal of using his education to give back to his tribal community. He innovated the use of technology in his tribe’s language revitalization efforts along with advocating for an Internet infrastructure to improve education for future generations. He founded his business, Digital Smoke Signals, during this time.

Myron’s motivation for success always included family, culture, and language. With these in mind, Myron enrolled in the Indigenous Nations Studies Master’s program at the University of Kansas. Receiving his degree in 2007. Myron continued applying his education and experience to contract with Indigenous nations and communities in articulating the 21st Century technology mindset focusing on online media/film and bridging the digital divide in our communities.

Myron met the love of his life, Deborah Parker, in Tulalip, Washington. During his time in Washington, he began teaching college technology courses with Northwest Indian College including digital media and mobile app building. Focused on the youth, Myron continued his work contracting with tribes to provide video/film editing and mobile app projects. In 2014, Myron experienced a near-fatal medical complication. Through prayer and a strong, enduring spirit, he survived. This experience was a defining moment in his life. This led to an even stronger renewed effort to promote and advocate for all Indigenous peoples.

Myron’s connection to his ancestors and Creator was stronger than ever. It was at this point, he accepted and acknowledged his path forward was guided by the Great Spirit. His path led him to Standing Rock, North Dakota standing with the Water Protectors in 2016. His life, as he knew it, was changed forever. Myron’s efforts solidified his legacy as a protector for all our people (tamme no’oko numudooe). Myron received worldwide acclaim and awards for his drone work and Awake documentary. He was a visiting professor at Duke University and MIT as well.

Myron traveled the world sharing his knowledge, prayers, and passion for Indigenous peoples in Japan, Taiwan, New Zealand, Australia, Canada, and Mexico. He was a 2010 AIO Ambassador alumni. He was a fierce advocate for MMIW, Thacker Pass, boarding school historical/cultural trauma, and against the proposed lithium mine at PeeHee Mu'ha.

Myron is a Protector of the Sacred. He carried the natusooa (medicine) for the people. He offered the medicine to all in need.

Funeral Services will be held Saturday, 10/2 at 11 am Walker River Gym, 1127 Cotton Wood Drive, Schurz, NV 89427 with a Water Protector escort from Gym to Cemetery. *Traditional dinner to follow

If we omitted anyone, we apologize in advance. 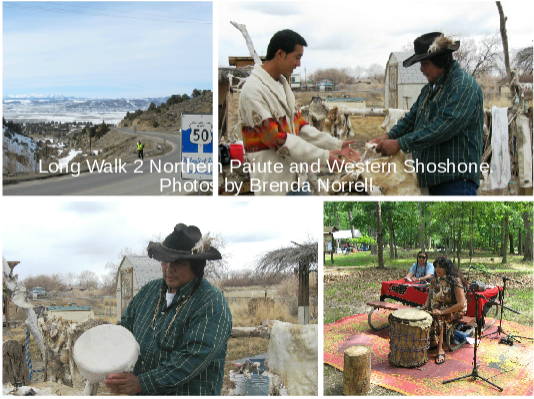 STILLWATER, Nevada – Paiute elder Dell Steve said Wovoka had a great vision and encouraged Indian people to rejoice. This was mistaken as an uprising by US soldiers and those who followed Wovoka’s vision were massacred at Wounded Knee, S.D.
Speaking to the Longest Walk northern route's talk radio, Steve said Wovoka told of a time when the Indian people would regain their land and the buffalo would return. Steve said now the earth is being destroyed by technology and abuse.
When asked what people could do to stop the destruction, Steve said, “It is too late.”
Describing the struggle to protect the remains of their ancestors, Steve said the Paiute are engaged in a battle in the Ninth Circuit Court for the return of the remains of one of their ancestors, “Spirit Cave Man,” found at a cave in Grimes Point. The remains are among the oldest human remains found on this continent, dating back 9,000 to 10,000 years.
Read more »
at September 29, 2021 No comments: