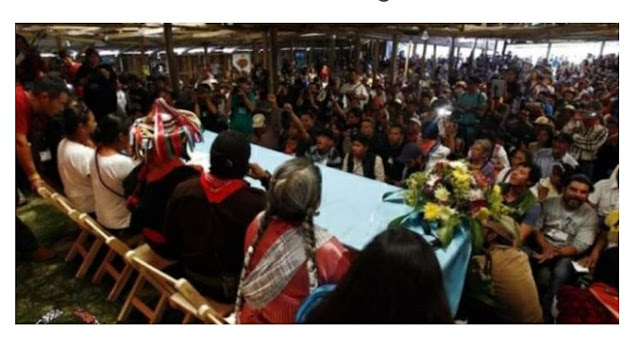 "Fear has changed us into anger and rebellion," CNI_CIG in the face of espionage and harassment in virtual meeting

POZOL COLECTIVO September 5, 2021 CNI-CIG COMPLAINTS INFILTRATION, ESPIONAGE, THREATS AND HARASSMENT IN A VIRTUAL COORDINATION MEETING
En espanol https://pozol.org/?p=19469
Today, September 4, 2021, while we were in session in a virtual meeting of the coordination and monitoring commission of the National Indigenous Congress-Indigenous Government Council, to analyze and make decisions on various issues related to the participation of the and the delegates of the CNI-CIG and the Front of Peoples in Defense of Land and Water, in the Tour for Life, together with the delegation of the Zapatista Army of National Liberation, which will soon leave for the European continent, we were subjected to a blatant infiltration, followed by intermittent threats and harassment throughout the meeting, which for that reason lasted 7 hours, from 11 a.m. to 6 p.m.

When we were discussing the point of the Campaign for Truth and Justice, together with the victims of crimes of the bad governments of the past and now, a voice broke into the meeting with a volume greater than that of the other participants and he heard a man, with an apparently South American accent, who sent messages against comrade Carlos González, a member of the CNI-CIG's coordination and monitoring commission, saying: “shut up, they are going to cancel you," “shut up Carlos, shut up son of a bitch," “ the problem is Carlos ”and“ we are going to look for you." It was because of the above that several participants proposed to abandon the session of the digital zoom platform. Immediately, the same voice insisted "If we go, we must exclude Carlos."

These messages did not come from any of the participants in the virtual meeting of the CNI-CIG coordination commission, nor from any access authorized by the communication commission, so we left the session and looked for safer ways to conclude the meeting.

When establishing a new session in the zoom platform, agreed only between members of the coordination commission, through the signal program, it was entered with controlled access and corroborating identities. However, at a certain point, a user named "Sofia Ramírez" requested his entry and when he was not identified, he was denied access, but still managed to infiltrate, automatically changing his name to that of one of the participants and managed to say threateningly: "It's Gaby from Yucatán, she contacted the hacker and they hacked everyone," in open allusion to one of our colleagues.

At the same time, the WhatsApp group that we have used to communicate as a coordination commission was intervened and its name was changed to "I'm not leaving," a change allegedly made by a fellow member of the group who denied having done so. Likewise, a few hours before starting our meeting, comrade Omar Esparza, a member of the coordination commission and of the MAIZ organization, received 6 calls with the same voice from whoever broke into the videoconference.

Therefore, we denounce that it is a campaign of infiltration and harassment of comrades of the CNI-CIG peoples, who are organizing to defend their territory and life against the megaprojects of the bad government.

We condemn this infiltration and harassment, for which we hold the bad government and its espionage and intelligence systems responsible, reaffirming that our fight is for life and that our fear has been changed to anger and rebellion; and in it we do not surrender, nor do we sell out, nor do we give up. We are not afraid of them and we will not step back in this walk from below.

For the Integral Reconstitution of Our Peoples,
Never Again a Mexico Without Us

Coordination and Monitoring Commission of the National Indigenous Congress - Indigenous Government Council and Delegation of the CNI-CIG and the Front of Peoples in Defense of Land and Water in the "Tour for Life."
See videos on original post at: https://pozol.org/?p=19469
at September 06, 2021