Zapatistas 'Chiapas on the Verge of Civil War' 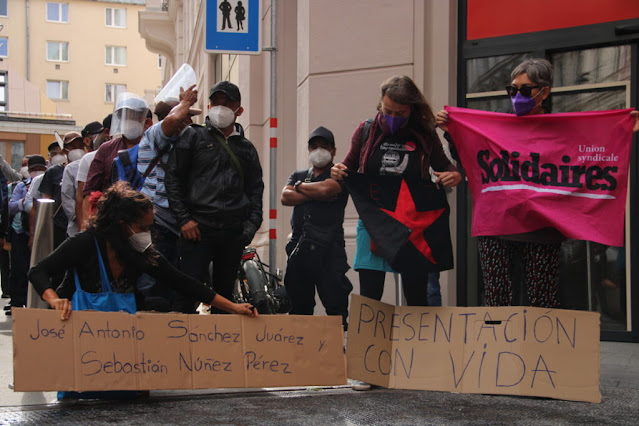 Chiapas on the Verge of Civil War

The ORCAO is a political-military organization with paramilitary characteristics: they have uniforms, equipment, weapons, and ammunition purchased with money they receive from [government-sponsored] “social programs”. They keep part of the money for themselves and use part of it to pay off government officials for reporting that they [the ORCAO] are complying with the terms of the social programs. They fire on the Zapatista community of Moisés y Gandhi every night with these weapons.


The EZLN has waited patiently as all avenues toward a solution were attempted and exhausted. While the Chiapas state government tried to sabotage and impede freedom for our compañeros, it was human rights organizations and the progressive Catholic church who made an objective assessment of what might happen.

Third: Kidnapping is a crime under both the bad government’s laws and Zapatista law. While the Chiapas state government has supported and covered up these crimes, the Zapatista Army of National Liberation took the necessary steps to free those who were kidnapped and to detain and sanction those who committed the crime.

Fourth: The only reason the conflict did not escalate into a tragedy was due to the intervention of the parishes mentioned above, human rights organizations, and the mobilizations and denunciations carried out in Mexico and, above all, Europe.

Fifth: The misgovernment of Rutilio Escandón is doing everything possible to destabilize the southeastern Mexican state of Chiapas:

It violently represses the normalistas [1].

It sabotages the agreements made between the organized teachers and the federal government, forcing the teachers to take more radical action to demand the agreements be complied with.

Its alliance with narcotraffickers forces indigenous communities to create their own self-defense groups, as the government does nothing to protect the life, liberty, and property of the population. It not only protects the narcotrafficking gangs, but also encourages, promotes, and finances paramilitary groups like those that are constantly attacking communities in Aldama and Santa Martha.

Its vaccination campaign is purposefully slow and disorganized, creating unrest in rural communities that it will no doubt exploit. Meanwhile, the rising covid deaths in these communities are ignored.

Its officials are stealing everything they can from the state treasury, perhaps preparing for a federal government collapse or betting on a new party coming into power.

And now they want to sabotage the departure of the Zapatista delegation participating in the European chapter of the Journey for Life. They ordered their ORCAO paramilitaries to kidnap our compañeros, leaving the crime unpunished, and trying to provoke a reaction from the EZLN, all in a state where governability hangs by a thread.

Sixth: If what the Ecologist Green Party of Mexico (PVEM) wants is to provoke a crisis with international repercussions so that it can destabilize the regime currently in power, they should call a referendum to revoke the presidential mandate.

The PVEM is one of the names used around here by the same old PRI. Sometimes they say it’s the PAN, sometimes the PRD, and now it’s the PVEM badly disguised as the Movement for National Regeneration [MORENA]. But it’s the same criminals as ever, and now they’re part of the misnamed “opposition” movement, a “fifth column” within the 4T [2].

Those responsible are: Rutilio Escandón and Victoria Cecilia Flores Pérez.

If what they want is to topple the federal government, or to cause problems in retaliation for the current federal criminal investigations against them, or to support one of the factions competing for power in 2024, then they should use the available legal channels and stop playing with the life, liberty, and property of the people of Chiapas. They should call for a vote to revoke the presidential mandate and stop playing with fire because they’re going to get burned.

Seventh: We call on Europe below and to the left and on the Sixth in Mexico and abroad to protest in front of Mexican embassies and consulates and at the government offices of the state of Chiapas, demanding an end their provocations and renunciation of their death cult. The date is Friday, September 24, 2021.

Given the actions and omissions of the state and federal governments regarding these crimes and previous ones, we will take the necessary measures to bring justice to the criminals in the ORCAO and the government officials who sponsor them.

From the mountains of southeastern Mexico,
In the name of the Indigenous Revolutionary Clandestine Committee-General Command of the EZLN