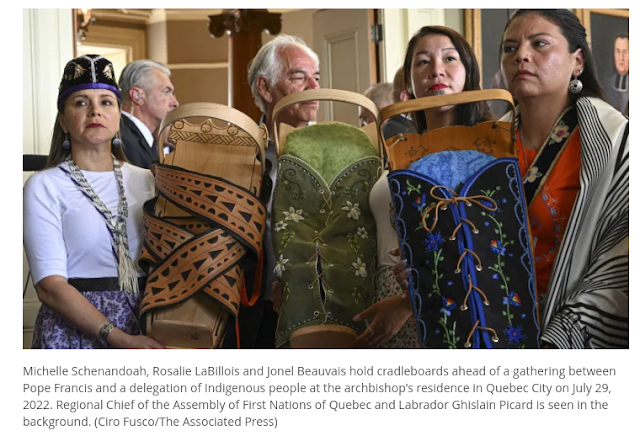 Indigenous women who were carrying cradleboards that they had intended to present to Pope Francis during a private meeting with residential school survivors were asked to leave the room before the pontiff entered.

The event had been scheduled as a moment for survivors from Eastern Canada to meet with the Pope in person at the archbishop's residence on Friday morning in Quebec City, a few hours before the pontiff's departure to Iqaluit.

Jonel Beauvais, a Kanien'kehá:ka Wolf Clan member from Akwesasne, said that while she was able to stay, she had to go to the back.

"They said that they only wanted survivors and not their supporters. So I'm not quite sure why you would invite supporters if they're not allowed to be in the room with the survivors," she said.

Read the full article at CBC
https://www.cbc.ca/news/canada/montreal/cradleboards-residential-school-children-unmarked-graves-meeting-pope-francis-1.6536527
at July 31, 2022 No comments:

On Saturday July 30, 2020, Pope Francis admitted the atrocities that were perpetrated against the indigenous people. “Yes, it is a genocide, yes, yes, clearly. You can say that I said it was a genocide,” the Pope said. The kahnisensera, mohawk mothers, added that “Guilt falls also on the Canadian government which funded the carefully planned genocide”.

MNN. CREE SINGS WORDS OF TRUTH TO POPE & THE WORLD

MNN. July 30. 2022. She was supposed to sing ‘O Canada’ to the Pope at Ste. Anne de  Beaupre in southern Quebec before he left for Iqualit in northern turtle island.  It turned out she wasn’t singing O Canada or to the Pope. She was voicing a truthful message to the indigenous people and to the whole world! 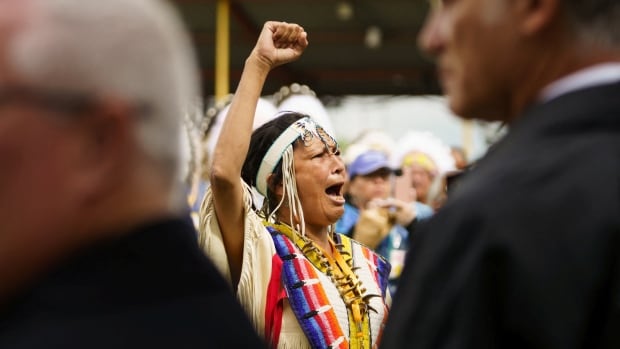 Her actual indigenous words were: “You are hereby served spoken law. We, the daughters of the Great Spirit and our tribal sovereign members cannot be coerced into any law, any treaty that is not the Great Law,” she translated later for CBC News.