Rivers: Border Rights and the Declaration on the Rights of Indigenous Peoples 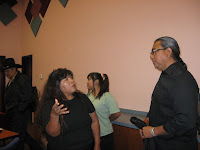 Rivers pointed out that the US is now the only country in the world failing to act on the Declaration. The border panel, sponsored by the Indigenous Alliance without Borders on Nov. 18, is now available on the web at Earthcycles and Censored News.

Speaking on Indigenous Peoples border rights, Rivers pointed out that Article 36 of the UN Declaration states: “Indigenous peoples, in particular those divided by international borders, have the right to maintain and develop contacts, relations and cooperation, including activities for spiritual, cultural, political, economic and social purposes, with their own members as well as other peoples across borders.”

Rather than adopt the Declaration, Canada endorsed it. Rivers said Canada maintains that it has jurisdiction over Indigenous Peoples and they are subject to the laws of Canada.

The US is currently reviewing the Declaration. Currently at issue is whether the United States and Canada will continue to dictate to Indigenous Nations, he said.

“The Declaration is a non-legal binding document. What that means is it has no legal teeth,” Rivers said. He said there are many policies, such as the American Indian Religious Freedom Act, Native American Graves Protection and Repatriation Act, and others, that American Indians still are struggling to have the United States act upon and enforce.

Although NAGPRA was established, Native people still have funeral and sacred items, items of spiritual and cultural significance, that have not been returned. He said museums around the world took items from Indigenous communities and medicine people, at a time when no laws were in place to prevent this vandalism and theft.

Native Americans know the return of these items can bring about healing and assist people who are suffering because of the loss of these items. The return of human remains, and proper burial, is high on the priority of Indigenous Peoples.

Because NAGPRA has not been fully enforced, Native people have suffered.

Rivers said what is at stake is self-determination, cultural issues, economic development and border issues. Since 9/11, various laws have been created that waive tribal, state and federal laws, including laws to erect a wall that not only impacts Indigenous Peoples, but the environment.

During the panel presentation, Rivers pointed out that Native people are asked to make cultural gestures, even "bless" fast food restaurants, but are not invited to the table by policy makers. Rivers said Indigenous Peoples are asked to "bless" fast food places such as MacDonalds which engage in practices that violate the rights of Indigenous Peoples.

"Too often Indigenous Peoples are sought out to conduct cultural gestures: Blessings of restaurants and casinos and photo ops at state, county and national events. But when it comes to making real changes and true and frank discussions about serious issues, Indigenous Peoples are rarely invited to the table," he said.

Meanwhile, in Canada, the government released this statement when it endorsed the Declaration, minimizing the impact of the Declaration:
"The Declaration is an aspirational document which speaks to the individual and collective rights of Indigenous peoples, taking into account their specific cultural, social and economic circumstances. Although the Declaration is a non-legally binding document that does not reflect customary international law nor change Canadian laws, our endorsement gives us the opportunity to reiterate our commitment to continue working in partnership with Aboriginal peoples in creating a better Canada."

Rivers pointed out that Border rights are among those stated in the Declaration on the Rights of Indigenous Peoples.

Article 36
1. Indigenous peoples, in particular those divided by international borders, have the right to maintain and develop contacts, relations and cooperation, including activities for spiritual, cultural, political, economic and social purposes, with their own members as well as other peoples across borders.
2. States, in consultation and cooperation with indigenous peoples, shall take effective measures to facilitate the exercise and ensure the implementation of this right.
Read more:
UN Declaration on the Rights of Indigenous Peoples
http://www.un.org/esa/socdev/unpfii/en/drip.html
Indigenous Border Roundtable Panel reveals racism in Arizona, violations of Native rights
http://bsnorrell.blogspot.com/2010/11/live-now-southern-border-indigenous.html
Also watch: Tohono O'odham Angie Ramon 'My son was killed by the US Border Patrol'
http://bsnorrell.blogspot.com/2010/11/tohono-oodham-angie-ramon-my-son-was.html
at November 18, 2010 1 comment:

By Brenda Norrell
Narcosphere
TUCSON -- The Indigenous Alliance without Borders hosted a Southern Border Indigenous Peoples Roundtable Symposium Thurs., Nov. 18. The panel focused on the political climate and racism in Arizona and how this affects Indigenous Peoples.

Topics include:
•Recent Changes to U.S. Immigration & Border Policies could erode or affirm indigenous peoples rights to maintain their cultural connections across the U.S. – Mexico border;
•Western Hemisphere Travel Initiative does not apply to Indigenous Mexican nationals who are culturally affiliated by blood relative, language, ceremonies and traditions
•Affects of Racism and negative political climate in Arizona on indigenous communities
•Potential Regulatory Solutions and Strategies to promote Southern Indigenous Rights and Justice.
at November 18, 2010 No comments: