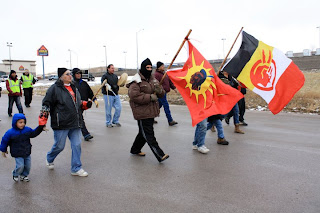 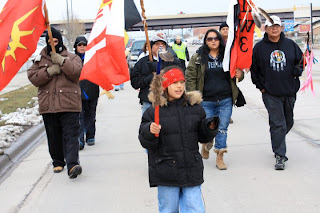 The Longest Walk north is in South Dakota, and the southern route is in Hereford, Texas today, Tuesday, enroute to Amarillo, Texas.
More photos and Pine Ridge schedule of events, including a horseback ride, at: http://bsnorrell.blogspot.com/2011/03/long-walk-3-south-dakota-north-and.html
Congratulations to our friend Marsh Rice from the Longest Walk in 2008 and wife Manna, happy parents of a new baby girl born in Tokyo. "Aurora Makena entered this world at 9:30pm Tokyo time," Marsh said on Monday.

US allowed weapons across border, found at Border Agent's murder in Arizona

The US Deadly Games: Arizona border agents, weapons and oil The US says it is taking the lead in exploiting Kazakhstan's rich oil reserves. The US even has the Arizona National Guard over there keeping them safe by way of Centcom. Arizona got a chunk of money to keep things safe and tidy for ExxonMobil, Chevron, and ConocoPhillips in Kazakhstan, according to a US cable released by Wikileaks: http://www.wikileaks.ch/cable/2010/02/10ASTANA251.html

ATF gunwalker scandal … did US Customs and Border Protection look the other way when the guns were headed south?
by Hugh Holub on Mar. 25, 2011 Tucson Citizen

The ATF “gunwalker” scandal … where federal ATF agents allowed hundreds of guns to “walk” from US gun shops across the border into the hands of the Mexican drug cartel as part of some dubious investigation into gunrunning gets even more outrageous. Two of the ATF “walked” guns ended up at the murder scene of Border Patrol Agent Brian Terry near Rio Rico.
Read more ... http://tucsoncitizen.com/view-from-baja-arizona/2011/03/25/atf-gunwalker-scandal-did-us-customs-and-border-protection-look-the-other-way-when-the-guns-were-headed-south
at March 28, 2011 No comments: 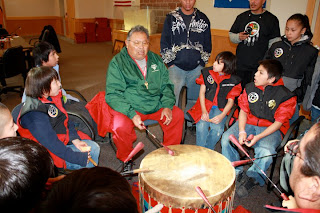 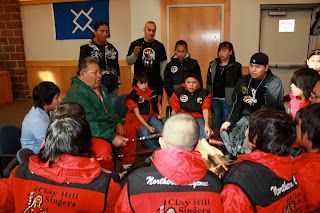 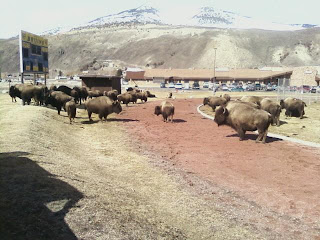 Photos 1 and 2: Paul Owns the Sabre on the Long Walk northern route with Northern Cheyenne youths in Lame Deer, Montana. Photo by Long Walk northern route. Photo 3: Long walkers prayed for the buffalo in Gardiner, Montana. Photo by Carl Bad Bear Sampson.
Long Walk northern route in South Dakota, southern route heads for Amarillo, Texas
By Censored News
http://www.bsnorrell.blogspot.com
Northern Route: Monday, March 28, 2011
Update Sunday night, "Had a good sweat near the Badlands SD. Thank you Autumn Two Bulls for inviting us and praying with us. Special thanks to the Heyoka medicine man that prayed for the LWNR3. Bringing harmony back to our spirits. Tomorrow we walk into Rapid City. We'll keep you posted. Chris Francisco."
OGLALA TERRITORY hosts The Longest Walk 3 Northern Route 2011! REVERSING DIABETES March 31st through April 2nd 2011
http://earthbornproductions.com/LWNR3__Events.html
Events are Tentative and Subject to Change, but here is what we are planning! March 31st 2011 Enter at Red Shirt Rez & State Line (time to be determined as they draw closer) PRHS Cross Country & Track Team to RELIEVE them. They will run them into Pine Ridge by RELAY (other schools to participate upon confirmation) ESCORT : OST DPS March 31st 2011 (continued) Share a meal together at Billy Mills hall (time to be determined as they draw closer). Longest Walk 3 Northern Route Walkers will stay at PR RETREAT CENTER April 1, 2011 10AM Circle Up at 4-Way in Pine Ridge for PRAYER and Words of Encouragement by TBA 10:30AM ~ Sobriety Walk & Ride against DIABETES to White Clay, NE in honor of Longest Walk 3 Northern Route Walkers ESCORT : OST DPS LUNCH – between 12 ~ 1PM – LUNCH (will be served at Billy Mills Hall) Activities to proceed throughout the day at SACRED HEART (Diabetes Screening, Diabetes Education, Diabetes Prevention, Songs, Dance, Healthy Food, Socializing)
April 2, 2011 8AM Riders and Walkers Circle up at 4 – Way for Prayer and Words of Encouragement by TBA 8:30AM ~ Longest Walk 3 Northern Route Walkers will begin their HORSE RIDE! (Oglala Horse Owners will RELIEVE them by horseback as they trek EAST to the next NATION: Sicangu) ******ALL RIDERS ENCOURAGED TO COME AND RIDE ALONG***** ~ LUNCH~ SERVED @ BATESLAND ~ DINNER~ SERVED @ MARTIN OST DPS will be providing an ESCORT
Long Walk 3 southern route:
Update from Goodie: Walkers spent the night of March 25 in a little school in a railroad town called Vaughn, New Mexico, population of 539. On March 26 the Longest Walkers walked to Summer Lake State park where they will spend the night and also take a rest day on March 27. On Monday, March 28, they will head out toward Amarillo, Texas, and may make one stop enroute. When they arrive in Amarillo, Texas, the walkers plan to stay the the Kwahadi Museum http://www.kwahadi.com/ near the Amarillo Airport for two days -- Tuesday, March 29 and Wednesday, March 30. Next stops after that will be March 31 and April 1 in Hammond Oklahoma, then on to Canton, Oklahoma. --Goodie
Monday, March 28: South Route Longest Walkers will spend the night in Hereford, Texas, and on Tuesday March 29, will precede on to the Kwahadi Museum in Amarillo, Texas where they will stay through Wednesday March 30.
at March 28, 2011 1 comment: