Censored News' Person of the Year: The Indigenous Woman

Censored News Person of the Year: The Indigenous Woman 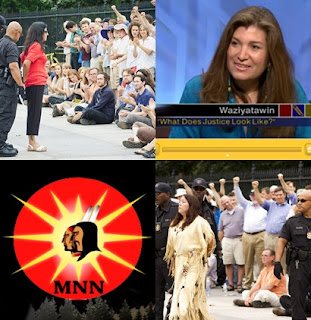 Who made a difference this year?

Debra White Plume, Lakota grandmother and longtime activist from Pine Ridge, S.D., received the most nominations. Shown in the top left photo, White Plume, grandmother and voice against uranium mining on Lakota lands, was among those arrested this year at the White House during the action to halt the Tarsands and Keystone XL dirty oil pipeline during September.

Gwen Caldwell said that Debra White Plume was her top choice. "I selected Debra, because she sets an excellent example of what we as women should be doing and how we should be living. She is humble courageous, speaks her truth with honor and integrity!"

CJ Christian said, "Debra White Plume has made herself visible before the UN, fighting to save the Black Hills and to stop the Keystone pipeline. She works tirelessly for the First Nations People with sincere devotion, dedication, spirituality and integrity."

Roxann said, “I nominated Ojistoh because she delivers our babies. Being a matrilineal society she is responsible and takes a hands on role in the delivery of the mothers of our nation." She added, "That woman does not sleep. She does house calls and even looks after people during family events on her time off! I love that beautiful woman. She’s an inspiration and deserves it!”

"Kahentinetha is a woman who always worked for our people! I am honored to say I know these lovely ladies personally.”

Manuel was among many who selected Dakota activist Waziyata Win for her work to bring Indigenous perspectives to the Decolonize/Occupy movement. (Shown in top right photo. Click for Oakland video.)

Among the dynamic Native American youths honored was Kandi Mossett, who hosted the Indigenous Environmental Network annual gathering in her homeland this summer, was arrested at the White House protesting the Tarsands Keystone XL pipeline in September, and was featured as a voice to protect Mother Earth at COP 17 in Durban, South Africa, in December.

Hahana Bear selected Kandi, shown in lower left photo at top of page. Kandi was compelled to speak out after the deaths of friends and family from the oil and gas trucks, and devastating pollution, on her homeland, the Mandan, Hidatsa and Arikara Nations in North Dakota, also known as Three Affiliated Tribes and Fort Berthold.

Nolan said, “I selected Dr. Katherine Siva Sauvel, Cahuilla elder. elder, teacher and Cahuilla culture bearer (1920-2011) because she has been instrumental in saving the endangered Cahuilla language and way of life, and dedicated her life to passing along the oral histories and language and culture of the Cahuilla into the modern world. She was the first American Indian inducted into the National Women's Hall of Fame, and is a co-founder of the Malki Museum, the first American Indian museum in the United States.

“I had the incredible honor and good fortune to have met and learned much from Dr. Sauvel through my California desert Indian scholarship and position at College of the Desert, and was and remain incredibly touched, professionally and personally, by her extreme generosity and gentle yet strong touch in all matters related to sharing with so many others her native culture, to which she dedicated her passion and life's work. She is deeply appreciated by people across the country and globe, and truly missed.”

Toni Reynolds selected Cheyenne Bellecourt Eagleman. “She tells it like it is. She doesn't care if people get upset with her or not. She fights for Native rights, works with young people, raises her own children as a single parent, and works with numerous other issues. She is very respected and well known.”

Richard Flittie honored Pte San Win. "She is a young Lakota woman who lives on the Pine Ridge Reservation and works hard to take care of all the people there who need help. She is raising money for propane and for firewood and continues in her fathers footsteps on the political front for the Lakota people.Things like the Keystone XL pipeline. And she is always supporting and encouraging the carrying on of tradition and ceremony for her people."


Jeanne Combo selected Wangari Muta Maathai, who passed away in September of this year. She started the Green Belt Movement in Africa in 1977. She was honored for working with women to improve their livelihoods by increasing their access to resources like firewood for cooking and clean water. "She became a great advocate for better management of natural resources and for sustainability, equity, and justice."

Becka Nan Amos selected Hacha C. Norris. “Hacha is a strong and fearless woman who has taken her own education seriously -- and by this I mean learning truths and concepts the overculture has tried to hide and/or eradicate. She understands deeply the wrongness of the overculture and speaks out about it regularly with her actions as well as her words. I have learned so much from her, especially concerning my own white privilege -- and that's what I respect the most about her -- she's not afraid to call out people on the ways of thinking that we so badly need to change but often cannot even see. She's got guts, and not the greedy kind.”

Bertha Gutierrez thanked Hacha C. Norris for selecting her. "I am humbled. All the people you have mentioned are people who inspire me and in no way shape or form do I feel I could fit in their shoes. Thank you for also inspiring me. Mi respeto para ti."

The women of the Blood Reserve are honored who faced off with oil and gas trucks this year in Alberta, Canada. On the southern border, O'odham Ofelia Rivas, and O'odham struggling against border agents and repression are honored. Northern Paiute traditional gatherer Wesley Dick, Kwassuh, is honored for refusing to accept the charges of Nevada Fish and Wildlife, and demanding justice. The longstanding efforts of Western Shoshone Carrie and Mary Dann are also recognized for their decades of struggle for the land and people. Lakotas Kent Lebsock, Debra White Plume and Alex White Plume, are honored for the Owe Aku International Justice Project.

The Navajo and Hopi of Black Mesa are honored who work together in their struggle to protect the land, air and water. Navajo Louise Benally and Ofelia Rivas, O'odham, are honored for speaking out at protests in December against the corporate profiteers, now coopting Arizona legislators, the American Legislative Exchange Council (ALEC) in Phoenix. All of the Akwesasne Mohawks and Lakotas at Rosebud and Pine Ridge are honored for working together to bring warm clothes and blankets to the people.

Native Environmental Activists and the Year of Struggle

Bolivian President Evo Morales and the tireless activists at the Indigenous Environmental Network and Native activists at Protect San Francisco Peaks actions also topped the list of nominations. President Morales welcomed Indigenous Peoples from around the world to Cochabamba, Bolivia, last year for the World Peoples Conference on Climate Change and the Rights of Mother Earth.

Allison Hedge Coke selected President Morales this year “for valuing the right of the earth to live an to be protected, for continuing to create laws that affirm natural life, the planet. For being the son and uncle of his people, when need be. No question.”

This year, IEN was part of the civil disobedience and arrest to halt the Keystone XL pipeline at the White House and were among the voices for Mother Earth at the UN Climate Summit COP 17 in South Africa. IEN held its annual gathering on the Mandan, Hidatsa and Arikara Nation in North Dakota, which is being devastated by oil and gas drilling. Photographer Ben Powless and IEN's Clayton Thomas Muller and Marty Cobenais are also honored for their tireless efforts for Mother Earth.

Klee Benally, longtime Navajo activist, was among the men and women who locked down to heavy machinery to halt the Snowbowl and desecration on sacred San Francisco Peaks in Arizona. Benally is also a musician in Navajo family band Blackfire and media activist at Indigenous Action Media in Flagstaff, Arizona. The action to lock down to heavy machinery to halt the destruction of the old growth pines on San Francisco Peaks, for the Snowbowl ski resort and the planned snowmaking from sewage water, was the top story, most accessed, at Censored News in 2011. San Francisco Peaks is sacred to 13 area Indian Nations and a place where medicine men gather healing plants and carry out healing ceremonies.

Sue Green selected Klee Benally. “A true grassroots hero that tirelessly works to protect the Sacred Peaks. His spirit has changed so many lives and continues to inspire indigenous youth through his example.”

Amber Cheschilly selected a Dine' teacher. "Mr. Alfred Yazzie, my Navajo Culture and Heritage instructor at Mesa Community College! He definitely made me extra proud to be an American Indian."

Vicki Black sent a message of thanks to "all the Tribal College Students who took the time to talk with me about their college experiences -- my gratitude is deep."

Christine Karatnytsky said, "The Amazigh people of Libya have been inspirational."

Wayne Allcorn Bannatyne said, "Attawapiskat, all of them."

Kathryn Price NicDha na nominated Ryan Red Corn, Dallas Goldtooth, Miqizi Pensoneau and the strong, beautiful women who worked with them and the other 1491s to make their public service announcements about domestic violence.

Nancy Pontius, in Tucson, thanked Jose Matus, Yaqui ceremonial leader and director of Indigenous Alliance without Borders. "Jose Matus, helped me with a prayer, a lot of people, always inspired by Leonard Peltier. Always Joy Harjo, John Trudell, Leslie Marmon Silko, great thinkers and writers, many friends who have really been there for me in hard times, too many to list, I am grateful." She also selected the Leonard Peltier Offense Defense Committee.

Ben Manuel "Santi Hitorangi of Rapa Nui. All of the people of Occupied Palestine. Whose every breath is an exercise of Human Rights."

Tucson reporter ‎David Abie Morales, the voice of Three Sonorans at Tucson Citizen, was recognized for his struggle against Arizona racism and for ethnic studies. Morales was nominated by Cassandra De La Serna.

Please feel free to repost this article and photo, with author and Censored News credits appearing at top of the article. Media, for contact info for interviews of the heroes: brendanorrell@gmail.com
at December 15, 2011 1 comment: