Native America Calling will host the most censored Native American newsmakers of 2011 on Friday, Dec. 30. Guests will include the Censored News Person of the Year: The Indigenous Woman.
Debra White Plume, Lakota from Pine Ridge, S.D., who fought the Tarsands Keystone XL pipeline this year, will be among the guests on the live radio show hosted by Harlan McKosato, Sac and Fox. White Plume, activist and grandmother, was among those arrested at the White House in September and also fights uranium mining on Lakota lands.
Klee Benally, Navajo, is also a featured guest. The protests to protect sacred San Francisco Peaks in Arizona, and the lockdowns to heavy equipment, were the most accessed articles at Censored News in 2011. Native photographers, Youths of the Peaks, provided Censored News with photos of the lockdowns and protests as those happened.
The Indigenous Environmental Network is also invited to join the live radio program. IEN members were arrested at the White House protesting the Keystone XL pipeline. IEN activists were a voice for the Protection of Mother Earth, and against bogus carbon credits, at the UN Climate Summit in Durban, South Africa.
Two of those IEN newsmakers are Native American youths: Kandi Mossett, who hosted the IEN conference in her homeland at the Mandan, Hidatsa and Arikara Nations in North Dakota; and Mohawk photographer Ben Powless.
Powless and Youths of the Peaks were honored as Censored News photographers of the year.
Native American women continue to take the lead in their home communities in the struggle for justice, from Ofelia Rivas, on O'odham lands, to Louise Benally at Big Mountain on Navajoland, to Kahentinetha Horn, publisher of Mohawk Nation News.
In the news this year, Wikileaks exposed US spying on Indigenous Peoples from Mapuche in South America to the Mohawks in Canada.
Further, Wikileaks exposed the role of the US in promoting mining while Indigenous Peoples were dying to protect their lands in Peru. Both Venezuelan President Hugo Chavez and Bolivian President Evo Morales were targets of US State Department spying.
In the US, hacktivists Anonymous exposed Arizona police files revealing white supremacists and off duty Marines patrolling the Arizona border with assault weapons. Meanwhile, the militarization of the border continues, with drones overhead, and Border Patrol agents abusing Indian people in their homelands.
In the original, breaking news category, Censored News published a diagram of the new $1.5 billion spy towers being planned for the Tohono O'odham Nation, following the boondoggle of the previous $1 billion spy towers on the Arizona border that didn't work.
Censored News also published an Attorney General report showing that Project Gunrunner began in 2005 in Texas under the Bush administration. An ATF brochure of assault weapons of Project Gunrunner in 2008 that were allowed to "walk" to drug cartels in Mexico, was also published. It was exposed when Lulzsec hacked the Arizona police files.
The US/Mexico border series at Censored News followed the Protect the Peaks articles and was the second most accessed group of articles this year.
Throughout Indigenous lands in the Americas, Indian people continue to fight the environmental genocide of coal-fired power plants, uranium mining, silver and gold mining, and oil and gas drilling. Wikaritari (Huicholes) battle silver mining on their sacred lands in Mexico. On the Blood Reserve in Canada, women stood in front of oil and gas trucks to stop the destruction.
Throughout Indian lands, the battle continues for clean drinking water, the protection of the aquifers and to halt the theft of Indian water rights.
In the US, Northern Paiute Wesley Dick, Kwassuh, led a battle against the Nevada Game and Fish Department and won, after he was charged while gathering (tules) cattails for traditional crafts.
In Phoenix in November, Navajo and O'odham led protests against ALEC, the American Legislative Exchange Council, corporate profiteers coopting the state legislature. Private prison profiteers, who pack their jails with migrants, American Indians and other people of color, are among them.
The ALEC protests included an action at the Salt River Project, which operates one of the Navajo Nation's three coal-fired power plants. The protesters were pepper sprayed by police at the Scottsdale resort where the conference was held. O'odham veteran David Ortega was hospitalized.
Racism continued, from violent beatings of Indian people by white supremacists, to the censorship of their voices in the newsrooms.
Join us on Friday, Dec. 30, 2011. Listen online at http://www.nativeamericacalling.com
1 pm Eastern; noon Central; 11 am Mountain; 10 am Pacific.

Brenda Norrell has been a reporter in Indian country for 29 years. During the 18 years that she lived on the Navajo Nation, she reported for Navajo Times, AP and USA Today. After serving as a longtime staff reporter for Indian Country Today, she was censored, then terminated, and created Censored News, now in its fifth year.
.
at December 28, 2011 No comments:

Photos Tucson Postal Workers March to Save Their Jobs 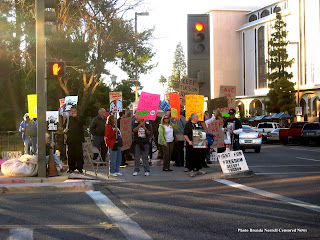 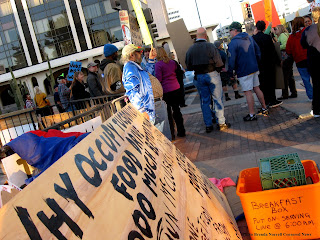 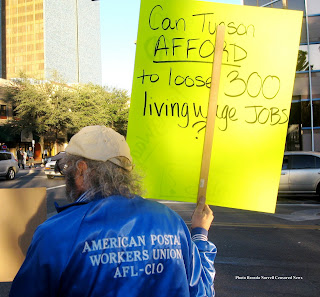 Photos by Brenda Norrell/Censored News
Postal workers in Tucson marched in downtown Tucson to save their jobs this evening. Protesting the announced closure of the Tucson mail processing plant, postal workers joined Occupy Tucson members and Veterans for Peace during the march. There is now a hearing underway: 6pm - Public hearing on the closure of the Tucson Mail Processing Plant at Leo Rich Theater in downtown Tucson.
(News media may use these photos/Credit Censored News)
at December 28, 2011 No comments: 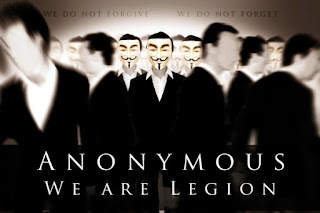 Dear Citizens of the world,
We live in the most troubled times! Ravaged by debt, enslaved by greed, and trapped by media lies! Our lives have become such a burden, that we forgo the very basic instincts of our being - to care for our fellow brothers and sisters, We must dare to speak out in support of the Palestinian people who resist and endorse the horrific existence brought upon them through our blood thirsty imperial crusade.

The people of Palestine wake up in fear everyday knowing it may be their last; they walk the streets with military tanks aiming at them, they have to go through military checkpoints every day just to get to school or work, they are denied their basic human rights, they are shot at from point blank range for peacefully protesting, innocent Palestinian children are used as human shields by the Zionist IDF soldiers.

We at Anonymous and TeaMp0isoN would like you to take a few minutes out from your busy lives and just imagine the following existence for you, your family or those you hold dear:

Imagine you wake up with no hope every day, imagine your very existence, the future of your children, even the future of your nation was decided by the bullets of an occupying force! Imagine your children growing up accepting death as an inevitable consequence of being who they are! Imagine accepting the indignity of being searched, denied the freedom of movement in your own country; imagine having to queue up at a check point with a terminally or fatally wounded child only to be told that a non medic has decided that you cannot pass, imagine having to take your child back home to watch them die knowing that there is nothing you can do! Imagine watching an illegal settler forcing you and your family from your home, imagine the authorities aiding them, imagine your children watching their children playing in the back yard - with their toys, imagine you having to live outside in a tent watching them redevelop your home! Imagine what you would say to your child when he/she asks why!

Imagine seeing F16's terrorise your children, imagine being unable to sleep, traumatised, scared, crying - imagine this happening every day! Imagine bombs tearing the limbs of your children, imagine seeing 1, 2, 3, 4 or more of your children laid out on the floor looking at you, fear stuck on their face, lifeless, not breathing, some seeming at peace, others ravaged by shrapnel, eyes missing, hands burnt, intestines slowly sliding out of an open wound, head missing, bits of their skull missing, imagine seeing your child in hospital screaming, crying, suffering, looking at you with pleading eyes, begging eyes to help take the pain away, imagine knowing there is nothing you can do because illegal weaponry like white phosphorus was cooking their insides.

just imagine what you would do!

that is EXACTLY what you are doing when you drink Coca Cola, eat a Big Mac or buy pampers for your baby and do you know about the other everyday Israeli products you purchase from which the profits gained are used to fund the suffering of the palestinian people. Do you realize the taxes that you pay feed the forces that traumatize the people of Palestine, Of course not you're more worried about not having free health care.

The people of Palestine have been robbed of their land and their freedom, the Racist Zionist state is killing innocent Palestinians using illegal chemical weapons, the governments of the world have ignored the war crimes committed by Israel, will you ignore these illegal methods and war crimes too?

Israel has been committing genocide, infanticide, and every day homicide since 1948 and the world and her citizens have been aiding and abetting and financing this! We are all complicit in the murder of the innocent! It's time to make a stand!

Anonymous, TeaMp0isoN and many other hacktivists from around the world have united, we may not be able to stop the Zionist regime, but the least we can do is raise awareness and educate people by defacing zionist websites, Operation Free Palestine is about educating the blind and terrorising the terrorist, the tables have turned, the time has come

We do not forgive.

We do not forget,

Dakotas ride for the ancestors to Mankato 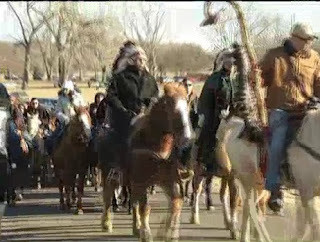 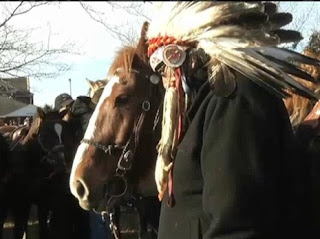 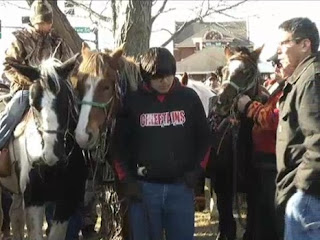 149 years ago today 38 Dakota Indians were hung in Mankato.
It's a dark day in history but a group of American Indians are hoping to change that with a tradition that's about forgiveness.
The 330-mile ride started in South Dakota and ends here in Mankato, the site of the largest mass execution in America's history.
Miller says, "In the dream I see 38 of my ancestors being hung. The dream and I know that it came from the creator so I acted on it."
From Jim Miller's dream this ride was born... over 8 years ago.
Miller says, "our main goal is to do reconciliation."
Although the death of their ancestors is a difficult thing to accept they hope the ride helps with that reconciliation.
Peter Lengkeek says, "Those things that we felt take them use them in a GOOD WAY."
READ ARTICLE AND WATCH VIDEO:
http://www.keyc.tv/story/16395095/dakota-indians-ride-for-thier-ancestors-almost-150-years-later
at December 28, 2011 No comments: