Lakotas to celebrate purchase of Pe' Sla on Wednesday, Sept. 5, 2012

Chase Iron Eyes: "We are still fundraising towards the closing amount. Whatever we fundraise, the Sioux Tribes won't be forced to borrow, towards the total price of the land. The land deal does not close until November 30, 2012."

"We are sti
Press statement
Posted at Censored News
http://www.bsnorrell.blogspot.com

At a press conference in Eagle Butte, South Dakota on Saturday, Lakota leaders of the movement to secure the Lakota pilgrimage site Pe’ Sla for the Sioux Nation announced that the tribes will purchase the 2,000 acres of sacred land in the Black Hills. After several weeks of intense fundraising, the nine tribes raised enough to make a deal with the current owners of Pe’ Sla, Leonard and Margaret Reynolds—though details of the arrangement are still being negotiated. The fundraising effort on the part of the Sioux tribes was begun by Attorney Chase Iron Eyes, and the negotiations were carried out in part by Cheyenne River Tribal Councilwoman Robin Lebeau. Both leaders spoke on Saturday. Saturday’s action was organized by Last Real Indians and the Lakota People’s Law Project, two organizations operating in South Dakota that support the return of the Black Hills to the Sioux.


Saturday’s action was organized by Last Real Indians and the Lakota People’s Law Project, two organizations operating in South Dakota that support the return of the Black Hills to the Sioux. 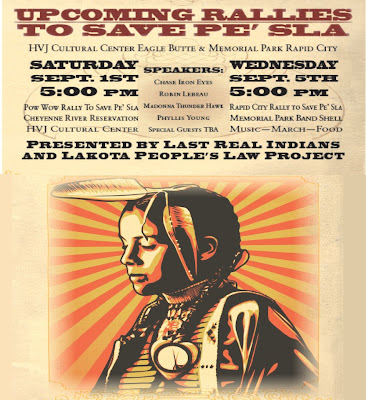 Chase Iron Eyes described the process by which his organization, Last Real Indians, conducted a fundraising effort to save Pe’ Sla, raising $300,000. This sum was combined with $1.3 million put forth by the Rosebud Sioux tribe, enough to seal the land deal.
Iron Eyes said this is earnest money toward the purchase of Reynold's Prairie (Pe' Sla). "We are still fundraising towards the closing amount. Whatever we fundraise, the Sioux Tribes won't be forced to borrow, towards the total price of the land. The land deal does not close until November 30, 2012."

Iron Eyes, an attorney in his mid thirties, discussed the teachings concerning the Black Hills that he received from his elders a a youth: “Its back, we’re talking about the Black Hills again, and it’s the right time for it to happen.”
Councilwoman Lebeau, also under forty, described the complicated negotiations by which the tribes acquired the land. She implored the tribes to come together: “What I want to stress is unity. All I am asking for you (Sioux) to do is to take (the idea of Pe’ Sla) back to who whomever your spiritual leaders are—your treaty councils, your IRAs—and let’s come together.”
Madonna Thunder Hawk talked of the importance of land possession to Sioux identity, saying, “The land the priceless. The land is who we are. That’s why we still are who we are, because we have a land base. It doesn’t matter how much money the tribes have to put up for Pe’ Sla. We have to have it.” Councilwoman Young, who participated in the conference calls during which the land deal occurred, thanked both her fellow Sioux negotiators and the Reynolds family for obliging Sioux appeals.
“As we continue to renew our belief systems and ceremonies, we urge our people to continue as human beings to contribute and share our lifesystems with the world so that Pe’ Sla becomes a universal symbol of peace everywhere.”
Former tribal chairman Brings Plenty discussed the Sioux struggle for self-empowerment and the role that land plays in it. “This Pe’ Sla movement, it is a victory.”

The organizers of Saturday’s press conference are holding a rally in Rapid City this Wednesday, September 5, to celebrate the purchase of Pe’ Sla. It will be at the Memorial Park Band Shell at 5 pm.
Thunder Hawk, Iron Eyes, Lebeau, Young, and Huey invite interviews from journalists. To reach Thunder Hawk, Lebeau, Young, or Huey please use DanielPaul@LakotaLaw.org or 831-406-0349. For Iron Eyes use ChaseIronEyes@LastRealIndians.com.
For updates about the upcoming events see Facebook.com/LakotaPeoplesLawProject and www.LastRealIndians.com
at September 03, 2012 1 comment: