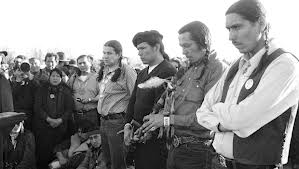 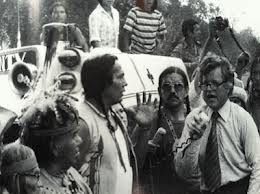 PORCUPINE, S.D. -- The family of Russell Means invites you to join us in the “2nd Honoring - The Life of Russell Means”.  The honoring will highlight his life, leadership and the eternal fire that he re-ignited throughout Indian Country.  This Honoring is being held in conjunction with the 40th Anniversary of the Wounded Knee ’73 Occupation.
February 27, 2013, doors open at 4:00 p.m. MST, at Pine Ridge School “old gym” (west side of campus), South Dakota USA, on the Pine Ridge Indian Reservation.  Dinner will be served at the Pine Ridge School Cafeteria at 5:00 p.m.  Honoring will begin at 6:00 p.m. at the old gym and will include guest speakers, including relatives, Wounded Knee Veterans and visiting dignitaries.  Chris Eagle Hawk (Oglala Lakota) will be the Eyapaha (announcer), along with the Creekside Singers as the honor drum.  Scotti Clifford (Oglala Lakota) of “Scatter Their Own” will perform an honor song.  The Means family is sponsoring a traditional giveaway at this Honoring.
Russell Means, a self-described “Oglala Freedom Fighter”, began his journey to the spirit world on October 22, 2012 at 4:44 am, with the Morning Star, at his home and ranch in Porcupine.
This Honoring will be the second of four opportunities for the people to honor his life.  The next two Honoring’s are tentatively scheduled as follows:  3rd Honoring at Wind Cave State Park, SD (June 2013); 4th Honoring on Russell’s birthday (Nov 6-10, 2013) in Denver, CO.
The family is encouraging monetary contributions to advance the visionary work of Russell Means.  Donations can be sent to:
TREATY Total Immersion Educational Endowment Fund
Administrative Office
P.O. Box 110
San José, NM 87565
Paypal contributions can be made at: www.treatyschool.org