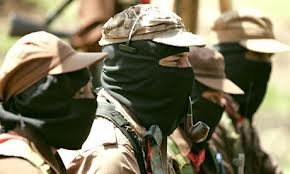 Them and Us Part VI: Gazes, Second Part: Gazing and Listening From/Towards Below by Subcomandante Marcos

2.-Gaze and listen from/towards below.

Can we still choose towards where and from where to look?

Can we, for example, choose between looking at those who work at the supermarket chain store, ream out the workers for being complicit in the electoral fraud[1], and publicly ridicule the orange uniforms the employees are forced to wear, or look at the employee who, after cashing out…?

/The cashier goes and takes off her orange apron, grumbling with anger over how they reamed her out for being complicit in the fraud that brought ignorance and frivolousness to Power.  She, a woman, young or mature or mother or single or divorced or widow or single mother or expecting or without children or whatever, who goes to work at 7 in the morning and leaves at 4 in the afternoon, of course, if there isn't overtime, and not counting the time between home and work and back again, and after giving school or work the "work-suitable-for-her-sex-that-can-be-completed-with-a-little-bit-of-flirtation," she read in one of the magazines that are next to the register one day when there weren't many customers.  To her, whom those are supposedly going to save, it's nothing more than a question of a vote and done, ta-da, happiness.  "Do you really think the owners wear an orange apron?" she irritatedly murmurs.  She fixes herself up a bit from the purposeful untidiness with which she goes to work so that the manager doesn't bother her.  She leaves.  Outside her partner is waiting.  They embrace, kiss, touch each other with their gazes, they walk.  They enter a cyber cafe or whatever you call it.  10 pesos per hour, 5 pesos for a half-hour.../

"Half hour," they say, mentally calculating the budget-time-from-the-metro-bus-walk.

"Ok, but come by on payday, because if not, the owner will be all over me and you'll be the one who will be spotting me money."

"Ok, but it'll be when you get a cell phone, dude, because I'm working at a car wash."

The three of them laugh.

He goes to enter a number.

"They're bourgeois," he says.

"Settle down, revolutionary vanguard.  You've got something wrong with your head if you judge people by their appearances.  Just because I have light skin they call me güerita and bourgeois, and they don't see that I live paycheck-to-paycheck.  It's important to see each person's history and what they do, dummy," she says, smacking him upside the head.

They watch, they shut up, they listen.

"So they told Peña Nieto all that to his face… they're brave, yes, it's obvious they've got balls," he says.

"Or ovaries, idiot," and another smack from her for him.

"Watch out, my queen, I'm going to accuse you of inter-familial violence."

"It would be gender violence, idiot," and another smack.

They finish watching the video.

Him: "So that's how things start, with a few people who aren't afraid."

Her: "Or they are afraid, but they get it under control."

"Half an hour!" Roco yells at them.

"And now what are you laughing about?"

"Nothing, I was remembering," she gets closer to him, "what you said about 'inter-familial.'  Do you mean that you want us to be a family?"

He doesn't miss a beat:

"That's right, my queen, later is late, we're already getting there, but without so many smacks, kisses instead, and more below and to the left."

"Hey, don't talk dirty to me, dude!" another smack.  "And enough of 'my queen,' aren't we against fucking monarchy?"

Him, before the strong smack: "Well, yes my… plebeian."

She laughs, him too.  After a couple of steps, she says:

"And do you think the Zapatistas will invite us?"

"Of course, Vins is my buddy and he said that he's tight with sockface because he let him win at Mortal Kombat, on the little machines, so all we have to do is say that we're friends with Vins and done," he argues enthusiastically.

"And do you think I'll be able to bring my mom?  She's already pretty old…"

"Of course, speaking of witches, if I'm lucky my future mother-in-law will get stuck in the mud," he ducks his head expecting a smack that doesn't come.

"And what the hell are the Zapatistas going to give us if they're so far away?  Do you really think they're going to give me a raise, make people respect me, make it so fucking men don't look at my butt on the street, and that the fucking boss stops looking for excuses to touch me?  Are they going to give me money so I can make rent, so I can buy clothing for my daughter, my son?  Are they going to lower the price of sugar, beans, rice, oil?  Are they going to put food on my table?  Will they stand up to the cop that comes around everyday to bother and demand money from the people in the neighborhood who sell pirated discs saying that it's so they don't report them to Mr. or Mrs. Sony…?"

"It's not 'pirate,' it's 'alternative production,' my quee….my plebeian.  And don't get all huffy with me because we're in the same boat."

But she's already on a roll, so no one can stop her:

"And you, are they going to give you back your job at the plant, where you were qualified as a who-the-hell-knows-what?  Are they going to validate your classes, the training courses, and all that so that the asshole of a boss takes the company to I don't know where, and the union and the strike, everything that you did, to later end up washing cars?  Or like your brother, El Chompis, whose work they took away and they disappeared the company so that he can't defend himself and the government with its same old babble that it's to improve service and world class and blah blah blah and did they really lower the rates, no, they're more expensive, and the fucking lights go out all the time[3] and fucking Calderón goes to shamelessly teach classes to gringos[4], who are the masters of all this shit.  And my Dad, may he rest in peace, who went to work on the other side [of the US-Mexico border], not to do the tourist thing, but to make money, dough, moolah, to take care of us when we were younger and there crossing the line the migra came down on him as if he were a terrorist and not an honorable worker and they didn't even give us his body and that fucking Obama, it seems as though his heart is the color of the dollar."

"Damn, stop your car and pull over, my plebeian."

"It's just that every time I think about it I get mad, working so much so that in the end those above keep everything, the only thing that's left to privatize is laughter, although I doubt they'd privatize that, because there's not much, but tears, yes, there's an abundance of those and they get rich… richer.  And then you come along with your stuff about the Zapatistas here and Zapatistas there, and below and to the left and the eighth…"

"The Sixth, not the eighth," he interrupts.

"Whatever, those dudes are far away and they speak Spanish worse than you."

She wipes away her tears and murmurs: "Fucking rain, it ruined my esteelauder, and I'd fixed myself up all nice for you."

"Boyeeeee, I like you even better with nothing on."

Her, very serious: "Ok now, let's see, tell me, are those Zapatistas going to save us?"

"No, my plebeian, they aren't going to save us.  That and other things we have to do for ourselves."

"What are they going to teach us?"

She remains silent for a moment.  Then:

The collective van looks like it's going to explode with people.  We'll see if the next one has room.

It's cold, it's raining.  They embrace each other more, not so that they don't get wet, but rather so they get wet together.

Far away someone is waiting, there's always someone who is waiting.  And while he waits, with an old pencil case and an old and shabby notebook, he keeps track of the gazes from below that are seen in a window.

From any corner of any world.


Translated from the original Spanish by Kristin Bricker.