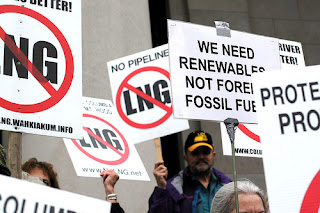 
This is a NO LNG meeting in the Pacific Northwest, in Astoria Oregon, just across Columbia River (and the bridge) from Washington. This meeting is about stopping the Export LNG plant called "Oregon LNG" that will be at the mouth of SKIPANON RIVER River, where it flows into the YOUNGS BAY RIVER, which connects with the COLUMBIA RIVER a short distance away.
As having the huge tankers that carry the LNG coming in and out of the COLUMBIA RIVER over the very dangerous COLUMBIA RIVER bar, and no other ships are allowed near such vessel, this will impact folks who fish, the ability to take fishing or other vessels out when they want.


There would also be discharges of heated water from the plant into the river (via the Warrenton Sewage Plant); discharges of ballast water, and risks related to towers of LNG gas and treatments to separate other chemicals. Burning of those will impact the environment.
If this EXPORT LNG plant comes to pass it will increase costs and the rates citizens pay for use of LNG in the U.S. and perhaps beyond into Canada, as those buying the LNG are willing to pay many times more what we pay for LNG. Lands, land rights, and waterways will be impacted by pipelines to provide LNG gas to be EXPORTED and as I understand it, not for use by Oregonians.
Native Americans are encouraged to come to the NO LNG meeting below to learn how they can help stop this EXPORT LNG plant in Warrenton or elsewhere on the Columbia River.


Now that exporting LNG is a national issue, it's especially important that all NO LNGers continue our active LOCAL opposition to Oregon LNG.  Come to this North Coast NO LNG meeting to get the latest updates and decide our next steps.

How would Warrenton and Hammond residents and businesses - and traffic - be affected?
What is OR LNG telling the federal, state and local officials that the "export" terminal would look like?
What's going on in the courts, the Oregon legislature, and Governor Kitzhaber's mind?
What about the US Coast Guard?
What could be the impact of Tuesday's hearing by Senator Wyden and the Senate Committee on Energy & Natural Resources?
What is Climate Convergence, and why might it be in Clatsop County this summer?
Dan Serres, Conservation Director of Columbia Riverkeeper (CRK), will provide legal updates and other news from LNG-land.  Whether you've been active or are new to NO LNG, please attend and check out how you can make a difference.

Pick up your new NO LNG yard sign and NO LNG buttons at the meeting.
With your help, we will defeat Oregon LNG!