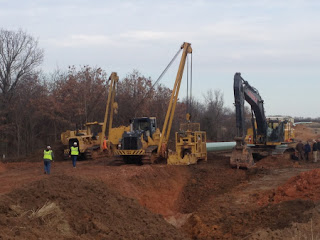 By Great Plains Tarsands Resistance
Early this morning Norman, Oklahoma resident Elizabeth Leja locked her neck to equipment used in constructing the Keystone XL pipeline. Citing concerns for Oklahoma’s waterways, and their importance for the health of future generations, her actions have halted construction at the site on Highway 62, just North of the North Canadian River, for the day. The Gulf Coast segment is being actively constructed in Oklahoma and Texas, despite objections by impacted communities.
MORE http://gptarsandsresistance.wordpress.com/2013/02/04/breaking-oklahoma-woman-locks-her-neck-to-keystone-xl-construction-equipment/
Posted by Censored News, publisher Brenda Norrell at February 04, 2013