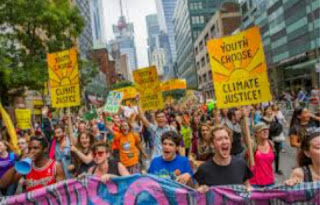 Friends,
Yesterday, we got some disappointing news. Citing security concerns, the French government has prohibited many of the Paris mobilizations and events connected to the upcoming climate summit from going forward -- including the massive march being planned for November 29th.
This is a heavy blow, especially for the many organizers who have been working around the clock for months to bring hundreds of thousands of people out into the streets of Paris. It's a heavy blow, too, because it makes our job -- of making sure this summit actually yields real, ambitious results -- that much harder.
While activists in Paris are revising their plans, it's up to the rest of us to kick it up a notch.
The Global Climate March -- which already consists of thousands of events, small and large, all around the world -- will continue. From London to Los Angeles, Quito to Quezon City, people are still taking to the streets.
Click here to find an action near you, or to start one of your own on November 28th-29th. There couldn't be a more important time to step up to the plate.
Organizers in Paris are still reeling from Friday's terrible attacks, and now they're scrambling to figure out what they can still do to have an impact in the face of a potentially repressive security situation.
We need to speak up for activists in Paris, who are struggling to be heard. Those of us who can mobilize, must. The Paris Climate Summit is still a crucial opportunity for world governments to send a signal that the world is moving away from fossil fuels. In fact, it's becoming increasingly clear that the world needs this sort of global cooperation urgently.
Even as climate change contributes to conflict around the world, this summit is an opportunity for us to come together and finally grapple with the scale of the problem we're facing. Unfortunately, that's not the sort of ambition that governments and politicians muster on their own. That's the sort of thing only mass social movements have the power to make happen.
You can help make it happen. Now is the time to find an action near you, or get one going with your friends and family.
Going to actions and protests -- even leading actions and protests! -- isn't just the domain of seasoned organizers. Most of the events already on the map as part of the Global Climate March are hosted by regular people -- people with jobs, families, and regular lives. The only thing that makes them particularly different is how much they're willing to take action for what they love.
Take action with us on November 28th-29th. Extraordinary times call for doing extraordinary things.
Yesterday's news was a setback, but we're not packing up and going home. Not by a long shot. This just means that we need to get louder everywhere.
I hope you'll help us do that.
Onward,
Payal