Indigenous Environmental Network Delegation Travels to Paris for UN Climate TalksOver 45 Frontline Leaders Will Participate Inside and Outside COP21
Bemidji, MN – The Indigenous Environmental Network (IEN) is taking a delegation of over 45 Indigenous frontline leaders from across North America to participate inside and outside the 2015 United Nations Framework Convention on Climate Change in Paris, France. The conference, also known at the Conference of Parties 21 (COP21) will run for two weeks from November 30th to December 12th, 2015, with the intended objective of achieving a binding and universal agreement on climate, from all the nations of the world.
The Indigenous Environmental Network’s delegation is a diverse group of Indigenous spokespeople from across North America who are representing various issues and campaigns directly affecting Indian Country, in regard to extractive development and community-based solutions to climate change. IEN will be joined by  a sister organization called Grassroots Global Justice, together forming a 100-person delegation titled, “It Takes Roots To Weather the Storm”.
The Indigenous Environmental Network is a registered civil society, non-governmental organization with the United Nations and will have accredited delegates inside the civil society forum of the climate negotiations as official observers. IEN will also have delegates participating in a number of “outside” events, actions, and meetings happening throughout Paris during the two weeks of the conference.
It is the intended goal of IEN to influence the climate negotiations for the explicit purposes of achieving four core demands from the COP21:
As a means to accomplish this goal, IEN will be performing a series of cultural demonstrations and public events throughout Paris to raise awareness of critical issues affecting frontline communities. Some of which are as follows:
A critical component of the IEN delegation is the emphasis on Indigenous women and youth leadership. The Indigenous Environmental Network is one of the founding signatories of the Indigenous Women of the North and South – Defend Mother Earth Treaty Compact 2015. This historic document will be presented at a press event on December 6th, 2015. IEN will also be bringing 13 Lummi youth from the Puget Sound area of the United States to encourage in-depth participation by our future leaders and generations.
Our current list of key spokespeople and their respective focal issues:
For more information: schedule of events, blogs, podcasts, delegation information and media please visit www.IndigenousRising.org.
### 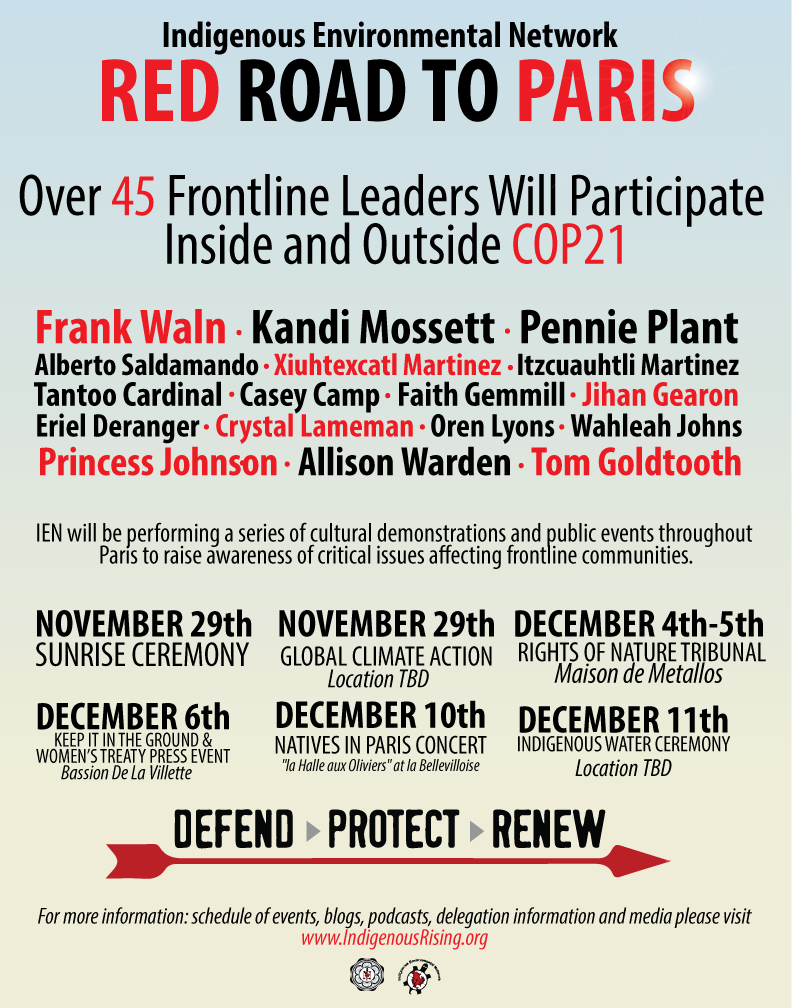