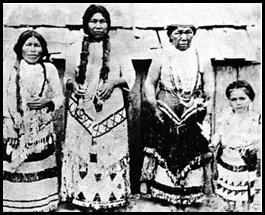 SAN FRANCISCO -- The AIM West Conference revealed the true history of the California Indian Missions. It is a history of slavery, beatings and murder. It is a history that the Pope refused to recognize when he honored the brutal priest Junipero Serra.

Valentin Lopez, Chairman of the Amah Mutsun Tribal Band of Costanoan Ohlone Indians, described the true history of slavery and cruelty, beatings and murders, of the California Indian missions.

Lopez chronicled the history and opposition to the recognition of Junipero Serra as a Saint.

"We need to tell our own truth."

Lopez said the beatings and atrocities of California Indians carried out by Junipero Serra were carried out with the moral authority of the Pope.

"That does not come from the Creator. That comes from evil."

Earlier, Lopez wrote a poignant letter to Pope Francis sharing a Native perspective on why Junipero Serra should not be named a Saint. The campaign became global, with media coverage as far away as the BBC.

"We did a lot to get the world out. We were totally ignored," Lopez said during his presentation on the second day of the annual American Indian Movement's west coast conference here.

Lopez said the Pope did not respond to their letters.

"The truth didn't matter," he said. The Pope wanted an Hispanic Saint.

However, Lopez said, "We are claiming victory. We got the word out. The church kept it under wraps as best they could."

Now, the horror of the history of California Indians in the missions is becoming known globally. Fifty eight California tribes opposed the canonization of Junipero Serra.

"California wanted to exterminate the Indians. They didn't want any damn treaties," he said of the history in the 1800s.

The US created laws to kidnap and steal Indian children. They killed the parents.
"They bought the girls to use them."

The US created laws to force Indians into indentured servitude. Since Indians could not talk in the courts, farmers would claim Indians trespassed on their land. Then, farmers seized Indians as indentured servants. This slavery of California Indians continued into the 1930s.

The state paid over $1.7 million for military expeditions to murder California Indians. In the process, the environment was destroyed, including the deer and the basket making plants.

"This is the way the land was taken by the whites."

Lopez said many of the treaties of California Indians were sealed because California sabotaged tribal recognition.

Lopez said the Papal Bulls led to this.

The Papal Bulls led the United States to falsely claim that Indians did not own their water rights, but only had the right to use the water on their land.

Lopez said there must be tremendous pressure put on the Vatican and the United States to rescind the Papal Bulls.

Twelve million people were put into slavery in Africa alone because of the Papal Bulls.

Jesse Riddle described the assassination chairs to kill Indians. A nail was placed in a chair. Indians were seated in the chair and then the nail was banged into the neck of Indian people to assassinate them. Their bodies were then used as a commodity, to make chairs and other items.

The AIM West Conference began its second day with scholar and activist Dr. Roxanne Dunbar-Ortiz, author of An Indigenous Peoples' History of the United States. Dunbar-Ortiz spoke on the Doctrine of Discovery and colonialism.

Although some scholars urge rescinding the Doctrine of Discovery, not all Native Americans view it as important, or even something they want to hear about, as was revealed in the discussion at the AIM West conference.

During her presentation, Roxanne Dunbar-Ortiz described how the Christian monarchies of Europe were required to obey the laws of the Vatican, including the Papal Bulls.

She described how Europeans were on the quest in the spice trade in the 1400s. This is how Columbus proposed the voyage to Indonesia. However, Columbus "bumped into this continent they didn't know existed." she said.

Already slavery was underway, even though it was not legal. So, a law was created for Portugal to legalize slavery and steal slaves in Africa in 1455. It gave Portugal the right to colonize Africa, she said.

Beginning in the Twelfth Century, armed Christian crusaders were attacking Moors. They were burning Arabic books in Spain, as they invaded those towns. There was an inquisition to investigate the "cleanliness of blood." It was to determine if Moors, Muslims and Jews had converted.

It was a time of governing by the sword.

Columbus was a mercenary, in the Crusades, and militarized. They were attacking the Arabs.

Describing the voyage, she said, "Columbus went for Spain." At the same time, ship loads of Jews were being deported.

Then, there was another Papal Bull that gave Spain permission to claim new lands.

Eventually, the British acquired these laws. Then, the United States also acquired the Doctrine of Discovery and made it law.

"We have to organize around it," Dunbar-Ortiz said.

She said people in the United States today find the Doctrine of Discovery unbelievable. They question why they did not know it existed.

Standing Elk said she doesn't need to hear about the Doctrine of Discovery.

Standing Elk said there are three governments that carve up the world when there are world wars.

During the AIM West Conference discussion, the question of the creation of 'Thanksgiving'
was questioned.

Dunbar-Ortiz said Thanksgiving began as a time of prayer, but was changed into something
different. She said it became part of the United States' origin story, a political story which includes
the Fourth of July.

"The US origin story is a political weapon."

During the afternoon of the second day of the AIM West Conference, the panel was, Mascots in Sports: Organizing for Social Justice, focused on bay area public schools and national sports teams, with Dr. Blu Wakpah, Tria Wakpah, Angel Hart, Philip Mehas, with Molly Batchelder. Thanks to Karen Wright for the photos below.

Dunbar-Ortiz' book is described as: In An Indigenous Peoples’ History of the United States, Dunbar-Ortiz adroitly challenges the founding myth of the United States and shows how policy against the Indigenous peoples was colonialist and designed to seize the territories of the original inhabitants, displacing or eliminating them. And as Dunbar-Ortiz reveals, this policy was praised in popular culture, through writers like James Fenimore Cooper and Walt Whitman, and in the highest offices of government and the military. Shockingly, as the genocidal policy reached its zenith under President Andrew Jackson, its ruthlessness was best articulated by US Army general Thomas S. Jesup, who, in 1836, wrote of the Seminoles: “The country can be rid of them only by exterminating them.”
Posted by Censored News, publisher Brenda Norrell at November 25, 2015

"California wanted to exterminate the Indians. They didn't want any damn treaties," he said of the history in the 1800s.

The US created laws to kidnap and steal Indian children. They killed the parents.
"They bought the girls to use them."

The US created laws to force Indians into indentured servitude. Since Indians could not talk in the courts, farmers would claim Indians trespassed on their land. Then, farmers seized Indians as indentured servants. This slavery of California Indians continued into the 1930s.

The state paid over $1.7 million for military expeditions to murder California Indians. In the process, the environment was destroyed, including the deer and the basket making plants.

That is good evidence but where is the evidence against the Missions? You provided no evidence of that.. Have you ever considered that, "The Missions" saved a dying race due to Goverment Genocide? Just maybe. they saved the survivors & t was a very hard task to do.