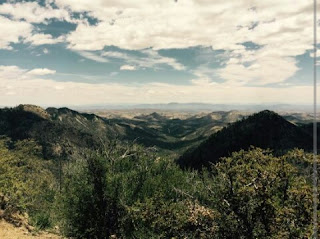 
Albuquerque's Poet Laureate Opposes Gila Diversion
"Everywhere is a Gila," song and video, calls on the public to contact Sally Jewell
Albuquerque, NM – Today, Albuquerque's Inaugural Poet Laureate (2012-2014), Hakim Bellamy, released his latest song, Everywhere is a Gila, to draw attention the looming deadline for Secretary of the Interior Sally Jewell to sign an agreement with New Mexico that would allow a billion-dollar diversion of the Gila River to go forward.  The song, accompanied by aerial and ground shots of America's first wilderness area and the adjacent area slated for diversion, encourages listeners to take action by writing to Jewell in opposition to the project.
"My son is 8.  My job is to share with him all the beauty I've ever been fortunate to find in this world. The Gila is part of that beauty. I did this song because I don't know what else to do. I'm an artist. I generally feel powerless unless I am 'arting.' It's what I know how to do to impact change. It just seems ridiculous to get rid of something our state is known for, unless we've tried every way possible to preserve it first. I hope that this video won't be essentially an artifact to show the beauty of the Gila for posterity," said Bellamy.

Aerial images of the Gila were shot on a Sierra Club overflight with CAVU, a non-profit organization that uses flight, film and education to aid in social justice and conservation issues. The video work illustrates the natural beauty of the Gila while the song to light the risk to this very special place, said CAVU Executive Director David S. Smith.
"It is difficult for me to imagine a clearer issue than the proposed diversion of the Gila River. Almost 100 years ago, the Gila was designated the world's first Wilderness Area.The world's first. That fact should be sacrosanct. Let's leave this place alone, so that our children, and our children's children, and their children may love it, and learn from it," said Smith.
To see the video and sign the petition people can visit vimeo.com/145556089. The petitions can be found directly at: bit.ly/SavetheGila.
"The proposal to build the Gila River Diversion is a billion-dollar boondoggle that will benefit private consultants more than any actual water users. Scientific evidence shows us that the diversion will pump more sand than water, and it will be New Mexico taxpayers that have to foot the bill. We can save more water now by implementing conservation projects that we already have the money in hand to carry out.  The time to take action is now. We hope people will watch the video and write to Secretary Sally Jewell before it's too late," said Camilla Feibelman, Director of the Sierra Club's Rio Grande Chapter.
Everywhere Is A Gila - https://vimeo.com/145556089
Everywhere is a Gila
Make you a believer,
Jesus, where is a miracle when you need one
Sermon on the Mount
Is what the people asking for
cause 5 loaves and 2 fish ain't enough to feed the poor
Wilderness gotta eat
And the River is the source
Everybody wanna piece
when the profit is enormous
Especially when it's free
cause taxpayers are payin' for it
Tell Governor Martinez our families are getting torn up
Separating mother earth, from her grandsons and daughters
A Billion dollars deported
a runoff of our resources
Evaporating the forest
New Mexico can't afford it
First they walled the border
Now they wallin' the water
A living organism
our watershed could use a lawyer
Save the flora y fauna,
that don't get no human rights
And the river their aborting
while praying to be pro-life


Gulf War fossilized, Thermo is threatening
Even Turbine, Condensers need that hydroelectric
Now that Mars found water, Orson Welles is a prophet
Cause the next world war gon' be about water


Ever see the sunlight marble on the canopy floor
Picking rocks out the river, grandkids on all fours
Gonna miss the babbling brook bliss when it's gone
after drownin' our future in the baptism waters
Way down by the riverside burial sight
where generations of Gila River Indians bore life
we talkin' bout more life, Interstate Stream Commissioners
and elected officials think of your future constituents
4 -legged or two, actin like you're superior
so we floodin' your office Secretary of the Interior
fountain penning these letters, freezing the phone lines
an acre of water on your bathroom floor ought to remind ya
this is survival, like a water balloon fight
'cept the only thing we're full of is inflation and tax hikes
Our people are high and dry, on this side of the state line
First National Wilderness torpedoed by states rights