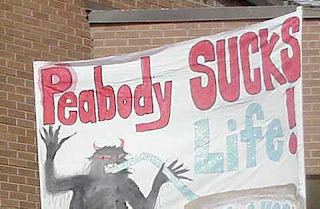 What do Peabody Coal, Barrick Gold in Nevada, and Shell Oil in the Arctic, all have in common?
All three are cutting back on operations due to plummeting profits and worth. These three corporations never cared about the earth, Indigenous Peoples or the protests.
Still, the protests have succeeded in creating a new global awareness of climate change. They have made people around the world aware of the damage and destruction, displacement and disease from coal, gold and copper mining, oil and gas drilling, fracking and coal fired power plants.

However, without the loss of dollars and profits, neither the corporations, nor their partner the US government, would have cared less.
Peabody Coal now admits that the divestment campaigns -- which meant a loss of wealth -- did work.
Now, under probe by the New York Attorney General for climate change lies and inflating worth, Peabody agreed to tell investors of the lessening demand for coal and the impact of divestment campaigns.
The next step, as suggested in the probe and news coverage, is for those with claims against Peabody Coal to file lawsuits similar to the tobacco lawsuits.
These lawsuits will hold Peabody Coal responsible for its lies and cover-ups -- resulting in disease and death -- long after the facts were known about Peabody's coal mining and its role in feeding the dirty coal fired power plants, including those on Black Mesa on the Navajo Nation.
http://mobile.nytimes.com/2015/11/09/business/energy-environment/peabody-energy-agrees-to-greater-disclosures-of-financial-risks.html?ref=business&_r=1&referer=
at November 12, 2015