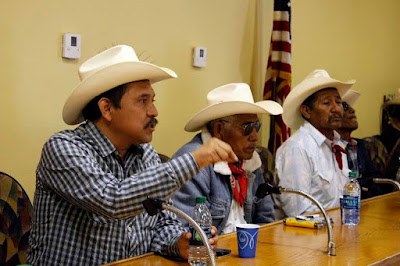 Yaqui Mario Luna Romero, falsely imprisoned in Mexico for one year,
speaks to Pascua Yaqui Nation in Arizona. Luna was abducted
and Mexico refused to release him for one year, even after judges
ordered his release. 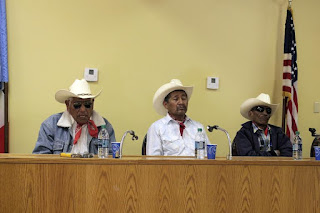 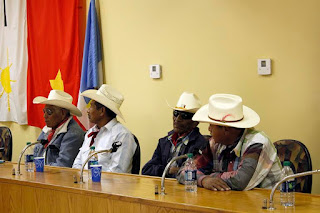 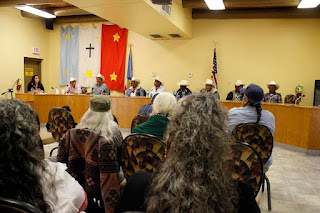 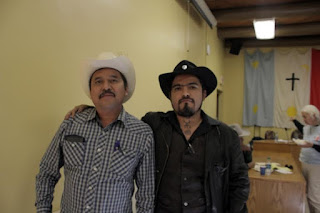 Yaqui from Sonora, Mexico, address Pascua Yaqui Nation in Arizona
Yaqui water rights defenders from Sonora, Mexico, spoke out in defense of their rights to water of
Rio Yaqui. When Mexico constructed the Independence Aqueduct to divert Rio Yaqui water to the City of Hermosillo, Yaqui responded with a highway barricade. The highway water rights blockade, on a busy coastal trucking route, began in 2013 and continues.

PASCUA YAQUI NATION -- Mario Luna Romero and the Rio Yaqui Kovanaos Community Forum was held on Saturday, November 21. The Elder Kovanao blessed and greeted all of us in his Native tongue.
Mario Luna Romero gave a report on the water blockade. He reported on the filing of court documents with the federal Mexican Court. The court has ruled in favor of the Yaquis. He also reported on he filing of the water defense petitions with the Inter-American Human Rights Commission, which they have gone before a couple of times. No decision has been made as of now because it is a slow process.
The group of eight from Rio Yaqui were very happy to be here and to share their story, the plight of Rio Yaqui and the historical survival story of the struggle of the Rio Yaqui Sonora, Mexico Yaquis.
It was a very informative and good event. They were greeted by a small crowd that came to meet them, participate, support and listen.
I sincerely thank the following people that help set-up and cleaned after the event: Thalia Gomez, Paul Hernandez, David Jaimez, Roberto Rodriquez, Mary-Lou Aguirre. To the many friends and supporters who donated money to help with lodging and meals for our invited Yaqui guest, to Rosemary Tona-Aguierre for all the good and tasty food and others that donated sweet bread/water. Thanks to Mary Lou for Aguirre for the very good cake! At last but not least, to Adam for video taping the event.
at November 25, 2015