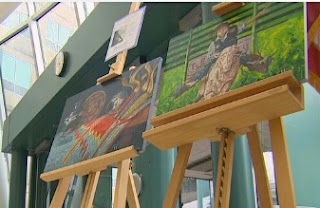 
FBI interferes with exhibit of work by the renowned Native American artist Leonard Peltier
An art exhibit commemorating National Native American Month at the state Department of Labor and Industries building, Tumbwater, Washington, is being dismantled in response to complaints received from law enforcers.
"This is overt government censorship and it's unconstitutional," said Peter Clark, co-director of the International Leonard Peltier Defense Committee.
"Former agents of the FBI, joined by State police officers, have imposed their personal views on the citizens of the State of Washington.  It's ironic that in celebration of Native American Month, the government is suppressing freedom of expression by a Native American.  But everyone should be alarmed by this occurrence.  Once you allow the censorship of an artist by government, you give it the power to censor everyone."
Those opposing the installation of the artwork were not offended by the content, which reflects Native American culture, but the artist.  Leonard Peltier, who maintains his innocence, was convicted in connection with the 1976 shooting deaths of two agents of the Federal Bureau of Investigation on the Pine Ridge Reservation, South Dakota.
"We are certain that had Peltier gone to trial with his co-defendants, who were acquitted on grounds of self defense; had he been allowed to present all of the evidence in his defense; had a racist juror exposed during trial not been allowed to remain on the panel; and had critical ballistics evidence reflecting his innocence not been withheld, Leonard Peltier would be a free man today."
Appellate courts have repeatedly acknowledged evidence of government misconduct in the Peltier case—including knowingly presenting false statements to a Canadian court to extradite Mr. Peltier to the United States, and forcing witnesses to lie at trial.  The federal prosecutor has twice admitted that the government "can't prove who shot those agents".
According to the 8th Circuit Court of Appeals "the FBI used improper tactics in securing Peltier's extradition from Canada and in otherwise investigating and trying the Peltier case."  The court concluded that the government withheld evidence from the defense favorable to Peltier "which cast a strong doubt on the government's case," and that had this other evidence been brought forth "there is a possibility that a jury would have acquitted Leonard Peltier".
As late as November 2003, the 10th Circuit Court of Appeals acknowledged that "…Much of the government's behavior at the Pine Ridge Reservation and its prosecution of Leonard Peltier is to be condemned. The government withheld evidence. It intimidated witnesses. These facts are not disputed."
Imprisoned for nearly 40 years, Peltier—71 years old and in declining health—has been designated a political prisoner by Amnesty International. Nelson Mandela, Desmond Tutu, 55 Members of Congress and others—including a judge who sat as a member of the court in two of his appeals—have all called for Peltier's immediate release.
at November 14, 2015

You can find my comment & disgust posted on my FB page. Tomilee Edmonson

If George W. Bush can grant amnesty to the TRAITOR Scooter Libby (and his boss, Karl Rove), then surely President Obama can free Leonard Peltier.

Mr. President, if this political prisoner dies in prison on your watch because you knew he should be freed but you didn't act for fear of scorn from the FBI, it will stain your record forever. And if Mr. Peltier or any diabetic prisoner dies because you let the federal prison system deny them the diet they need, their death would be at your hands.