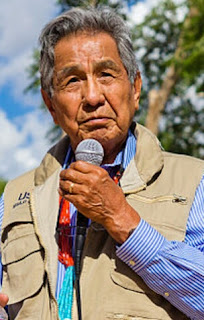 Hi Brenda,
So nice to have you write about the theft of Navajo Water Rights. What you wrote is 100% true. At the time of accusations and litigation (1987-90) few people knew what was really happening; including myself.
But looking back, I saw what has happened after I was sent to prison, I now know the real reason the feds were after me.
Brenda, you may or may not know but in the early part of my administration (1972) I, along with my one lawyer, George Vallasis, decided to challenge the so-called Colorado Water River Compact.
We, the Navajo Nation, did two things: 1. we appropriated several millions dollars and hired the west's foremost water experts (Williams Brothers of Tulsa, Okla.) to have a major water right study within the four corners region, the region covering the original Navajo Land (within the four Sacred Mountains). 2. We, Navajo Nation, challenged the state of New Mexico for their claim to water rights to San Juan, Animas, and Rio Grande rivers.
This challenge was filed in Federal District Court in Aztec, New Mexico. After New Mexico learned that we, the Navajo Nation, had retained water experts who were doing research for us, they, New Mexico, decided to postpone litigation in Aztec Federal Court.
Williams Brothers finished the study for us within three years time.
The next move was for us to file in Federal Court again using Winters Doctrine -- the most honored U.S. Supreme Court decision regarding Native American's rights to all waters within their land and jurisdictions. Mind you, this was in early and mid 1970s.
At the same time we asked William Brothers to design us a water transportation system (similar to CAP) that would make water available in large quantity (to all parts of the reservation) to meet our needs for today and in the far future where an additional 5 or 6 million acres or our reservation land can be put into irrigation farms.
After the Navajo water project was finished by William Brothers, we took it to Senator Pete Domenici and asked for federal funds to underwrite the Navajo Water Project.
Domenici was surprised to see all that we had done to claim our full share of the waters within the Four Sacred Mountains.
The project at that time was estimated to cost 250 to 300 million dollars.
Domenici asked if we could meet with the Bureau of Reclamation on this matter so the federal government could be informed as to the degree our proposed Navajo Water project is going to effect water claims within the area.
We told Domenici we, the Navajo Nation, were willing to go to court using Winters Doctrine as the basis of our claim.
We were right at the top of our water claim when I lost to Zah in 1982. When I came back in office in 1986, I learned that the Water Right studies were gathered (reams of dwgs, documents, researched materials, etc.) and put into a tribal warehouse and William Brothers fired.
The rest of the story is sad, sad, sad. What we have now is just a small fraction of what we, the Navajo Nation, is entitled to by Supreme Court ruling.
Worse yet, in all of the so-called Navajo Water rights settlements we waived our rights to use Winters Doctrine in the future.
I can't believe, anyone in his or her right mind can give away the rights they have to a billion dollars and settle for a couple of hundreds. And sign into the agreement that you will NOT forever raise your voice again for any addition water or claims you may have against the thieves.
Thank you  Brenda.

Previous article by Brenda Norrell, Censored News, 'US Theft of Water Rights and the Prosecution of Peter MacDonald'
http://www.bsnorrell.blogspot.com/2015/11/us-theft-of-water-rights-and.html?m=1

Navajo Water Rights Give Away, 'The Road to Termination,' by Jack Utter
http://www.bsnorrell.blogspot.com/2015/11/navajo-water-rights-give-away-road-to.html