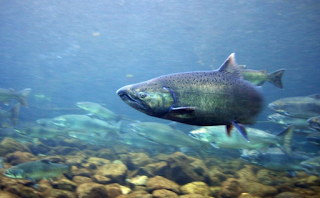 While the FDA may have approved AquaAdvantage salmon for human consumption, these “Frankenfish” and all Genetically Engineered Organisms (GEOs) are now banned on the Yurok Reservation on the Klamath River in northwest California. This ordinance is apparently the first of its kind in the U.S. to specifically address the AquaBounty Technologies’ application for AquAdvantage Salmon, an Atlantic salmon that reaches market size more quickly than non-GE farm-raised Atlantic salmon, as well as all GMOs.