John Kane 'Ethnic Cleansing: But by who and for who?'


Ethnic Cleansing; But By Who and For Who? The Farce of Blood Quantum Requirements! 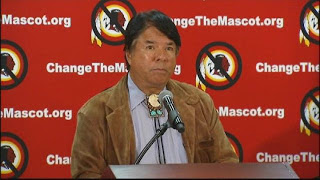 A picture of hypocrisy: Ray Halbritter, slayer of Redskins and protector of Bluebloods.

.
There is probably no greater threat of extinction to Native peoples than the measure of those people by the irrelevant, scientifically false and prejudicial use of blood quantum or pedigree to determine a identity and inclusion/exclusion. There can only be one conclusion to this practice and that is what was always intended, our elimination. Blood quantum or "Indianness"is not a Native concept. It is not "traditional." No Native custom or culture ever measured their people by full, three quarters, half or one thirty-second. This was all a white man concept. And right from the beginning the idea of "watering down" the blood was a definite part of the genocide of our people. I am not just talking about the culture of rape that is well documented with Columbus' men and continues today. It's more intentional than that. A study of the sterilization of young Native women, a US government policy that began in residential schools and continued till fairly recently, reveals that the emphasis was on the "full-bloods" because the half-breeds were already on their way. Enrollment, blood quantum and residency all became tools of the Bureau of Indian Affairs (BIA) to simply eliminate us with a pen. Of course this is coupled with massacres, death marches, starvation, disease and the forced exodus and dispersement of our peoples from our lands.

Ironically, today blood quantum is not an imposed policy of the US government (although Canada still dictates enrollment criteria on many levels). It is an all too common policy of those Native peoples who have been reduced to "tribes, bands or nations of Indians subordinate to the United States" to punish, control, manipulate and eliminate their people by disenrollment or denied enrollment over pedigree. This has been driven by greed, entitlements and general abuse of power but leads to only one end; ours.

Many Native peoples have a range of methods to determining their identities, lineage and population. The Haudenosaunee and many others have a matrilineal system of identifying the distinction of peoples and family. The proverbial "you follow your mother" was the method to determine which clan and, specifically for the Haudenosaunee, which of the 49 families a person would identify as. This loose system is tens of thousands of years old and I say loose because the Haudenosaunee was always a culture of inclusion where adoption and absorption of peoples not physically born into these families was commonplace and a normal fact of life and would never be questioned.

But the "humanities" as determined by Greeks, Romans and Christians was built on hierarchies, class, and where individuals stood on the scales of civilization and human development. With Europeans came European ideas and influences. For the most part, the Haudenosaunee maintain the matrilineal system. Alienation has crept in other ways with the self righteous developing other means of exclusion but on blood quantum the Oneidas under the rule of their BIA recognized supreme leader Ray Halbritter stand alone.

Halbritter used some of the influential Onondaga icons to seize power as the sole leader of the "Oneida Indian Nation (OIN) of New York" back in the late 1980s. He then rewrote Oneida customs by crafting his official enrollment list of Oneidas (that list includes "Oneidas in good standing" and those who aren't). Along with his new list was his new list of enrollment requirements which include…, you guessed it, blood quantum.

Halbritter's ascendency to the OIN throne came with enough Onondaga Faithkeeper Lyons bidding that a complete departure form "tradition"would have looked bad so he kept a matrilineal component but put a blood quantum requirement of "Indian" blood at a minimum of 25%. Now some would say that is reasonable and, of course, IT IS NOT for a variety of reasons that will ultimately haunt all those who do such a thing but there are several problems with Ray's quarters. According to the unwritten OIN rulebook "Indian blood" can only come from a "federally recognized tribe." So in spite of the fact that more Haudenosaunee live north of the imaginary line between the US and Canada NO Native ancestry counts for Halbritter's OIN. Of course, all of the non Fed Wrecked Native peoples are also not OIN recognized either.

Now add on to this arbitrary system of exclusion; politics, prejudice and "bad blood" and Oneida enrollment is just a game; a rigged game with bad consequences. Halbritter bursts on to the national stage as the "Redskin" slayer in a feeble attempt overshadow his failed handling of land claims, land title, gaming revenue and taxation while playing ethnic cleanser with his own version of "Bluebloods." There you go, Daniel Snyder, a name Halbritter would have to endorse.

Being Native is not about skin color or blood quantum. It is about being a people. It is about relationships, shared culture, language and distinction. While many Native people are concerned about loss of identity, rating each other by blood quantum is a fool's game. Dictating who the good Oneidas are and who the bad ones are or what is a "good Indian" forgets what Sheridan said: "The only good Indian is a dead Indian."
at March 05, 2016 3 comments: