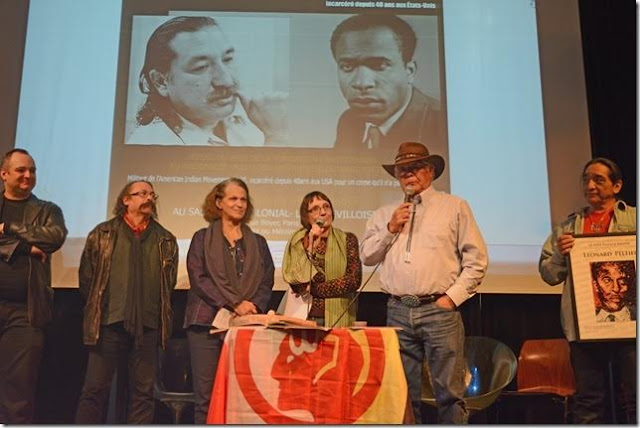 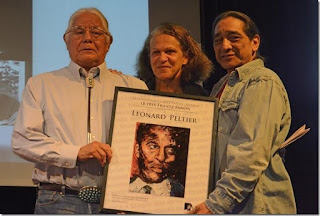 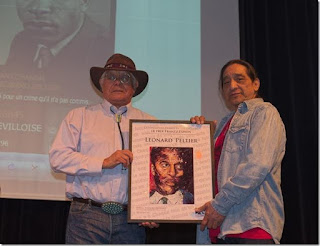 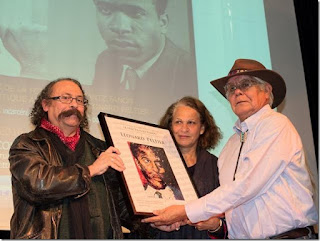 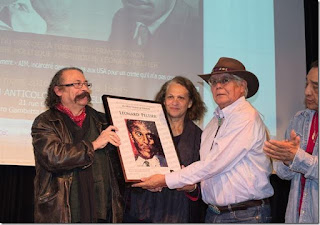 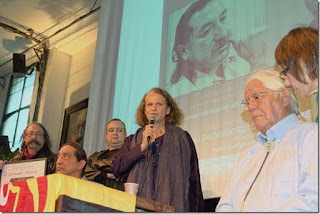 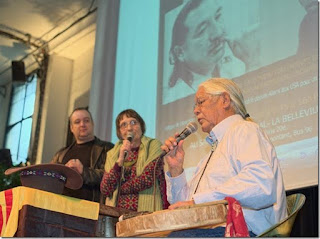 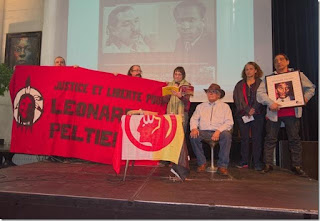 PARIS (Sunday March 6) -- Leonard Peltier was awarded with the Frantz Fanon Prize 2016. It happened in the context of the Anti-Colonial Week. Many people attended. There were delegations from many countries and associations (Algeria, Morocco, Chiapas, Peru, Africa, homeless people, undocumented immigrants, against French policy in Africa (including uranium mining by AREVA), and many more). The prize was awarded by Mireille Fanon Mendès France, Frantz Fanon’s daughter and chairwoman of the Frantz Fanon Foundation, and the artist who designed the Prize, Mustapha Boutadjine, and received in the name of Leonard by Lenny Foster, Diné, member of the AIM, representing Leonard Peltier. Mireille Fanon Menès France talked about the goals of the Foundation, about Leonard Peltier and the other political prisoners they support. Poems by Leonard were read and translated. This time Leonard was not allowed by the prison’s authorities to record a statement, thus his statement was read by Lenny Foster, member of the AIM, representative of Leonard Peltier, and translated in French by Edith Patrouilleau, vice-chairwoman of the CSIA-nitassinan (Committee for Solidarity with the Indians of the Americas). 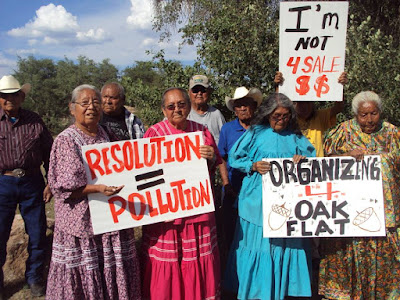 Photo by Sandra Rambler, San Carlos Apache
Respect our tribal elders! Hear their voices! They are our "walking dictionaries" and they speak the truth! They are preparing to meet with Jane Sanders, wife of U.S. Presidential Candidate Bernie Sanders at Chi'Chil'Bildagoteel (Oak Flat). Some of these tribal elders have passed on and may rest in peace. Their voices are not forgotten...
(Picture: Apache tribal elders gathered at the Gila Pueblo College in Globe AZ in 2014 ready to set the record straight with Arizona Congresswoman Ann Kirkpatrick about her refusing and not Protecting Oak Flat) -- Sandra Rambler 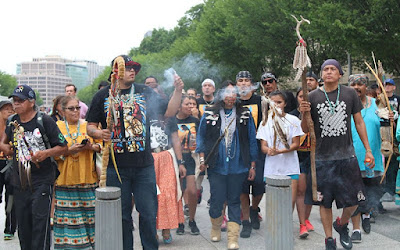 WHERE: OAK FLAT
(Hwy SO, 4 miles East of Superior, AZ)

Oak Flat , AZ. March 7, 2016 -We are pleased to announce that Jane Sanders, wife of Presidential Candidate Bernie Sanders, will be visiting Oak Flat on Sunday March 13, 2016.

Ms. Sanders will meet with the Apache Stronghold, a group of activists taking a stand to protect the sacred
land from destruction by Resolution Copper, a subsidiary of foreign mining giants Rio Tinto and BHP Billiton.
Oak Flat -- a site of immense religious and historical meaning, awe-inspiring scenery, and vital to the spiritual
life of the Apache people -- is of special importance to Senator Sanders.

In November he introduced a bill , the Save Oak Flat Bill, to repeal the land transfer to the mining
conglomerate, which was slipped in, through backroom deals, as a midnight rider to the must-pass NOAA in
the end of 201 4.

Ms. Sanders' visit comes just as the National Park Service announced Friday that it has listed Oak Flat on the
National Register of Historic Places.

Ms. Sanders will meet the Save Oak Flat activists who have been occupying the site for more than a year, as
well as with Tribal Leaders, elders, and members to discuss the importance of the site and highlight to the
members of the press the need to pass the Save Oak Flat Bill that Sen. Sanders has introduced in the
Senate.

"Federal policies must change for us and all Americans in this country in order to secure the future for those
yet to be born. We must not lose these holy places, for they are the fabric of who we are to Mother Earth."

The event will include a tour of culturally-significant sites, a discussion with stakeholders, and time to address
the members of the press. 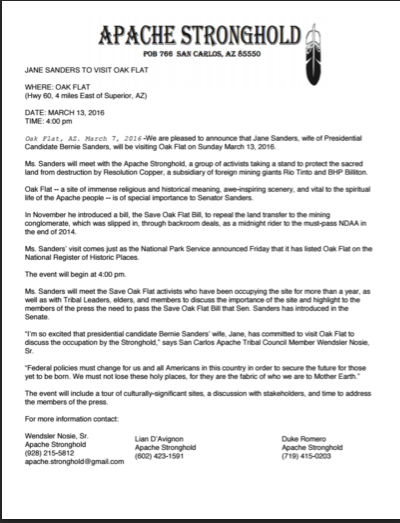