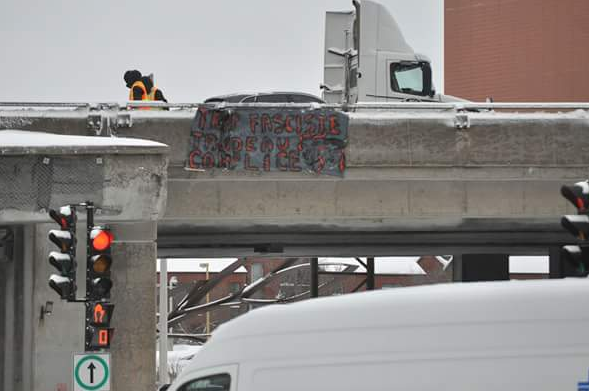 MONTREAL--  (February 13, 2017) As of 8:30am this morning, at the height of morning rush hour traffic, a large banner reading "Trump Fasciste, Trudeau complice" [tr: "Trump fascist, Trudeau accomplice" is hanging off the Trans-Canada/Metropolitan Highway in Montreal, facing Justin Trudeau's new constituency office at the corner of Crémazie and Christophe-Colomb.
On the same day that Justin Trudeau is visiting Donald Trump in Washington, DC, the individuals responsible for the banner drop -- the "Open The Borders" Collective -- are denouncing the complicity of the Trudeau government with Donald Trump.
According to Aimée Arseneault of the Open The Borders Collective: "Grassroots movements can take credit for preventing a Trump visit to Ottawa, but Trudeau's visit to DC today needs to be condemned. It represents a normalization of far-right, anti-immigrant politics, and reveals the complicity of all members of the ruling class."
In the words of Jaspal Grewal, member of the Open the Borders Collective: "There has been three weeks of ceaseless racist attacks on the rights of migrants, particularly Muslim migrants, by the Trump administration, yet the Trudeau government still refuses to open the borders to refugees and undocumented migrants, or to cancel the regressive "Safe Third Country" Agreement with the USA, let alone consider a regularization of the more than 500,000 undocumented people living in Canada. Incredibly, with the recently proposed Bill C-23, the Trudeau government wants to expand the power of US border agents in Canada."
Grewal adds: "Trudeau tweets superficial platitudes, but the reality of his policies shows hypocrisy and cowardice."
In addition to calling for a full opening of the Canada-US border to all migrants and refugees seeking security and safety, the Open The Borders Collective also condemns Trudeau's attempts to salvage the destructive North American Free Trade Agreement (NAFTA). The banner used for today's action is a re-purposed anti-World Trade Organization banner from 2002 (reading: WTO: Global Apartheid in French), at the height of anti-capitalist mobilizations against neoliberalism.
"Trudeau is sacrificing the rights of migrants and refugees, and normalizing Donald Trump, in order to try to preserve colonial-corporate trade deals for the benefit of mega-corporations and Liberal Party funders," stated Arseneault.
"A grassroots movement that combines anti-colonial, anti-capitalist opposition to neoliberalism, while also supporting Indigenous sovereignty and migrant justice, is necessary to defeat Trump and the Far-Right, and the people who normalize him," stated Grewal.
Both Arseneault and Grewal add together: "Today we drop a banner off a highway, a symbolic gesture of disobedience; but in the coming weeks and months, we need to engage in protracted civil disobedience and direct action to open the borders and ultimately defeat the rise of the far-right."
The Montreal "Open the Borders" Collective is sharing today's banner photos with local Montreal-based grassroots anti-racist and migrant justice organizations.
PHOTOS of the banner are available at the following link: http://bit.ly/TrudumpBanner