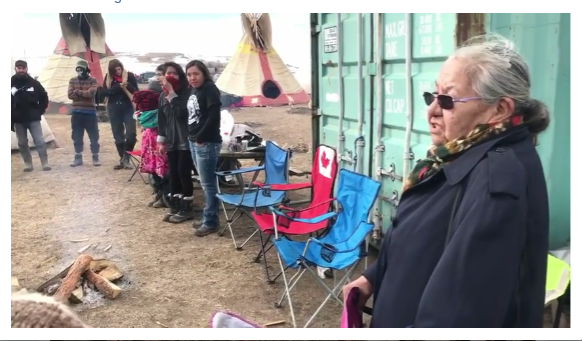 Click arrow below to watch video by Doug McLean. Screen capture above by Censored News.

CANNON BALL, North Dakota -- Regina Brave, Lakota elder, describes the vast Treaty territory here and how this war now to protect Mother Earth will be won through prayer.
Speaking at the water protection camp that is still standing, Regina describes the war on the United States that resulted in the Treaty or 1868.
"We won that war. That is the first war the United States lost."
The commissioners were told to give the Indians everything they want, she said.
"We asked for a nation to nation treaty, and we got it."
The Treaty of 1868 was negotiated by her grandfather.
The people agreed that the U.S. could dig for gold in the Black Hills, but that one-half of the gold must be saved in special appropriations for the future Seven Generations.
The U.S. did not intend to honor that Treaty.
"In 1876, they came at us at Greasy Grass."
Before they came, Sitting Bull dreamed that the soldiers were coming to annihilate them.
Regina Brave said young warriors, like those gathered here in camp, rode in and took the weapons.
"The women rode in, with the young people, on stampeding horses to take the guns away from Custer."
Then, when people came back to the land here, there were reservations.
"We have been prisoners of war for the last 140 years," she said.
It was prophesied that the nations would come together.
On the Medicine Wheel, there are Four Colors. It represents the Four Nations.
All Four Nations are gathered here, since Standing Rock put out the call to protect the water, to protect the land.
Morton County and the Army Corps of Engineers do not own the land.
This is Sovereign Treaty Territory.
"The people who stood up were from the Cheyenne River Indian reservation."
"We are holding the line until we can win. And we will win, with peace, in a peaceful, spiritual manner."
"We need the prayers."
"We stay with prayer."
She said at Standing Rock, they walked to the river, and they sang, and they prayed. That's how it should be.
Pray when the sun is rising, she said.
"We have to stop all the raping of Mother Earth that has been going on."
Now, people are making camps all over to protect the land from Keystone XL.
Regina Brave said she was at Wounded Knee, and Wounded Knee can not happen here.
"That is not the way to win this war. The way to win it is in prayer."
When all the people came from all the nations, that was the prophecy.
She remembered the words of Black Elk, as he sang the Sundance Song.
"I do this so my people will live."
"It is not just us people, but it is our future generations."

The bank became the third lender to sell its shares in the controversial project as Native Americans continue their divestment push.


By TeleSur --- BNP Paribas announced Wednesday that it had sold its US$120 million share in the joint US$2.5-billion Dakota Access Pipeline loan, becoming the third bank of the 17 involved to cut ties to the oil project amid a major divestment campaign by Native Americans and activists that was pushed for after the revival of the pipeline by the Trump administration.
“The decision to divest the loan was made following an extended and comprehensive review of the project including consultation with all the relevant stakeholders,” the French bank said in a statement announcing the move. “The sale of our stake signals the importance of full and detailed consultation on projects that impact large numbers of stakeholders.
Read more:
http://www.telesurtv.net/english/news/BNP-Paribas-Becomes-Latest-Bank-to-Dump-Dakota-Access-Pipeline-20170405-0031.html