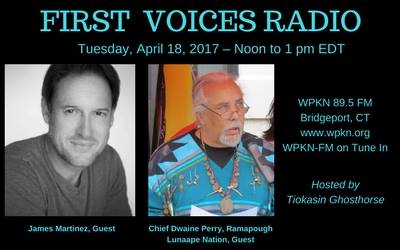 .
First Voices Radio, Tuesday, April 18, 2017 — Host Tiokasin Ghosthorse talks with two guests in this edition of “First Voices Radio.” His first guest is James Martinez, a media ecologist, radio talk show host and pioneer in radio broadcasting and behavior modification. James has long collaborated to support Cold Fusion —L.E.N.R., “low energy nuclear reactions — as fact and a necessary antidote to the liberation of the human race.
In 2013, after months of planning and at the request of the now late Russell Means, James made the arrangement for the first donated Cold Fusion device from America be given to The Russell Means Library for the Lakota Nation and for Russell Means. More information can be found at www.coldfusionnow.org and www.truthout.org. More information about James Martinez is at www.JamesMartinezMedia.net.
Tiokasin’s second guest is Dwaine Perry, Chief of the Ramapough Lunaape Nation located in Mahweh, New Jersey. Chief Perry has a long history of advocacy and has sat with elders and Indigenous leaders in the Himalayas, the Andes and throughout North America, seeking and coalescing the seeds of unity and truth remaining in the colonized mind. He champions human rights today, focusing primarily on issues concerning the Ramapough Lunaape Nation and the Indigenous community at-large.
Chief Perry's journey to Standing Rock last year resulted in the establishment of the Split Rock Sweet Water Camp in Northern New Jersey where the people have been met with much the same hostility as those at Standing Rock. Recently, Chief Perry has called for all peoples in the New York region to stand united against all forms of environmental genocide, greed and avarice. Find out more at the Split Rock Prayer Camp Facebook page.
Listen locally to WPKN-FM at 89.5 FM. Streaming live at www.wpkn.org and WPKN-FM on Tune In (noon-1 pm Eastern / 11am-noon Central / 10-11am Mountain / 9-10am Pacific / 6-7am Hawai’i.

Noon to 1 p.m. EDT on WPKN 89.5 FM in Bridgeport, Connecticut. Streaming at www.wpkn.org and on Tune In and available in the WPKN archive immediately following the broadcast. This show will be repeated on WBAI 99.5 FM, New York City, on Thursday, April 20, 9-10 a.m. EDT. Streaming at www.wbai.org and available in the station’s archives immediately following the replay.
at April 18, 2017